The four-year journey ended in control of 60,000 sq. ft. of LED real estate

Before Mercedes-Benz Stadium even opened its doors — or its retractable roof — for fans of the Atlanta Falcons and Atlanta United FC, the venue’s 360-degree Halo video display was the talk of the town. With more than 60,000 sq. ft. of video real estate encircling the stadium’s roof, it would be both the largest LED video display in North American sports and the first of its kind, requiring a first-of-its-kind workflow to deliver 360 degrees of video content.

Ross Video’s involvement in Mercedes-Benz Stadium began four years before it opened — in fact, before ground had even been broken on the state-of-the-art venue. WJHW, the consultant on the project, approached Ross Video to see what the Ottawa-based company could do to drive the 360-degree video display that had been designed for the stadium.

“At that time, there was no display-control system on the market that could drive such a high-resolution [21,517×1154-pixel] display accurately as one canvas,” says Kevin Cottam, director, Sports and Live Events, Ross Video. “Ross, being a forward-thinking, innovated technology company, were extremely interested in the opportunity to work with WJHW and Daktronics on such a high-profile project. So we immediately began internal discussions on how to develop a control system with our real-time 3D XPression render engine at the core, that would have the feature set required to produce and control content for a high-end NFL game-day production, and submitted a control-system design for the display-control bid, knowing the project was several years away from being deployed.”

Approximately two years later, at NAB 2015, Cottam, together with Bas Saleh, creator of Ross Video’s XPression, worked out terminology, feature set, development timelines, and more — and came up with XPression Tessera. According to the company, Tessera enables users to link multiple Xpression engines to create a scalable matrix of channels/resolutions for a seamless output of video — ideal for the one-of-a-kind Halo.

“Having decades of experience in the sports-venue space, we knew that displays would continue to increase in resolution, and we’ve seen the limitations of how sports venues drive their displays using multiple video/graphical inputs to a video processor and formatting the layouts through those processors,” explains Cottam. “The plan devised was to format the displays upstream of the video processors, utilizing the real-time render power of XPression, and remove any limitations with regards to resolution. 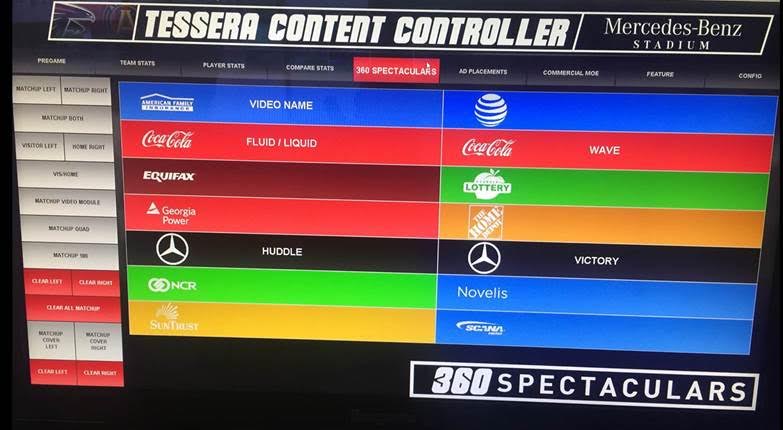 “The idea of Tessera has always been a feature set within XPression,” he continues. “There’s a feature in all standard Xpression Studio engines called Tile Mapper, which is a basic form of Tessera on a single engine. This feature gives the user the ability to frame-accurately sync multiple channels together vertically or horizontally, which allows end users to design on canvas much larger than standard HD resolutions. So we basically took that idea and expanded it to multiple engines, using a master engine to control the slave engines frame-accurately.”

After presenting the concept for Tessera at NAB 2015, Ross Video was invited to pitch its solution to the Mercedes-Benz Stadium brass within the year.

The following March, Ross Video was invited to Atlanta to participate in a proof-of-concept (POC) demo at Mercedes-Benz Stadium. Cottam was joined in Atlanta by Ross Video Creative Services Lead Designer Greg Kuh, with Saleh and Senior Software Engineer Brian Ford assisting remotely. Both Cottam and Kuh were able to demonstrate synchronized playback of 3D content across six outputs (half the Halo) — all in real time.

“I think, pretty quickly, everyone really understood the ease and use of it and what it could do for their production,” says Kuh. “One of the things demonstrated was how quickly content could be modified using a real-time render engine. I asked the room to give me a word, and someone shouted out, ‘Touchdown.’ Three seconds later, we had ‘Touchdown’ seamlessly animating across all six displays.

“We were showing off some of the social-media [capabilities] as well and had someone send an Instagram photo to the Inception Social server,” he continues. “It appeared on the displays within seconds. We continued to demonstrate the power to render 3D animations and animated a football and soccer ball in real time across all displays. That really kicked off the project.”

The Ross Video team also showed off its Dashboard control product, which would be used to control the XPression Tessera system, as well as many other devices within the stadium. 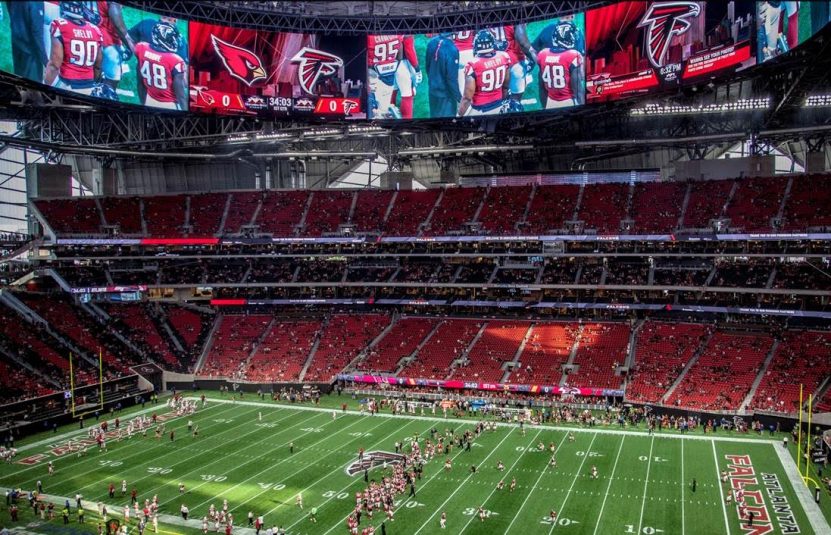 Within a week of the POC, Mercedes-Benz Stadium executives selected the Ross XPression Tessera system to drive the Halo, adding control of the Mega Column LED display as well. To build on an already powerful LED-control system, the decision was made to incorporate additional Ross products into the production-control room in order to fully integrate the two systems.

“The power to control any of our products and third-party products using our proprietary Ross Talk protocol is an extremely powerful tool for any game-day production,” Cottam explains. “The LED-control system and production-control room are one ecosystem that can be controlled/triggered from anywhere in the venue.”

Mercedes-Benz Stadium officially opened on Aug. 26 and hosted its first regular-season Falcons game on Sept. 17. For Ross Video, the opening was the culmination of years of technological innovation, creativity, and a great deal of hard work.

“When we started this endeavor to build the world’s largest video board, we knew it was going to be a complex environment,” says Pete Soto, Senior Director of Game Presentation, Events, and Stadium Productions, AMB Sports & Entertainment Group. “Ross Video was not a vendor in this process — they were a partner, and together we created a very cool presentation for the fans of the Atlanta Falcons and United.”

“A big thank you to the Atlanta Falcons for trusting in our abilities and technology and working with us on such a huge project,” says Cottam. “There was a lot to gamble here, but they decided to go in a different direction, and I think it’s paid off for them. A big thanks to  Pete Soto and [Mercedes-Benz Stadium Manager, Stadium Productions] Jason Cothern for believing in us and trusting Ross with this extremely challenging project.”