‘We are training people to follow sports and not watch games’

When NBC Broadcasting and Sports Chairman Mark Lazarus sat down with TV NewsCheck Editor Harry Jessell for a one-on-one conversation at the TV2020 Conference during NAB New York this week, sports was front and center, including the challenge of creating a new generation of sports fans who feel compelled to tune in and help stem the tide of declining ratings. 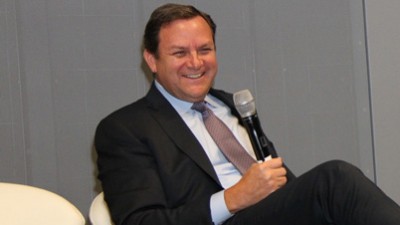 “Media habits are changing,” said Lazarus. “Part of it is the proliferation of content across the internet and the ways people get information. We are training people to follow sports and not watch games. So they are satisfied with scores and highlights rather than spending 90 minutes or more watching the game in totality.”

With respect to NFL ratings, he noted that the ups and downs are dependent on the quality of the game and that there is also a drop-off late in the evening. And, although sports should be and has been known as a uniting factor for people, what is going on in the NFL with respect to the controversy over players’ kneeling has pushed some people away from the sport.

There is one NFL game, the Super Bowl, that consistently delivers for advertisers. NBC Sports will broadcast Super Bowl LII next February during what will be a particularly busy week for the network: it begins with the Super Bowl and ends with the first day of the Winter Olympics.

“Super Bowl sales are ahead of schedule and starting to pick up steam,” Lazarus reported. “And, for the Olympics, we will have 6,000 hours of content, with every event available via broadcast, cable, or digital streaming. Also, we will be live across the country with primetime Olympic coverage, no longer tape delayed. And then we will replay for the Mountain and West time zones.”

Lazarus also discussed the future of rights and whether the long run of rights continually going up will end.

“There are some signs that things might change, like Formula One getting a deal done [with ESPN] without a rights fee,” he pointed out. “The bellwether will be the new [NFL] Thursday-night deal, and the league is expected to be in discussions on that over the next 60-90 days.”

Despite all the talk of cord-cutting, Lazarus remains bullish on the role that the broadcast and cable universe plays in maximizing a sport’s exposure. And a mix of both, such as NBC offers with both broadcast-TV and cable-network coverage, is a great recipe for a sports property, offering huge production values coupled with a quantity of hours that can allow NBC’s production teams to dig deeper into the event.

“Sports is not just about the numbers,” he added. “What is building value is the dominance