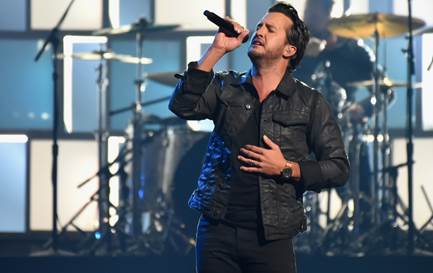 Amid the celebratory awards and unique live performances, this year’s show included a rather melancholy note, with Underwood singing the hymn “Softly and Tenderly,” honoring the passing of industry greats and the recent tragedy in Las Vegas.

Other tributes included Vocal Group of the Year winners Little Big Town with their rendition of “Wichita Lineman,” in memory of Glen Campbell, and Dierks Bentley and Rascal Flatts teaming up to deliver “My Town” for the late Troy Gentry of Montgomery Gentry.

Music mixers for the broadcast feed were John Harris and Jay Vicari of Music Mix Mobile, while attendees were treated to FOH music mixes by Rick Shimer, delivered by House PA Mixer Patrick Baltzell. Monitor mixes for the artists were provided by Jason Spence and Tom Pesa.

With all artists being free to select their preferred microphones, Female Vocalist of the Year Miranda Lambert went for the old-school look of the Shure 5575LE for a stunning rendition of her single “To Learn Her.” Music mixer John Harris was impressed with the modern sound quality of the mic, praising both Lambert and her selection. “The iconic style of the 5575LE was a beautiful complement to Miranda’s classic performance,” says Harris. “I had plenty of gain, which allowed its warm sound to sit perfectly above the mix.”

Of course, most performers used wireless microphones, and Shure’s RF dominance was hard to miss. Luke Bryan used a new AD2/SM58 wireless for his performance of “Light It Up,” while the tried-and-true UHF-R delivered vocals for a wide range of artists on Country Music’s Biggest Night.

The classic SM58 capsule sat atop UR2 handhelds used by New Artist of the Year and new Shure endorser Jon Pardi, as well as those used by Darius Rucker and Single of the Year winner Keith Urban. SM58 capsules were also paired for the duet between Shure endorser Maren Morris and One Direction vocalist Niall Horan. The supercardioid Beta 58 was the choice for Kelsea Ballerini and for Alan Jackson, among others. These popular Shure models were used together on several of the show’s legendary vocal events, including performances by Tim McGraw (Beta 58) and Faith Hill (SM58), Rascal Flatts (SM58) with Dierks Bentley (Beta 58), and host Brad Paisley (Beta 58) with Kane Brown (SM58).

Shure’s Nashville-based Artist Relations Manager Ryan Smith was also on hand. He was inspired by the quality of the evening’s performances and the sense of community and unity evident throughout the show. “The 51st CMA Awards show was filled with many emotional performances,” says Smith. “It was an honor to be there with so many music industry friends to honor those lost, and to celebrate life.”