At the SVG Summit, Panasonic and Wave Central announced the first successful field test of a new integrated wireless camera system utilizing a modified Panasonic AK-UC3000 camera head, the AK-HRP1000 remote operation panel and the latest configuration of the Wave Central’s AXPTT Axis RF system.  The configuration would also be compatible with Panasonic’s AK-HC5000 camera and the AK-HRP1005 or AK-HRP200 remote panels. 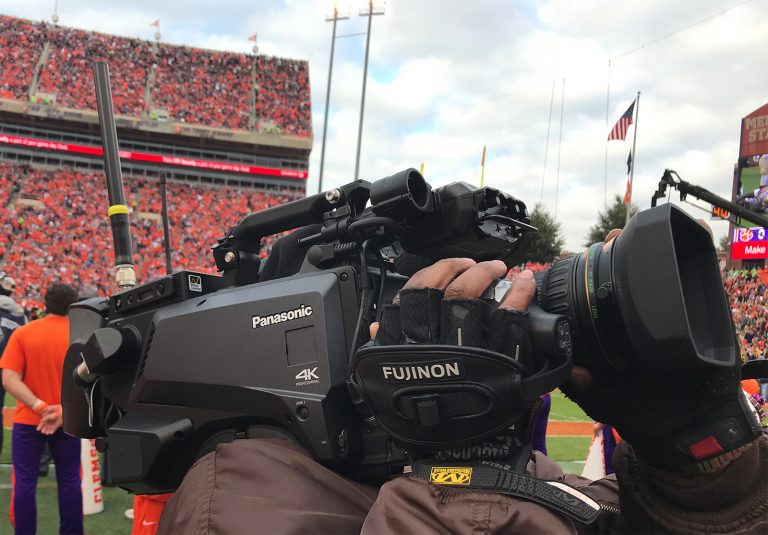 An ongoing collaboration between Wave Central and Panasonic has modified the Wave Central control communication to accommodate the Panasonic protocols and devised an innovative attachment methodology greatly simplifying integration while maintaining the capability to alternatively attach the traditional Lemo connector for SMPTE 311 operation when wireless is not required. The latest transmitter’s reduced footprint and the robust mounting mechanism on the Panasonic (typically used for the studio viewfinder) enable an elegant Wave Central design that is robust and well balanced.

“We were all excited when we saw the first prototype” said Michael Bergeron, Senior Product M, Camera Systems, Panasonic. “Wave Central is the industry leader for stadium wireless and Panasonic has a reputation for well-balanced cameras on the shoulder, which we don’t want to compromise to provide wireless. Building on the recent success of the HC5000 camera in Division 1 stadiums, this is another step to leap frog Panasonic into the live sports market.”

According to Wave Central’s Executive Vice President Anthony Sangiovanni, Wave Central had plans to show an existing wireless system to Clemson at a regular season game and Clemson had already deployed its first AK-HC5000 cameras, so when the time came to test the new prototype in the field, Memorial Field was a natural choice of venue. A camcorder-based system and AK-PX5000 camcorder were on hand for back-up. but these never left the case as the prototype worked flawlessly, providing shots outside the arena, including outside pre-game fan shots and an iconic view of the team’s exit from the buses and run into the stadium.

The prototype utilized the 4K-capable UC3000, but as the team utilizes the 4X high speed capable HC5000, the camera systems were all set to HD. These cameras were 100% compatible, although the prototype did not require the AK-UCU500 camera control unit as it was battery powered and interfaced directly to the remote panel via Wave Central’s remote camera control system. Once the connection was established the UC3000 was quickly configured to match the cameras on the field. 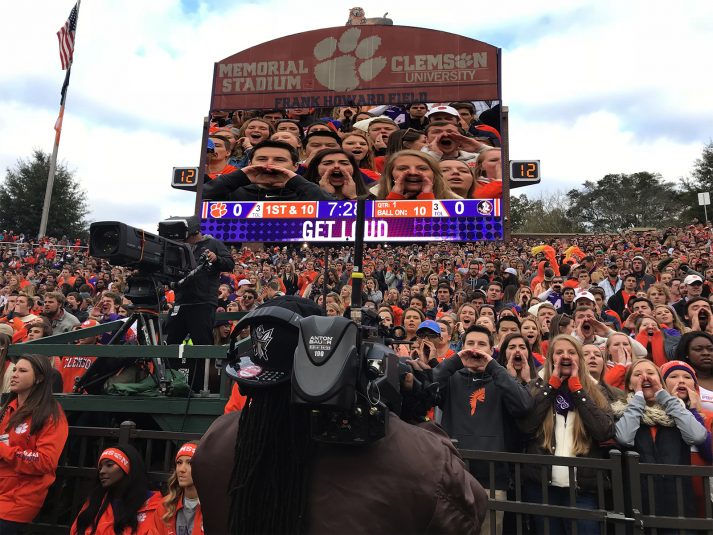 For Clemson’s game-day demonstration, Wave Central deployed their newly-developed AXPTT transmitter. integrated onto the rear area of the Panasonic UC3000 camera to provide excellent balance for the operator, while allowing the client to still have access to the camera’s fiber optic cable connector if desired.  This set-up provides the user the option of using the best possible solution for any given situation. If the client wants to use the UC3000 in its original configuration, the camera can be connected to the CCU via a SMPTE 311 cable.  If the client prefers a wireless configuration, then the camera’s CCU and cable are removed from the system and the Wave Central AXRX receiver becomes the camera’s “CCU.”  Remote paint function is still maintained by incorporating Wave Central’s AXRPS HUB unit, which utilizes the original manufacturer’s remote panel, in this case, the AK-HRP1000.  Pristine video and audio quality as well as full camera control are provided to the client without any compromises.

For the Clemson demonstration, an AXRX8 RF receiver was used.  A maximum of eight antennas could be used with the AXRX8 at any one time, but only six were used for this implementation.  The six antennas, along with the AXRX8 receiver, were mounted outside the same camera booth as the high 50-yard line HC5000 camera.  The AXRX8’s HD-SDI output as well as the camera control data were sent back to Clemson’s central control room via fiber optic cable.  The wireless camera provided not only full RF coverage within the stadium and bowl seating area, but the RF camera and operator were also placed on the bus with the team as they were driven from Avenue of Champions to the players’ East Side entrance at Howard’s Rock.  The RF cameraman then ran down onto the field with the team.  The ability to have a robust wireless camera ride outside the stadium along with the team and participate in the team’s entrance gives the spectators an intimate, unique “players’ perspective” that is impossible to do with a hard-cabled camera.