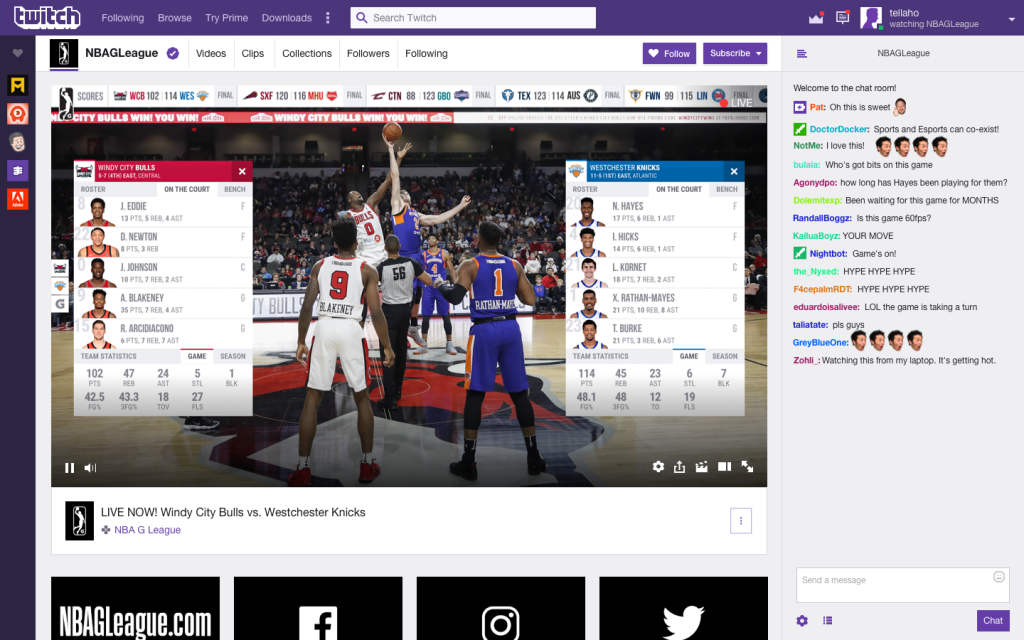 During the 2017-18 regular season, basketball fans can expect up to six NBA G League games to stream live on Twitch each week.  After each live broadcast, these games will be available on demand.

The partnership expands NBA G League game distribution and aims to ambitiously innovate the digital presentation of basketball.  In addition to the main broadcast, this partnership will feature co-streaming with select Twitch personalities and basketball fans.

Co-streaming allows a creator to share another channel’s video feed, but with their own commentary and community, resulting in a more personalized, social experience that includes the ability for viewers to chat with commentators during the game.  At launch, GoldClove and more than a dozen other top personalities on Twitch will take part in the co-streaming initiative.

Additionally, this partnership will introduce interactive functionality for Twitch viewers in the form of a channel overlay that provides easy access to a wide range of stats and the ability to accrue loyalty points.

To enhance the viewing experience, Twitch is adding interactive features with the NBA G League Extension.  This is a channel overlay created using Twitch Extensions. Twitch Extensions, which are a new set of tools that allow developers, help creators customize their channel pages with interactive experiences.  The NBA G League Extension provides the following features for Twitch viewers which will update and evolve over time:

“Our deal with Twitch will be groundbreaking,” says Malcom Turner, NBA G League President.  “By leveraging fan commentary, new technology and a passionate community, Twitch elevates video in a unique, engaging way that resonates with young viewers.  We look forward to collaborating with their team to create something truly special for basketball fans.”

“From day one, the NBA team got what Twitch is all about.  We aren’t a traditional sports experience on TV; we are much more,” says Michael Aragon, SVP of Content, Twitch.  “From our broadcasters to our engaged community to our interactive product that brings everyone together, collaborating with their team is going to bring a unique experience to basketball fans worldwide.  We are thrilled to be working with the NBA G League and look forward to seeing the impact of social video on mainstream sports.”

As a research and development arm of