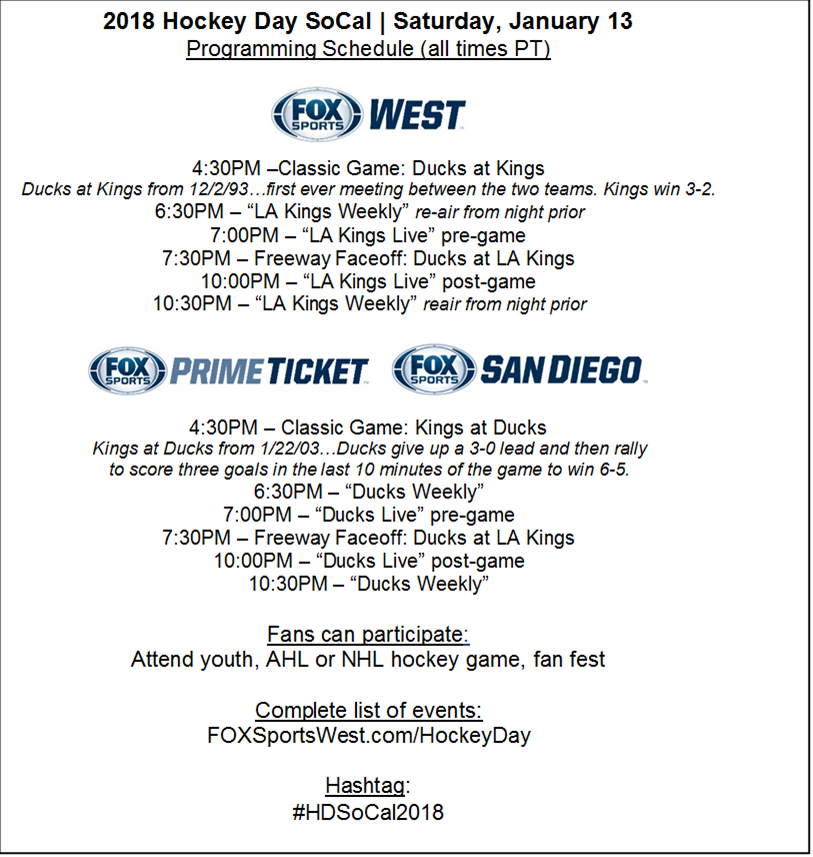 Fans are invited to attend a variety of hockey-centric events across Los Angeles, San Bernardino, Orange and San Diego counties that day, including Jr. Kings and Jr. Ducks hockey events, Ducks Fan Fest at Anaheim Ice, L.A. Kings Fan Fest at L.A. Live, the Bob Miller statue unveiling ceremony on Star Plaza and a banner unveiling inside STAPLES Center, and any one of the three professional hockey games being played across the Southland. For a complete listing of all events, visit www.foxsportswest.com/hockeyday.

Complementing the day, FOX Sports West, Prime Ticket and FOX Sports San Diego will each offer 6.5 continuous hours of hockey themed programming beginning with two Kings vs. Ducks classic games at 4:30pm and concluding with live Ducks vs. Kings Freeway Faceoff coverage. Footage and interviews will be compiled from the various events across SoCal that day and can later be seen throughout the Ducks vs Kings telecasts that evening.

“As the sport of hockey continues to grow across Southern California, the first annual “Hockey Day SoCal” is a great platform to showcase the incredible youth programs organized by our team partners, and to celebrate the Ducks vs. Kings rivalry,” said Lindsay Amstutz, Senior Vice President and General Manager, FOX Sports West, FOX Sports San Diego and Prime Ticket.”

“We look forward to joining the Kings and FOX Sports with a terrific day of hockey on Saturday,” said Anaheim Ducks COO Tim Ryan. “We take tremendous pride in our grass roots efforts to continue the growth of our sport and look forward to a great celebration with hockey fans across Southern California.”

“Southern California has proven to be an incredible hockey market for more than 50 years and ‘Hockey Day SoCal’ is an event for hockey fans of all ages,” said Kings President and Hockey Hall of Famer Luc Robitaille.  “In conjunction with FOX Sports we look forward to participating in this event — highlighted by the Kings-Ducks game at STAPLES Center which includes a great moment for Bob Miller, who, of course, helped introduce hockey to so many, thus creating new fans of our great game.”