Last night’s Opening Ceremony for the 2018 Winter Olympics officially opened a new era for the delivery of Olympic content throughout Europe as Eurosport, the pan-European sports channel, begins an ambitious production that will have the Discovery-owned channel delivering the Olympics to nearly 50 nations in 42 languages.

“We are the first to hold all the rights for Europe,” says John Honeycutt, Discovery, Chief Technology Officer. “We are talking about broadcasting in 42 languages. In itself, that makes the whole project incredibly, how shall we say, interesting! But our team is up for it.” 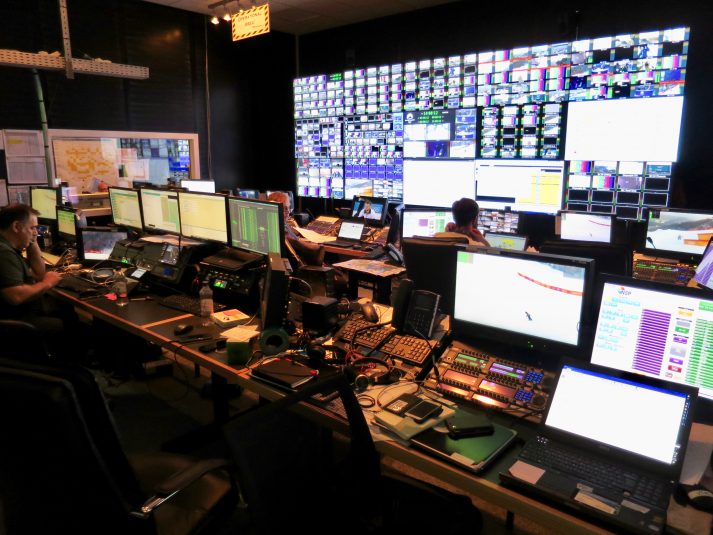 Eurosport’s Broadcast Operations Center at the IBC is the nerve center for the channel’s coverage of the Games.

The Eurosport facilities at the IBC are a beehive of activity today. There are production teams focused not only on the content that will be delivered across all of our Europe but also dedicated teams for a number of nations that will create more nation-specific content. And the efforts extend back to Europe as well, both to Eurosport’s facility in Paris and beyond. Eurosport has around 900 personnel in South Korea, while a further 1275 will be working on the Games content at various production sites around Europe.

“We are integrating across 10 production centers throughout Europe,” says Honeycutt. “When you are servicing so many sites, the scale produces an exciting level of challenge. But this is what Eurosport’s business has been about for 30 years.”

NOS in the Netherlands, Rai in Italy, ARD and ZDF in Germany, RTE in Ireland and others across much of Eastern Europe have inked deals with Eurosport. It separately struck a long-term deal with the BBC, which already had the rights to a number of Games. Discovery will air the exclusive rights in a number of major markets where it has a free-to-air presence, including in Spain via its D-Max channel, and across parts of Scandinavia.

The Eurosport team has been on site in PyeongChang for months and one of the keys was establishing a relationship with OBS, the host broadcaster for the games.

“We are absolutely thrilled with the performance and professionalism of OBS,” says Simon Farnsworth, Discovery Executive Vice President, European and Sports Technology. “They are providing an enormous number of services out here.”

In part, that success is down to the amount of work that has been carried out prior to equipment being shipped to PyeongChang. In all, seven sea freight containers moved the equipment, all of which was pre-wired prior to shipping.

“There are over 85 racks of equipment that have been installed in the IBC,” reveals Farnsworth. “All that equipment has been provided by NEP. That company has been a fantastic long-term partner for us and has the scale to help us do what we need to do.”

The sheer scale of providing broadcasts across most of Europe and Scandinavia is not without its challenges. Farnsworth adds that the audio matrix is the most complex document he has ever seen.

“You don’t need a PhD in astrophysics, you need a professorship,” he says. “The audio engineers have done an outstanding job pulling this together because it is seriously complicated.” 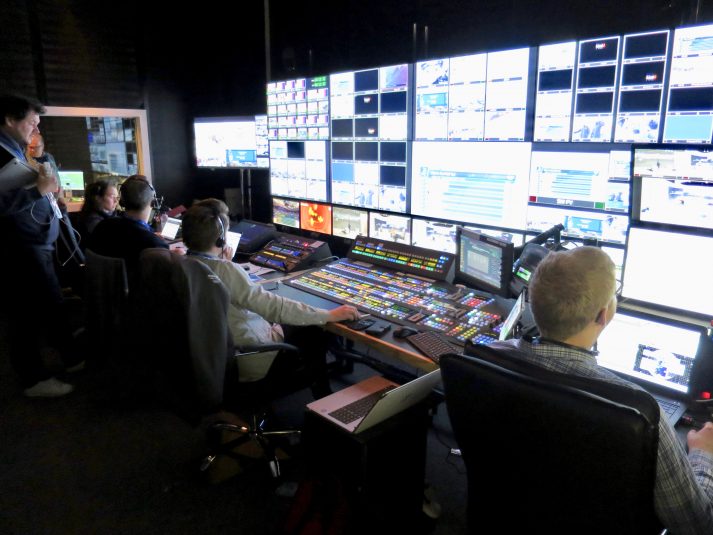 Eurosport Norway has a dedicated production-control room to tailor content for Norwegian fans.

The Eurosport presence at the IBC extends to the roof, where Eurosport Norway and Sweden have studios overlooking the mountains, and the venues where cameras in mixed-zone, announce, and commentary positions help provide more personalized coverage.

“Plus, of course, there will be studios at some of the venues,” says Farnsworth.

Venue operations will also benefit from what Eurosport calls the Radical Van, a mobile studio that can be driven from one venue to the next and give production teams a chance to get closer to the fans or interview athletes.

“It’s a unique van that has gained a great deal of attention for both social media use and traditional TV,” says Honeycutt. “It adds to our ability to tell the story a little bit differently from the way it might have been told in the past.”

Making the van a reality took some negotiating with OBS and the IOC but concerns about things like security were overcome.

“We overcame the obstacles and are really excited about the potential,” says Honeycutt.

In addition to the studio-based production, Eurosport will have 60 ENG crews collecting content from around the Games. Editing will be carried out both in South Korea and at various European facilities. Twenty edit suits will be used on location with a total of one Petabyte of storage being available.

The concept of remote production, whereby the production team is physically removed from the studio or venue, is an ongoing trend the world over and Eurosport is no exception.

“We will also be carrying out remote production, both from the IBC and right back at European sites,” reveals Farnsworth. “The overarching control system — the IP-based Virtual Studio Manager (VSM) — means anyone in any location can select any piece of video and any piece of audio and talk to any commentary position at any time. In Europe that will operate over four 10 Gigabit circuits.

Eurosport also installed a Wide Area Network (WAN) that links all of the production sites via IP multicast technology.

“When we are talking about the WAN, we are looking at the way forward for the Eurosport business,” says Honeycutt. “About two years ago, we chose to invest in interconnectivity over 10 gig links — although that is obviously expandable – to connect all of our environments. Frankly, we don’t think we can move forward without that kind of connectivity.”

With so much content being distributed across so many disparate facilities Honeycutt says it is important to minimize latency. JPEG encoding was the flavor of choice and a 50 Gbps circuit to the Eurosport MAM facility in Oslo ensures maximum transfer speeds.

“We can turn around edits and content and give it to our consumers as quickly as possible,” he adds.

Immersive Cube Route
One studio in PyeongChang that has created significant interest is known as the Cube. Equipped with one pedestal- and one jib-mounted camera, a Grass Valley production switcher, a Calrec audio console, and augmented-reality capabilities courtesy of Stype and Vizrt, the facility can be booked by any of the production teams onsite to create next-generation studio content.

“It is totally immersive and has been a really serious technology challenge,” explains Farnsworth. “LED screens are available floor to ceiling on three walls, and on the floor. All of the screens will have augmented reality driven by Stype and Vizrt technology and will allow presenters to tell stories in a completely new way.” 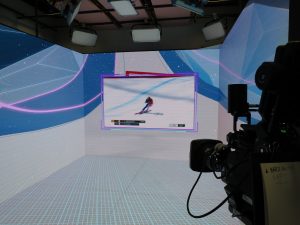 The setup will allow, for example, the action of a downhill skier to be shown on the wall. The skier could appear to emerge from the wall and the presenter walk round the image. The AR graphic can show the body position and angles, which can then be twisted or turned as the story develops.

And analysis tools, highlight by Liberovision, allows for things like heat maps of where ice hockey players are spending most of their time during a game.

“Beyond the Cube facility, all the studios will have access to all of that analysis technology,” says Farnsworth.

Data services for the Winter Olympics are provided by Deltatre’s Magma System. In another first for the PyeongChang games, the OBS data will be sent to the cloud, making it available for all Eurosport production centers throughout Europe. This includes those Discovery facilities that are providing digital content for the OTT services.

Adds Farnsworth: “Make no mistake, these Games are massive and a challenge we are more than happy to meet – but they do foreshadow the way such broadcasts will be carried out in the future.”