Sports Graphics Forum: As Next-Gen AR Becomes the Norm, Repeatability and Ease of Use Are Essential

Although augmented reality is nothing new to sports production — the 1st & Ten line celebrates its 20th anniversary this year — AR has taken a giant leap in the past three years and is dramatically changing the way stories are told, both on the field and in the studio. 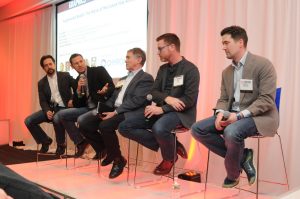 At SVG’s Sports Graphics Forum this month, a panel featuring executives from Fox Sports, Turner Sports, The Future Group, ChyronHego, SMT, and Vizrt discussed best-use cases, platforms, and workflows for AR, as well as how its use within live sports coverage is evolving. The one principle the entire panel agreed on was that AR cannot be used for technology’s sake alone: these elements must be used to further the story and provide valuable information to fans.

“Our philosophy has always been to use [AR] as a storytelling tool. We try not to use it for technology’s sake – whether that is in a live event or in the studio,” said Zac Fields, SVP, graphic technology and innovation, Fox Sports. “The interesting thing is that people can interact with [AR] on their phones and are familiar with what AR is now. That puts the onus on us to present those elements at an even higher quality now. [AR has] become the norm now, and it’s just going to continue to grow. The tools are there for people to come up with new ideas. The one thing that I would hope is that we can make it easier [to use] moving forward.”

Fields’s desire for more–user-friendly AR creation and integration was echoed throughout the panel by both users and vendors. Although a bleeding-edge AR project may be exciting and create a new experience for the fan, the goal is to create a solution that can be set up and used simply for every game.

“We’re trying to make sure that customers have ease of usability and repeatability every day,” said Isaac Hersly, director, business development, Vizrt. “It is an issue, and we are always looking for tools that are going to make it easier to set up and not need a rocket scientist. You [need to be able to] have someone that can operate the system very simply. That is our challenge, and we are always looking to come up with solutions to solve that.”

Last year, Turner Sports teamed with The Future Group to introduce augmented reality to its ELEAGUE coverage. The two companies worked with Ross Video to create life-like incarnations of videogame characters, allowing fans tuning in to watch games like Street Fighter V or Injustice2 to see these characters brought to life in the studio.

“I think creating AR characters from the games and bringing them to the audience adds an enormous amount of value for the fans and the viewing experience,” said Zach Bell, senior CG artist, Turner Studios. “If you can take characters or aspects of the game and have them as dimensional elements within that environment, it creates a much richer experience and allows fans of the game to visualize these characters in a new way. That in itself adds an enormous amount of connection to the experience for the viewer.”

Although esports presents a different case from a live game taking place on a field, Bell said, he believes similar AR elements will soon be making their way into live sports content (for example, NBC’s 3D AR elements from player scans during Super Bowl LII).

More Than Just a Game: Bringing AR to the Masses

It was only a couple years ago that high-end AR elements were reserved for the highest-profile sports events, such as NFL A games. However, with the technology’s rapid advance in recent years, AR has become ubiquitous for most national-level live sports productions and is making its way into even lower-tier properties. In addition, AR elements are becoming available on multiple cameras rather than just the main play-by-play camera (such as the SkyCam), and these systems can even be remotely controlled from offsite.

“The technology is allowing us to drive the next generation of this [content],” noted John Howell, creative strategist, SMT. “We have done the yellow [1st & Ten] line for 20 years, but, two years ago, SMT helped to create a technology that allowed us to do it on the SkyCam. Having that optical vision tracking to create the pan-tilt information off a $30,000 camera head for an image has enabled us not only to do this off the SkyCam but also to do it remotely.

“[That allows us to deploy AR] on more shows [more cheaply],” he continued, “and that technology will then trickle down to more shows. It won’t be just on Fox’s 4 p.m. Sunday NFL game or ESPN’s MNF or NBC’s SNF; now this [technology] gets to go on a lot more shows.”

What’s Next?: Getting More From Player-Tracking Chips, Customizing AR
The use of AR and the technology driving it has evolved rapidly over the past few years, raising the question, What’s next? The panel had plenty of predictions regarding the next great leap forward, but the primary point of excitement revolved around the continued advance of player-tracking RFID chips, especially the NFL’s Next-Gen Stats system.

“With the emergence of Zebra [Technologies] chips on players and [the NFL] looking at instrumenting the football [with a chip], you could see how that can tie to your first-down–line [graphic],” said Bradley Wasilition, director, sports analysis/lead sports analyst, ChyronHego. “The first-down line could actually dynamically change color, for example, when the first down is reached. Now, when that chip crosses that line, you can [definitively] say whether it is a first down or a player was out of bounds [on the sideline].

“Or think of a dynamic strike zone in baseball or a dynamic offside line in soccer,” he continued. “These are all different things that don’t necessarily reinvent the wheel, but they take baseline AR and move it into the 21st century.”

Fields predicted that, as multiplatform content and OTT outlets grow, fans will someday be able to customize their own AR elements within the sports coverage they are watching: “Eventually, it will get to a point where we can put this data in the hands of the viewer on an OTT offering. Once that happens, they can choose to turn off the strike zone over the plate. That is when we’ll really get some flexibility and customization to people so [viewers] can enhance [their experience].