SVG sat down with SES VP, Business Development, Steve Corda to discuss that expansion, how he sees the 4K/UHD market evolving, the biggest challenges remaining, the future of HDR, and how the demand for sports content is driving it all. 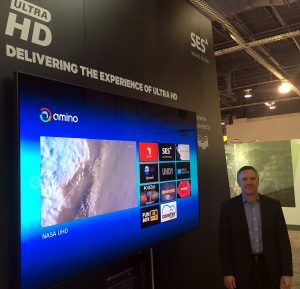 Steve Corda at the SES booth at NAB 2018

First off, we’ve had continued success with the North America Ultra HD platform. We’re at 11 channels now. We added The Country Network at the end of last year, which puts us into a fairly popular genre, and we’re getting quite a bit of take-up by cable operators. We also broadcast the Olympics in 4K for NBC, which was a huge success. We sent it out to eight to 10 cable operators throughout the U.S., and we didn’t have a single trouble call from any of them.

We’re now going to build on that by launching the Ultra HD platform in Latin America. It’s once again a true end-to-end system: we take the channels all the way from origination playout through the satellite and then into the cable-operator MVPD headend. And we [install] equipment so we can manage it all the way out.

The entire bouquet of 4K channels is available, and, based on whatever channels they’re interested in, we can activate those particular channels. Of course, in Latin America, it’s not just one single market, so we will likely have customized approaches for each of the individual markets in terms of our go-to-market proposition and how we market it. But, in general, it’s going to follow that very successful model that we’ve had in North America.

We’re launching the Latin America platform this week on SES6 with three channels, as well as Fashion One 4K, which we actually launched in 2015. The other channels [are] NASA TV UHD and our Ultra HD demo channel, which we use as an incubator for 4K-content producers. We use that as the starting point for a new operator.

Why do you believe now is the right time to launch the Ultra HD platform in Latin America?

Now is definitely the right time — just as it was in the U.S. market three years ago. But I think [Latin America] is going to be a little quicker than North America. HD is just now taking hold there, so this will be another transition, but I would say that we would expect to see pretty significant Ultra HD take-up in the next one to two years. A number of operators are already quite interested in picking up the feeds.

Do you see sports content helping to drive the market for UHD content the way it has in North America?
Yes. I think, in all the markets, sports is the driver. When we talk to the operators in North America, and it’s the same in Latin America, the first thing they say is, “We want live sports.” Simply put, that’s the compelling content. We’ve done three live events now: a Bellator MMA event last June, and we’ve done Olympics twice now with NBC on a [near-live basis] with a slight delay.

Specific to Latin America, we want to create a solid bouquet of [Ultra HD] channels building up to the World Cup. While we are not carrying the World Cup in 4K, that event represents a major opportunity to build a base and look forward to 4K sports in the future. Operators [distributing the World Cup] have come to us because they want additional 4K programming to complement that, to make it into more of a bouquet as opposed to just a single event. We’re definitely excited that we were able to get this platform in place a couple months before the World Cup starts.

One aspect that will be very different is that, in North America, we have focused on the smaller operators. We’re seeing just the opposite in Latin America. It’s the largest operators that are interested. They have had the advantage of seeing this technology evolve in North America, so they can get a jump-start, and they see it as a real differentiator.

What are the most significant challenges remaining in 4K/UHD transmission and delivery?
I see the challenges falling into three key areas: set-top–box deployment, compelling content, and consumer adoption.

Set-top–box deployment is much better than it was a year ago. In fact, there was not a single cable operator a year ago that deployed any [UHD] set-top boxes; it was all IPTV. We’re seeing a lot more adoption, largely thanks to the Arris MG2 [DCX900 cable media gateway] set-top box, which lot of the operators are using.

[As for] compelling content, we have the largest bouquet of [UHD] channels available, with hundreds of hours running, but it’s primarily not the big sports and brand names from tier-one programmers. That said, some of the channels that are running on the platform get their programming from the same studios that Discovery and others do. So we’re starting to see some great feedback on that.

Adoption of [4K/UHD] TVs is pretty good right now: we’re at 20%-25% of the U.S. households, based on CTA numbers. The good news is, the cable operators are calling us saying that they’re getting calls from their subscribers asking for 4K content. But I do think that getting the compelling content is always the biggest challenge because 4K-content production is not inexpensive and has to be done well.

The industry has seen a huge uptick in HDR content over the past year. What is SES’s HDR roadmap?
HDR is big. In fact, the first question we get by a number of the operators is, “What do you have in HDR?” We launched the first commercial HDR channel a year ago with Travelxp 4K. Insight TV is now in HDR, so we have two commercial HDR channels, and they are the only commercial HDR channels in the world, as far as I know. Every one of our channels is looking at migrating over to HDR. The Country Network, which we launched in December, has been producing content in HDR, so they are looking to transition over. I don’t think there’s any question that all the [Ultra HD] channels will be HDR eventually.

In what format are you currently transmitting this HDR content? How do you see the HDR format wars playing out in the future between HLG, HDR10, PQ, and others?
Right now, we’re running everything in HLG since it’s backwards-compatible; there are still a lot of SDR TVs out there. But, as we get more involved with the technology, we see a transition occurring three to five years down the road where you’ll see more HDR10 and PQ because you have the dynamic metadata. You don’t encode and get stuck into a particular environment; you can adapt it over time with the dynamic metadata. But there are still a lot of TVs that need that backward-compatibility, so HLG is definitely the [standard] in the near-term.

What new verticals is SES currently exploring in the M&E space?
We’re continuing to work on how we can better support OTT. We’re in discussions with a lot of our programming customers to fine-tune our business models and our technology. We hope to make an announcement in the next few months [regarding] how satellite can be part of the CDN ecosystem in a very efficient way, taking advantage of the things that satellite brings to the table: scalability, reliability, and low-cost transmission for a broadcast-type environment while [fitting] within the existing framework of OTT delivery in terms of HLS, MPEG-DASH, and so on.

It’s very clear that the opportunity is there for satellite to play a very key role. Now it’s coming down to how to make sure it will fit within that existing ecosystem, so we have to make sure that it’s really transparent.