From pit row at NASCAR races to the diamond at Major League Baseball games to the court at NBA games, Conservatory of Recording Arts & Sciences students continue to have top-shelf opportunities to learn from the very best audio engineers and producers in the industry while on-site in real time. 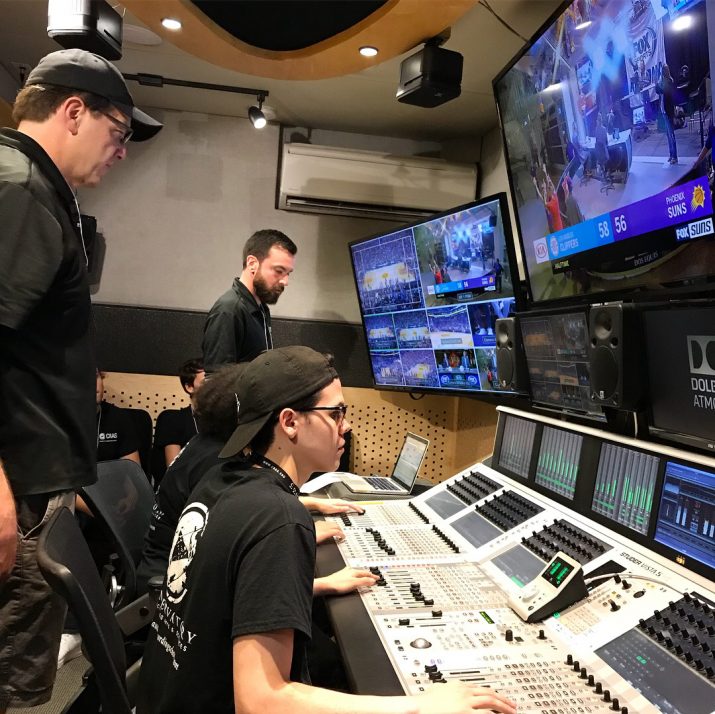 “Training during a live professional sporting event such as NBA game is the chance of a lifetime for the next crop of professional audio engineers,” says Robert Brock, CRAS Director of Education. “The complexity, speed, and accuracy required for such a live broadcast was an eye opener for them. Dan Siekmann, Phoenix Suns V.P. of Broadcasting, was our initial point of contact and also toured our mobile broadcast unit. We are very grateful for his help in allowing our students this tremendous opportunity.”

Brock explained that A2 Dennis Lamb took students out on the court to see the net, court, and announcer mic setup pre-game, and A2 DiDi Hill took them for a tour of the pre/post game set. For pre-game, game time, and post-game production, students received the raw audio and video feeds from Mobile TV Group’s HDX31 truck, including all the behind-the-scenes audio discussions and directions between the directors, broadcast crews, producers, engineers, and videographers.

“MTVG EIC (Engineer In Charge) Karl Braunwarth’s setup gave us nine camera feeds,” Brock says. “Bob Pachman was the A1 who set up our audio feeds giving us about 60 channels of audio on a MADI line. This provided students the opportunity to simulate mixing their own version of the show without the pressure of being live. Bob had all of the students rotate into the Fox audio control room to watch as he mixed the live show.”

“With all the background streaming in simultaneously, our students had the opportunity to experience what a broadcast is really like and to practice mixing the audio and follow directions amidst the chaos of a live broadcast,” Kirt Hamm, CRAS administrator, says. “This opportunity was devised in an effort to boost potential careers in broadcast audio in a real-world setting.”

“(I learned a lot) taking a look ‘behind the curtain’ and seeing what needs to be set up in order for the show to go on air successfully,” CRAS student Gabby Thomas says. I will always appreciate the opportunity.”

CRAS student Franklin Varela continued the appreciation for all involved.

“For all the ladies and gentlemen who in one way or another helped us make our broadcasting practice become a dream come true, thank you,” Varela says. “Everyone’s advice as a mentor in the