Content protection, he said, can be expensive when a DRM system is put to use, making token-based protection the poor man’s approach. Tokens are a way for an OTT service to allow a user to access video segments, and hardened tokens, which include attributes unique to the specific streaming session, provide an additional level of protection. For example, including a subscriber ID makes it easy to find users who are illegally sharing their stream. 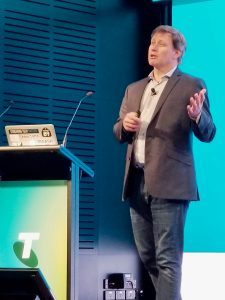 Akamai Technologies’ Will Law advised organizations to look closely at how they approach redundancy: “Live-stream failures happen dramatically, and there is no time for debugging.”

“Hardened tokens can be revocable,” Law pointed out, “and a customer-admin page can provide a worldview and allow tokens to be revoked.” Once the token is revoked, the stolen stream will end once the forward buffer ends; valid tokens will remain active.

Stream outage is another issue that impacts nearly everyone, and Law recommended that organizations take a closer look at how they approach redundancy. “Live-stream failures happen dramatically, and there is no time for debugging. Build safety and redundancy into the live stream before it starts.”

He noted that a remarkable number of streaming services do not have solid redundancy plans in place, despite the possibility of factors that can cause an outage. There are a number of failure points for a live stream, given the typical workflow of camera, cloud encoder, Akamai’s liveOrigin, CDN, and end user. The connection between the cloud encoder and liveOrigin can fail, the connection between liveOrigin and the CDN can fail, and the last mile to the end user can fail.

“The trouble is, all of these can happen at the same time in various degrees and combinations,” he explained. “So how can we protect this with redundancy?”

Solutions include splitting the encoders into both physically and network-topographically separate cloud encoders; adding a second instance of liveOrigin, which can also be connected to both cloud encoders; or a second CDN or a CDN that can guarantee multiple redundant paths through the same architecture.

“This is where it gets interesting, because both DASH and HLS [HTTP streaming technologies] have the ability to give the client two sources and then the client can begin seeking the correct source for the content,” he said. “On the encoding side, we would need to NTP-sync two physically discrete encoders so that they don’t produce content with the same name but different bitstreams, something that will cause the player to fail.”

Two physically separate ingest points, one local and one not local, also improves redundancy as will multiple ISPs. “Even if the data center is good,” he noted, “the connections between them might not be.”

On the client side, when DASH is used, a multiple-base URL layer is a simple step to take. If there is a failure with the first base URL, the DASH player will switch over to the second URL.

“These base-URL attributes can be at the upper level of the manifest, or they can be at the period-adaptation set or even the representation level,” said Law. “But most people simply put them at the top and offer alternative sources.”

A good example of that in action from Akamai is, a network can offer multiple redundant paths through the same CDN so that alternative-based URLs can be offered even though they are both from Akamai.

“We can do the same on the HLS side although it is slightly different as you offer a redundant variant stream in the master playlist,” added Law. “And a simple script that merges the output of your primary and backup encoder together to create a merged manifest.”

One consideration when using DASH, which is newer to the market than HLS players, is making sure that the DASH vendor can handle multiple base URLs.

The demand for low-latency streaming was also discussed. Historically, HLS typically uses transport-stream containers containing the audio and video along with a master manifest to create a stream; in DASH, there is a DASH manifest and ISO-based containers.

“In 2015, Apple and Microsoft got together and said we need to end this because it costs twice as much to make the TS and ISO containers that are holding the same audio and video content inside of them,” Law explained. “So they agreed to take the DASH file format, constrain it a little bit, and create CMAF, or the Common Media Application Format.”

CMAF is an audio and video segment that can be referenced by both HLS and DASH at the same time. And, said Law, it has another useful feature beyond portability: low-latency chunking or chunked encoding. Chunked encoding makes the content look like a transport stream flowing over the network, but it is still physically separate ISO segments.

“The advantage is, it can reduce latency and is backwards-compatible with players that know nothing about chunk encoding,” he noted. “Depending on the player logic, you can get anywhere from seven seconds, if you go with Apple’s starting default algorithm, down to 500 milliseconds just based on player logic. So make sure you understand how your player is starting to play a live stream.”

Law’s last topic of discussion was the AV1 codec. It garnered a lot of buzz and talk at NAB 2018, and he thinks it is going to be disruptive in 2019, when leading chip manufacturers like AMD, ARM, Broadcomm, Intel, and Nvidia bring AV1 to chips destined for cellphones, tablets, and laptops. Apple also recently came on board in support of AV1, joining Microsoft, Samsung, and others.

“AV1 is looking to be a dominant format as it outperforms [Google’s] VP9 and HEVC,” he said. “I think it will grow to become the de facto replacement for AVC and its usage will exceed HEVC over time.”

The competition with HEVC will also make a difference for those who stick with HEVC, causing the licensing costs of using HEVC to drop to more-reasonable levels.

“AV1 is already in browsers, and, by the end of the year, it will be in Edge, Safari, Mozilla-based, and Chrome browsers,” Law predicted. “And Netflix, YouTube, and Facebook are leading the way before the first chips start to arrive in 2019. For a number of reasons, it will be very attractive to those who use an HTML5-based player.”