The team looks ahead to Year 2 of enhanced fan experience, streamlined content creation

Just before taking the ice for the 2017-18 season — which they capped with their first playoff appearance since 2012 — the New Jersey Devils surprised fans by unveiling the largest centerhung videoboard in the world.

Clocking in at well over 88,000 lb. and stretching nearly four stories tall, the new videoboard gives the Devils plenty of real estate to entertain fans on game days at Prudential Center. 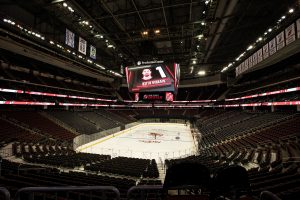 The New Jersey Devils saw an uptick in fan engagement in the first year of the new centerhung videoboard at Prudential Center.

Prior to installing the new videoboard, the team had looked to videoboard trends across the league and decided that the existing board no longer measured up. A change needed to be made.

“We asked ourselves, ‘Are we really giving our fans a first-class experience with the current centerhung?'” Broder says. “With the technological advances that have happened in the industry, we recognized that there was room to evolve and advance our capabilities.”

A Videoboard Fit for The Rock

“We looked for a way to make all four of these sides equal to really enhance the fan experience,” explains Broder. “Additionally, the new board helped to streamline the content-creation side. Before, we would have needed to take extra steps in our design process; now we can easily transfer what we want to all screens with a push of a button.”

In total, the centerhung structure contains 20 individual displays, including four HD displays in the inside of the structure for fans seated in the first few rows. The Devils also added LED ribbon boards and new digital signage throughout Prudential Center.

Inside the Control Room

Although the centerhung videoboard was unveiled just prior to the 2017-18 season, upgrades to Prudential Center’s video-control room have been ongoing for several years. In 2014, the Devils upped their graphics capabilities with Ross Video XPression and added pregame projection from Quince Imaging; the following season, the team added EVS XT3 servers for replay. 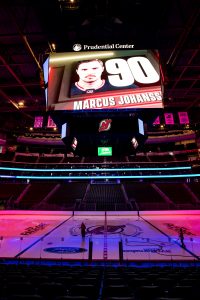 During this past offseason, as the centerhung videoboard was being installed, the team added an EVS DYVI switcher. Built on IP technology, the switcher enables the team to create content for numerous displays and customize their show using graphics tools from Ross Video and ChyronHego. Furthermore, says Broder, the flexibility of the switcher will allow the team to continue to make control-room improvements in the future.

A Fan-First Commitment to Game Day
With one year in the books for the new centerhung videoboard (the Devils’ playoff run ended in late April), Broder notes that there was a definite uptick in fan energy and engagement during home games. He’s already anticipating how his team can improve upon that first year and truly tap into what the board — and new control-room gear — can do.

“This year,” he says, “it was great: the visuals were improved, they were a lot larger, you could see them a lot clearer, and you could see some of the functionality between the transitions. Now we’ll be able to [run all the displays] in sync and show how they all really can play and deliver a show in unison. That’s going to be the next level of engagement and way to excite our fans when they’re here in the building.”

To build their show, the Devils rely on eight camera feeds — five network, two wireless fan cams, and one locked-off fan cam on the camera deck — and plan to continue creating an in-game experience that is fan-first, is both fun and surprising, is clever and culturally relevant, and empowers everyone in attendance to actively participate.

“We only got to dip a toe into the ocean of capabilities [last season] ,” says Broder. “Now, with this offseason, we’re going to be able to plunge in head first and really elevate our in-game entertainment. It’s very exciting for us and the entire organization.”