To celebrate the 30th anniversary of the coverage of the French Open by France Télévisions, the French public broadcaster is providing free access to a 100% UHD event channel broadcast 24 hours a day on DTT and satellite TV. 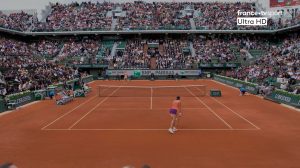 Ultra HD of the French Open

France Télévisions and the French Tennis Federation, in collaboration with TDF and FRANSAT, a subsidiary of Eutelsat, will have 4K coverage of the Philippe-Chatrier court, Roland-Garros’ primary venue during the two-week tournament. All matches will be captured by France Télévisions’ production channel. With the extension of the event channel’s broadcasting scope in 2018, the public broadcaster is optimizing its distribution policy to reach and serve all audiences.

Broadcast live from May 27 to June 10, the matches will be aired everywhere in France on channel 444 of the FRANSAT free-to-air satellite platform, in Paris and the Île-de-France region, as well as in Nantes and Toulouse on channels 81 or 82, and to all homes equipped with a 4K/UHD compatible TV set.

For the 2018 edition, Ateme has been selected to provide digital compression for the entire offer and Zayo for fiber signal transport.