Yankee fans are experiencing every tiny detail of the team’s historically high-scoring run this season, thanks to the high-speed efforts of YES Network. This season, YES became what is believed to be the first RSN to activate high-frame-rate–replay capabilities on every main game camera it deploys for home games at Yankee Stadium. All 16 cameras covering the action on the diamond have the capability of at least 2X slo-mo and up to 8X slo-mo.

“Our philosophy has always been not to add new things just to add them; we do new things if it’s going to help the [production team] tell the story better. And this has been something that has certainly made our show a lot better,” says YES Network VP, Broadcast Operations, Mike Webb. “It’s subtle; it’s not something that knocks you over the head, but it makes a big difference. It has given our director, John Moore, and his team a lot more flexibility and a lot more opportunity to enhance their storytelling, which is really what it’s all about.”

Continuing a Tradition of High-Speed Innovation
YES Network’s ahead-of-the-curve thinking when it comes to high-frame-rate cameras dates back more than a decade, when it was among the first RSNs to use Sony HDC-3300 3X slo-mo systems early on and then became the first RSN to use an I-MOVIX ultra-slo-mo system regularly on home games. A few years later, the network added two NAC/Ikegami Hi-Motion II systems, supplied by Fletcher, to its coverage. 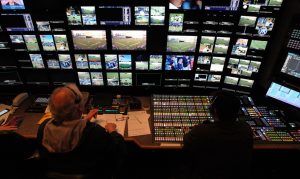 Prior to last season, YES Network worked with Game Creek Video to launch its latest mobile unit, Yogi, on which Sony HDC-4300’s were deployed for the network’s main camera positions, one operating at 8X slo-mo and two in 6X. In addition, Fletcher began supplying YES with two Grass Valley LDX 86 high-frame-rate robos. Following the conclusion of YES’s regular-season Yankees coverage, Yogi went on to serve as the home of Fox Sports’ MLB Postseason and World Series coverage.

“Last year during the Postseason,” says Webb, “I had a conversation with [Fox Sports VP, Field Operations and Engineering,] Brad Cheney, who mentioned that you can actually run these 4300’s in 2X mode without the need to purchase an additional license [from Sony]. So, prior to this season, I mentioned it to [Game Creek Video SVP] Garrett Sullivan, and [Game Creek was] completely on board right from the beginning — as they always are.”

To add 2X capability to its remaining 4300’s, YES and Game Creek bulked up Yogi’s EVS replay complement, adding an additional 12-channel EVS XT4K to the unit prior to Opening Day.

“Obviously, you start chewing up bandwidth when you go with the high frame rates, but that was really the only big issue we needed to figure out,” says Webb. “We added the 12-channel EVS, and, starting early this season, we’ve been doing all of the 4300’s in some type of high-frame-rate mode. With the exception of the booth and the roof robo [beauty shot] and things like that, everything we use in game coverage now has some type of high-frame-rate [camera].”

The Benefits of High Frame Rate

With 10 Sony HDC-4300’s and two Grass Valley LDX 86 robos — all with Canon lenses — YES now has no shortage of high-speed capability. According to Moore, having access to more high-speed–camera positions has significantly boosted his team’s ability to produce high-quality game action.

“It elevates the entire broadcast to another level,” he explains. “Each replay has unmatched clarity, whether it’s viewing a close play at any base or the pure facial emotion of a player celebrating or lamenting a play or outcome of a game. It allows the use of camera shots and angles that otherwise would have been unusable due to the lack of clarity on all game-coverage cameras, including robotics and handhelds. And, of course, the consistent replay clarity further showcases the unparalleled talents of the YES camera and tape operators.”

With more angles now capable of high-speed replays, Moore is also able to capture wider slo-mo–replay shots of both the pitcher and the batter, allowing fans to see the full trajectory of the pitch from the moment it leaves the pitcher’s hand to its crossing the plate.

“In the past,” says Webb, “John [Moore] would have had that 8X look and then that 6X look, but then the quality just wasn’t the same in that third look. But now he can take that and put it in the middle of a replay sequence, and it looks great. This technology is great, but it’s really useless if it’s not in the right hands, and we are blessed to have the best crew in the country in New York. You give the EVS and camera people these kinds of tools, and it’s fun to see what they do with it.”