With the second Triple Crown in just four years on the line, NBC Sports Group is pulling out all the stops for coverage of this weekend’s 150th Belmont Stakes. With Justify poised to capture the final gem of the Triple Crown, NBC Sports Group has boosted its production complement, adding a second onsite studio set, live pointer graphics to identify Justify on the track, and five additional cameras, including the Bat Cam aerial system that drew rave reviews at both the Kentucky Derby and the Preakness Stakes.

“Once Justify won Preakness, we knew what we were in for, and we started putting everything in motion right away,” says Tim Dekime, VP, operations, NBC Sports Group. “The [equipment levels] were increased a good bit, and we added all the bells and whistles. It means a lot more work and preparation, but it’s very exciting for us, and we are very well-prepared.”

All Eyes on Justify: More Cameras and Virtual Tracking Graphics
NEP’s ND1 (A, B, C, and D units) mobile unit will once again be on hand to run the show, with a total of 43 cameras deployed — up from 33 for last year’s non-Triple-Crown race. Besides the Bat Cam aerial system covering the backstretch, the camera arsenal includes a Sony HDC-4800 4K camera (outfitted with a Canon UHD 86X lens) on the finish line, five HDC-4300’s running at 6X slo-mo and five more running at 60 fps, 14 HDC-2500’s (eight hard, six handheld), five HDC-1500’s in a wireless RF configuration (provided by BSI), a bevy of robos (provided by Fletcher) and POVs, and an aerial helicopter (provided by AVS weather permitting). 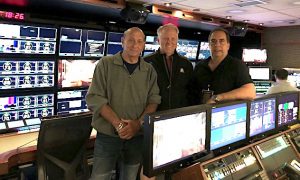 Five other cameras have been added because of the Triple Crown possibility: a POV camera at Justify’s gate and one in the PA booth with announcer Larry Collmus (which will be streamed live on the NBC Sports App), a robo to capture a 360° view of the paddock, an additional RF camera roaming the grounds, and, most notably, the Bat Cam system.

In addition to more cameras, NBC plans to use SMT’s ISO Track system to identify Justify with a virtual pointer graphic live during the race. The system will incorporate real-time data — speed, current standing, and distance from finish line — into the on-air pointer graphic, helping viewers follow Justify and other key horses throughout the day’s races.

“We’ll have a live pointer that tracks Justify during the race that our director [Drew Esocoff] will insert, if needed, [so] the horse will be tracked for the viewers watching at home,” says Coordinating Producer Rob Hyland. “It will have a little arrow pointing to where he is at certain points in the race.”

Bat Cam Covers the Back Stretch

The Bat Cam was a hit at both Churchill Downs and Pimlico, providing a never-before-seen view of the backstretch and also coming in handy when rain and fog complicated matters for NBC at both the Derby and the Preakness. The two-point cable-cam system can travel 80 mph along the backstretch, running 15-18 ft. above the ground.

“NBC had already used the Bat Cam on NASCAR, so we knew what to expect at the Derby, and it was just a matter of figuring out how to implement it into our show,” says Keith Kice, senior technical manager, NBC Sports. “It’s turned out to be a great [tool for us], especially at [the Preakness]. Even if it wasn’t for all the fog, the infield [at Pimlico] with all the tents and stages and infrastructure makes it very difficult; you really need the Bat Cam just to cover the backstretch because you can’t see it otherwise.”

Although NBC and the Bat Cam team were forced to bring in larger cranes at Belmont in order to install the longer system, says NEP Technical Director John Roché, setup and operation of the Bat Cam has improved significantly since the Derby.

“It’s no longer a science experiment like it was before,” he says. “We’re able to get [Bat Cam owner/operator] Kevin Chase all the gear that they need, and they are able to give us what we need pretty easily in terms of terminal gear, intercoms, and everything. It’s pretty much plug-and-play now.”

Hyland adds that the Bat Cam “will not only cover the backstretch of the race but will also provide dramatic reset shots of this vast facility. When the Triple Crown is on the line at Belmont, the energy in this venue is electric, and we want to capture the sense of place.”

Triple Crown Chance Warrants Double the Sets
Besides additional cameras because of the Triple Crown potential, NBC Sports has also added a second studio set. Host Mike Tirico and analysts Randy Moss and Jerry Bailey will man the 18- x 18-ft. set at the finish line, and a secondary 24- x 24-ft. stage located near Turn 2 will feature host Bob Costas and other on-air talent.

“If it was not going to be a Triple Crown, we would likely be down to just the finish-line set,” says Dekime, “but, now that it is, we’ve put the Turn 2 set back into operation.”

SMT’s Betting and Social Media GOTO videoboard will also be situated at the main set for handicapper Eddie Olczyk, who will use the interactive touchscreen for real-time odds and bet payouts for all races throughout the day. The touchscreen technology and betting touchscreen will enable him to explain and educate the viewers on how he handicaps specific races.

In addition to the onsite sets, NBC plans to incorporate several live remote feeds into the telecast, including from Churchill Downs.

“We brought out all of the tools to showcase the Triple Crown attempt, including a number of remotes that will carry live shots from Churchill Downs, where it all began five weeks ago,” says Hyland. “There will be hundreds of people gathered watching the race. We may have a live remote shot from a Yankees-Mets game just a few miles away. We’re working on a couple other fun ones as well, just to showcase this day and this athletic achievement, should it happen.”

Looking Back at a Wet and Wild Triple Crown Campaign
Although the horse-racing gods have granted NBC the potential for a Triple Crown this weekend — and the big ratings that go along with it — the weather gods have not been so kind. After the wettest Kentucky Derby on record and the foggiest Preakness Stakes in recent memory, a chance of rain remains in the forecast for Saturday. However, Roché notes that the proliferation of fiber and the elimination of most copper cabling onsite has significantly reduced weather-related issues.

“Despite torrential downpours on the first two races, we’ve been really fortunate,” says Roché. “And no matter what happens here [in terms of rain], we’re getting a little spoiled having two Triple Crowns in [four] years after a 37-year drought. For us to be able to have an opportunity to show the public how we cover racing, especially with the addition of Bat Cam, in a Triple Crown situation is really an honor.”

Kice seconds that notion: “Having a Triple Crown [in play] makes all the hard work and troubles we went through with the weather and logistics on the first two races even more worthwhile.”

Kristian Hernandez contributed to this article.