ESPN has further bolstered the college sports offerings on ESPN+ with a new, multi-year agreement with Conference USA. The digital deal will deliver more than 175 C-USA games to fans each year, including more than 125 combined football, men’s and women’s basketball games, with more than 100 of the total games on ESPN+ and the remaining games on ESPN3. In addition, ESPN’s digital platforms become the primary home of multiple C-USA Conference Championships, while also adding exclusive early round men’s and women’s basketball championship action. 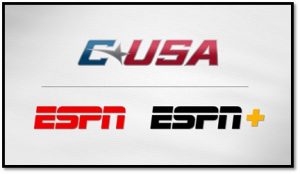 “As we look forward to the 2018-19 season and beyond, ESPN+ will offer the most expansive college sports lineup in the industry, right alongside professional leagues such as MLB, NHL, MLS, and premier events from Grand Slam tennis, Top Rank boxing, UFC, the PGA Tour and more.” says Burke Magnus, ESPN executive vice president of programming and scheduling. “We are thrilled to grow our relationship with Conference USA and have its 14 member institutions as part of the impressive digital lineup which now features more games from the conference than any other network, including a significant number of post season games.”

Conference USA Commissioner Judy MacLeod says, “ESPN has continually positioned itself on the forefront of digital distribution and emerging platforms, which makes them an ideal fit for us. We look forward to sharing the C-USA brand with their extensive audience for many more years.”

This season, 45 Conference USA football games will be available on ESPN’s digital platforms, with 32 streaming on ESPN+. Among the games carried on the subscription service are the home openers of UAB, Charlotte, Marshall, Middle Tennessee, Rice, Southern Miss, Western Kentucky, and Louisiana Tech and eight conference games in the season’s final three weeks. The addition of C-USA games adds to the more than 100 exclusive games available on ESPN+ this season.

Conference USA men’s and women’s basketball will expand their presence on ESPN’s digital platforms under the new deal, with more than 85 regular season games available each season and exclusive coverage of both conference championship’s first rounds.

Together, ESPN+ and ESPN3 will now be the primary home of multiple C-USA Conference Championships, with more than 40 post season games each year across a variety of sports, including:

ESPN’s digital platforms will also spotlight additional Conference USA Championships throughout the year with special highlight shows. Among the sports expected to be featured include cross country, indoor and outdoor track and field, swimming and diving, golf, and tennis.