The goal is a fresh angle on a studio show

ESPN’s South Street Seaport Studio has been operating a little more than two months, and efforts there continue to expand. The latest? The launch of High Noon, a studio show hosted by Bomani Jones and Pablo Torres that has a bit of a different look thanks to the decision to shoot it at 24 frames per second in letterbox with eight cameras set up in an arc to capture different angles. Toss in split screens (and even quad splits), and viewers are getting a fresh take on the typical studio show.

Mike Foss, supervising director, ESPN External Studio Group, says the concept was the capture the unique relationship between Jones and Torres and to provide more looks so that viewers become more-active listeners.

“In the traditional talk show, someone talks, and then the other person talks with them,” he explains, “but you don’t have to spend much time with Bomani and Pablo to see how passionate and animated they are. More cameras give us more options, but we also didn’t want to betray the integrity of the conversation. Viewers can watch the person making the point and also look at hand movements or watch the person who is listening.” 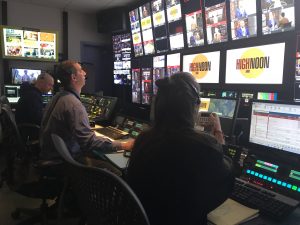 The use of eight cameras, including five Sony F7 units, is a nod to a more cinematic approach, where decreased depth of field places the emphasis on the conversation and relationship between Jones and Torres. Ferri Lighting Design & Associates (FLDA) provided additional foot-candles of lighting to help pull the guests to the forefront of the image.

“If you look at the cross shots, they are clean but also drop off due to the decreased depth of field,” Foss points out. “Framing in letterbox, the saturation of the images, and the warmth of some of the scenes help us hit multiple goals to make the show feel special and different.”

High Noon Supervising Director Howie Lutt and the rest of the core front-bench team produce the show from an ESPN control room in Washington, DC. One of their goals is to always show the viewer that there is a lot of active listening on the set.

“We’re showing that they are not disengaged,” Lutt says of Torres and Jones. “When we were building out the show, we saw 70 possible boxed combos [for the split screens], and we have already used 47 of them. Normally, we have three or four cameras on screen to increase the ability of viewers to see different perspectives.”

Good communication is the most important part of cutting the show from a remote location, and, according to Lutt,