2018 FIFA World Cup: Tourney Kicks Off with New Workflows, VAR at the Forefront

HBS team at each match will create UHD, UHD HDR, HD feed out of a single production

It’s the first day of the 2018 World Cup in Russia, and the International Broadcast Centre in Moscow is all systems go and fully functional for both the host broadcast and the 78 media-rights holders that will call it home for the next month.

“The last touches at the 12 stadiums have been done, and we are all good to go,” says Florin Mitu, head of broadcast services, FIFA. “Our warm-up match successfully tested the technical platform, including the UHD/HDR and multiformat single production processes at the venues.”

For Mitu the appreciation for the work done to date is clear.

“After four years of meticulous planning, we cannot wait for tonight’s kick-off,” says Mitu. “Host nation Russia is facing Saudi Arabia at the Luzhniki stadium in Moscow. Everyone involved has put in a great effort and enormous passion. Thanks to all for working so hard on the organization of the production as coverage of the 2018 FIFA World Cup is now ready to reach every screen on Earth.”

Once again, many of the rightsholders’ production efforts will focus on not only the live matches but also the content available in the IBC and stored on the FIFA Max Server. The server will handle content ranging from highlights to profiles of Russian cities, interviews with athletes and coaches, team arrivals, press conferences, and much more.

“We have a new user-friendly interface for the FIFA Max Server that has been introduced to the [media-rights licensees], and they have been highly positive in their response to the functionality,” says Mitu. “And the centralized infotainment– and clips-compilation–production system has also successfully been tested.” 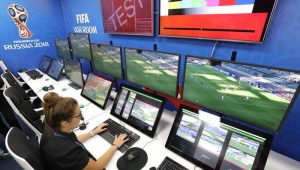 The VAR system will bring a new level of accuracy to referee calls at the World Cup.

The seven studios at the IBC will be complemented by 11 studios located at the most iconic site in all of Russia: Red Square. Eleven rightsholders have presentation studios there: SBS Australia, Globo and GloboSat from Brazil, TV Azteca from Mexico, DirecTV Latin America, the BBC and ITV from the UK, Telemundo from the U.S., beIN from the Middle East, Fox U.S., and CCTV.

One of the issues from the early days was how to get everything up and running when the Moscow Victory Day Parade took place on May 9. But the team managed to get it done.

“[The presentation studios] were built in record time,” says Mitu.

The production team in Moscow at the IBC is c