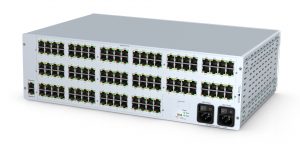 KVM has updated versions of the ControlCenter-Compact Series.

Up to now, the ControlCenter-Compact was available in six expansion levels providing between 8 and 80 dynamic ports, which can be used either as input or as output. The systems are available in CAT, fiber, and mixed versions. Six new versions with 176 CAT ports, 128 CAT ports, 32 fiber ports, and mixed versions with 32 fiber ports and optionally 16/32/48/80 CAT ports have been added to G&D’s portfolio. With this expansion, the German manufacturers will now always be able to offer their customers a suitable and tailor-made solution according to the project requirements. All systems come with the in-house HDIP compression technology in the latest development stage, Level 3, which enables a lossless transmission of video signals with a resolution of 4K at 60 Hz. Thus, the new versions of the ControlCenter-Compact can be combined with DP1.2-Vision KVM extenders to extend and switch 4K video signals through the matrix.

The new matrix versions also feature the popular operating features such as CrossDisplay-Switching, the push get function, scenario switching, the KVM Matrix-Grid as well as safety features such as the screen-freeze function, monitoring, and SNMP.
The ControlCenter-Compact series is compatible with the ControlCenter-Digital, the DVICenter and all end devices so that new systems can be added to existing infrastructures. The installations are therefore future-proof and can be retrofitted even years later.