Relationships are key in a multiplatform universe

The relationship between a regional sports network (RSN) and the teams at the core of their programming continues to strengthen in a multiplatform universe where both sides can leverage digital platforms to bring fans closer to the teams, their minor-league systems, and the players on the field. The dynamics of those relationships were the subject of a panel discussion at last week’s SVG RSN Summit in Chicago.

Brooks Boyer, SVP, sales and marketing, Chicago White Sox, said that, on the team side, the greatest marketing vehicle is the TV broadcast of games and having a transparent relationship with the RSN partner is of paramount importance in both good times and bad.

“Right now, we are not good at baseball, but we have a plan and are communicating with our fans as we try to grow the season-ticket base and help them understand where we are going,” he said. “We bring content to the people and games like our High-A ballgames in primetime, getting players who are a few years away from the big leagues exposed to fans now.” 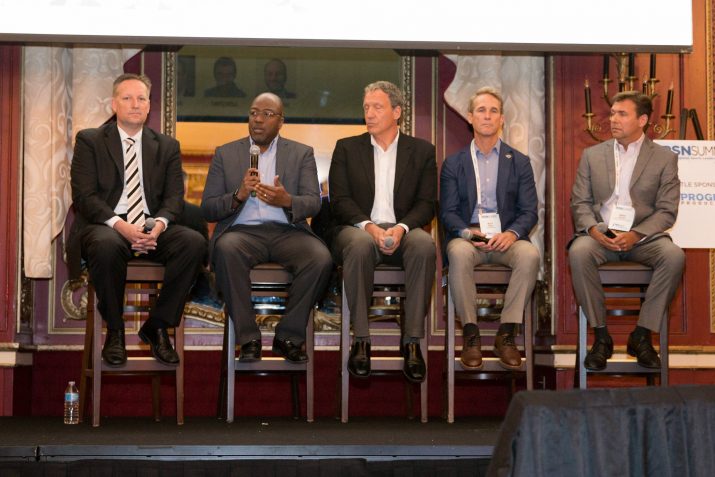 Kevin Cross, VP, content, NBC Sports Chicago, said that investing in minor-league coverage is the kind of thing that fans appreciate: it allows them to see minor-league players in action or even doing things like working out. And sports fans are always looking for more when it comes to their favorite teams.

“The team is important to them, and they want to hear good news,” he said. But that doesn’t mean that an RSN needs to be dishonest about on-the-field performance. Rather, it should avoid calling out players or coaches or attack the character of a person.

“The fans can rip the team themselves,” he added.

“The team was in the same mode as us, and we hired nine people and worked in coordination with the team, and they collaborated with us as we looked for a sideline reporter,” he explained. In that instance, a reporter was loaned from the Pittsburgh Pirates for a month and a half before the full-time reporter was able to join.

“We also decided to have twice-a-month calls with the team’s media-relations team to get on the same page,” he added. “And they were so beneficial we carried on with them through the season and postseason.”

Those calls, continued Mitchell, led to a valuable lesson: everything is rooted in the relationship with the team. “Once you are on the same page and you can communicate on a high level, anything is possible. Those every-other-week calls are critical to our success.”

The network and the team also partnered and shared in the expenses and revenues and are working together to provide a new level of access to the players.

“We get six or seven exclusive one-on-one interviews after every game and then feed those back; the viewer wouldn’t be able to tell it wasn’t live,” Mitchell explained. “It gets pretty good tune-in, especially after the big wins, and we are thankful to have that kind of access to the players.”

AT&T Sports Rocky Mountain also is home to the Utah Jazz, and Mitchell said the Jazz produces all its own shows in-house. There are now monthly calls with the Jazz production team.

The panelists also offered some tips for making the most of the team/network relationship. From the network side, divide your folks up so they can focus on a team rather than being spread over multiple teams. Also get close to the team’s marketing and communications department so that the network can best understand team needs and goals.

“There is no substitute for time and experience with each other,” said Minnesota Wild President Matt Majka. “It’s valuable at all levels and leads to a lot of continuity.”

Added Mitchell, “Invest as much time and energy into strengthening the relationship all parties present and visible.”

Mike Dimond, SVP/GM, Fox Sports North and Fox Sports Wisconsin, said his communications team has weekly calls with the communication team at the Minnesota Wild and the marketing and production teams have calls on match day to see what is going on for the telecast.

“They go through the specifics for the telecast so that they aren’t missing anything important,” he added. “Communication is the key.”

Majka cited Hockey Day Minnesota, launched in 2007, as a perfect example of putting communication into action.

“I remember very well a hot day in August when we had one-page concept for a full day of programming about the state of hockey once a year,” he said. “Mike’s response was brilliant, and Fox Sports North jumped on it with enthusiasm. It is a spectacular event and a holiday in Minnesota.”

Dimond added that Hockey Day bring communities together as they pitch the network on why their community would be a good host: “To the Wild’s credit, it is not all self-serving as they give back to the local community.”