The new ESPN-owned ACC Network is set to officially launch in 2019, but the University of Louisville is ready to create conference-leading content right now. The addition of 10 new Ikegami HDK-99 3G Full Digital 3-CMOS HDTV Portable Cameras are central to a comprehensive upgrade of the Cardinals’ production plant. 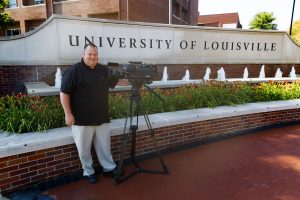 Noe is relying on these cameras to withstand the unpredictable, Kentucky weather.

“With the impending launch of the ACC Network, we knew we’d have one opportunity to build our dream package,” says Jeremy Noe, Director of Television Production, University of Louisville Athletics. “Camera selection was of paramount importance to us. The imagery from the Ikegami HDK-99 is so clean and pure: It has a wide dynamic range that produces extreme clarity onscreen, and the colors really pop.”

The HDK-99 is the successor to Ikegami’s very popular HDK-95C, and the elite offering from the company’s expansive Unicam HD line. It employs three 2.6 Megapixel high-performance CMOS image sensors for superb picture quality capable of capturing full HD 1920 x 1080 resolution. Along with a wide dynamic range of more than 600%, the HDK-99 captures superb HDTV video with its horizontal resolution of 1000TVL, SNR of 62dB, or more, and high sensitivity of F11 (59.94Hz).

A primary consideration for the University of Louisville is Ikegami’s next Generation High Speed Digital Video Processor incorporated in the HDK-99. Ikegami’s AXII was developed for the range of next-generation HD, 4K, and 8K cameras, with the ability to perform high speed processing of super high-resolution video signals in multiple formats and frame rates.

“The Ikegami HDK-99’s 4K capabilities were what we were looking for,” Noe says. “Now we have a clear expansion path to 4K, which will keep these cameras current for the next many years. When you see the 4K imagery of the HDK-99 it’s amazing — it looks better on the monitor than in real life! We also take full advantage of the super slo-motion picture.”

With dozens of sports to cover across 13 different venues at the University of Louisville, the ruggedness of Ikegami’s Unicam line was also a key consideration. “These cameras will take a beating,” confirms Noe. “We’re looking at 170 events over a 10-month period, and in Kentucky we get it all: snow, sun, and even hurricanes. I fully expect these cameras to perform at their highest level for 10 years.”

Ikegami’s responsive regional support mattered to Noe and his team. “The show is going to happen, no matter what, so service is of the utmost importance,” he says. “I’m not calling an 800 number — with Ikegami I can pick up the phone and contact my sales representative directly. I know I’ll have whatever I need within hours.”

Equipped with their new Ikegami HDK-99 3G 3-CMOS cameras, the University of Louisville is ready to meet the increased appetites of their fanbase. “Everything is at your fingertips with streaming, but people expect all content to look as good as a network broadcast,” says Noe. “When the imagery you acquire is better going in, it’s going to look better going out. Our Ikegami cameras are key to keeping our viewers watching.”