As sports-content creators look to virtualize parts of their ecosystem to increase flexibility and scalability, they must weigh the opportunities of relying on SaaS models and cloud infrastructures with the potential risks. Technology leaders addressed both sides of the scale at SVG’s recent Sports Content Management and Storage Forum in New York City.

Emily Hopson-Hill, VP, services, Ooyala, kicked off the discussion with a look at the opportunities that virtualization can offer.

“The main thing that excites our customers with the cloud is the ability to decouple their business process — content creation, aggregation, whatever it is — from their technology choices. That just opens up the agility,” she said. “The key thing we see is, it opens up ways of working at scale that we’ve never seen before.” 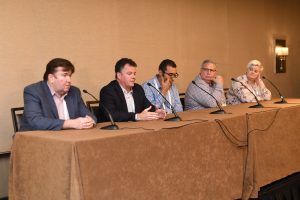 However, she continued, certain roadblocks to a fully virtualized production workflow remain. “Virtualization is becoming ubiquitous, but starting at the delivery end of the supply chain and gradually working backwards,” she explained. “The thing that’s stopping us from getting to fully virtualizing production and technology is, first of all, broadband infrastructure. The second thing is, to avoid the problem of broadband infrastructure, there are solutions where you have the remote desktop editing station in the cloud already, and then you’re limited by the quality of playback in browsers.”

Mike Flathers, CTO, Aspera (an IBM Company), discussed the added issue of latency when virtualizing all or part of the production workflow and relying on the cloud.

“[With] these workflows, especially when you start getting into the public cloud, [you see] network latency. How do you address network latency?” he asked. “If you want to do cloud-based live linear playout, file is great, but, right now today with live [playout] running from the cloud, really addressing some of the underlying network [latency issues] — how fast electrons move and connectivity around the world — is needed.”

Hector Diaz, customer engineer, Google Cloud, discussed certain applications that add to network latency. But, he said, the key will be giving the production and technical personnel the keys to navigate virtualized workflows in the cloud.

“We have certain technologies that facilitate the process, but still, those applications are a roadblock,” he noted. “Really, legacy applications in general —any application that requires an [assistant] that is no longer supported or maybe the application itself is just legacy — there’s no cloud equivalent for that application. So that’s kind of the technological roadblocks. But more than anything, it’s just skill sets. Skills sets are needed to run that workload or move that system from on prem onto the cloud.”

“[If] we have all of our games — that is our [intellectual property] — just sitting in the cloud and then something happens and that goes away, we don’t have that copy anymore,” he said. “[Instead,] we do multiple copies, offsite things. We have that sort of ‘belt-and-suspenders’ view of it. We don’t want to be able to just hand away all of our games. We have footage going back to 1905; we’ve got multiple copies of it digitized, and still no one wants to throw that tape out. It’s still sitting in a deep archive somewhere in an underground vault; we don’t want to get rid of this originally filmed content.”

According to Scott Bounds, industry lead, Microsoft, the decision on how to virtualize all or part of the production workflow and how to utilize cloud infrastructures lies with the client, but vendors like Microsoft,