The WWE SummerSlam is once again calling Brooklyn’s Barclays Center home and this year’s enhancements include the use of augmented reality graphics during introductions, virtual reality coverage of pregame shows, and the continued evolution of IP technologies thanks to NEP’s WWE production units which are IP based and home for the production team. 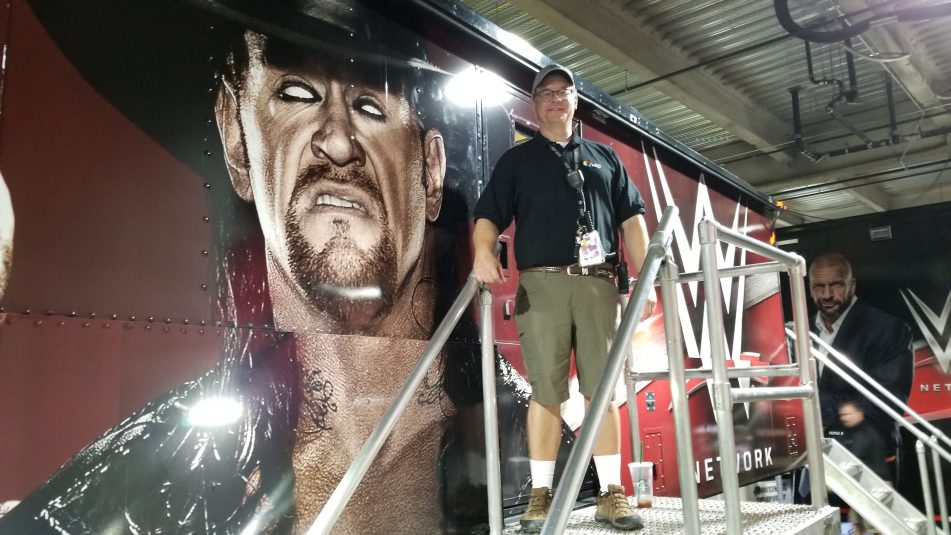 Duncan Leslie of WWE and his team have called Barclays Center home since the end of last week.

SummerSlam includes a number of events, including the NXT TakeOver, held on Aug. 18, SummerSlam, on August 19, RAW on August 20, and then Smackdown Live tonight on August 21.

“We try to be nimble and modular and use the same inventory of hardware and display elements that we use for RAW, but we just reconfigure them,” says Duncan Leslie, WWE, SVP, event technical operations.

It was SummerSlam that got the AR treatment as Brainstorm AR technology placed matchup graphics within the arena and, most excitingly, enhanced the talent entrances by replacing the actual venue ceiling with things like swirling storm clouds and roman coliseum architecture. One of the challenges is that there is limited space to incorporate the elements compared to an NFL game or soccer match where there is a large field of play that can serve as anchor for the AR element.

The WWE production team is a busy one as it produces more than 500 events per year. The turnaround for the majority of those events is usually set, shoot, and strike in a single day. IP is helping make those efforts easier although it was not without its own set of challenges.

“IP is embedded in our workflow and it has been a huge enhancement,” says Leslie. “We have a lot of information to be moved and we have the bandwidth. And with IP we can exponentially grow without having to add a lot of additional resources.”

Not only is the team focused on the TV production, but they also take over the in-house video facilities like scoreboards and ribbon boards, ensuring that every fan in every seat can follow both the live action and the programmatic action.

“We have three times the number of color correctors compared to cameras because every single video display is color corrected so they match,” says Leslie.

The show itself only requires 14 cameras (a mix of Sony HDC-4300 and HDC-2500 cameras) but the use of 35 camera drop positions allows for the show to seem much bigger.

“We are very creative with where we reposition the handheld cameras as a camera may have five drops, each with a different look,” says Leslie.

Twelve-channel EVS XT3 replay servers offer up 84 channels of support and a Grass Valley K Frame production switcher is used for the matches and pre shows. 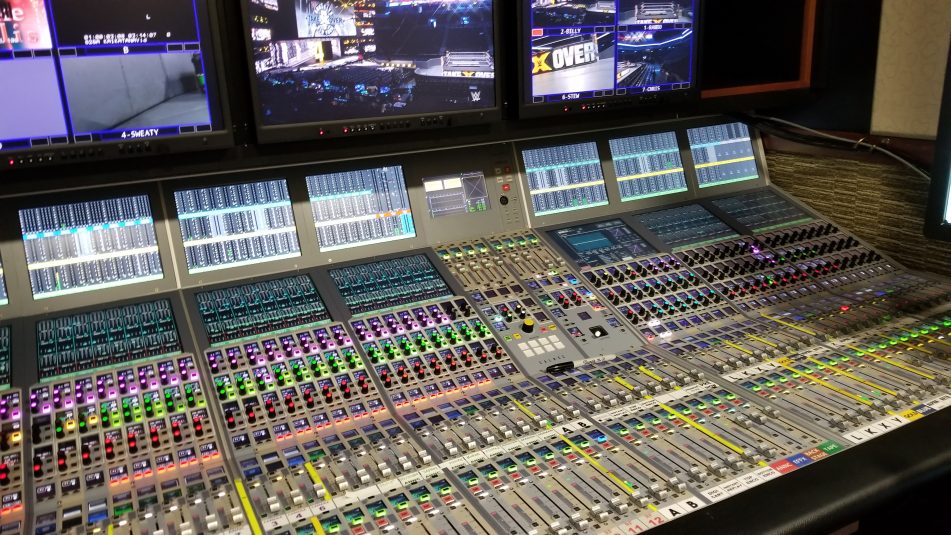 The show also requires four Calrec audio desks and the audio submix is a crucial part of the show.

“It’s a huge opportunity for us to embellish our product with thumper mics under the ring, audience mics, and handheld camera mics used a lot,” says Leslie. “Like everything else we want to surround the fans and the hotter the crowd the hotter the show and the talent feels that.”

An ENCO music library has all the entrance music and the WWE team, whether working at the live event or on a studio show, has access to the same material.

The WWE road warriors are complemented by a team at the home office in Stamford, CT. The use of Aspera for file transfers and satellite services via PSSI allow for the editing facility in Stamford to work on interstitial and graphics packages. The Switch also provided fiber for video and data from Barclays.

“Our core is still to provide superlative broadcast technology for our producers and fans but we’re also looking at ways to innovate in a cost-effective way,” says Leslie. “Creatively we are tied at the hip with Stamford and we continually upgrade the connectivity as we are very content heavy and want our fans to understand the scope of what we do.”

The Ross Xpression graphics platform, for example, has been successfully deployed to create everything from graphic promos for a tee shirt to graphics for the ribbon boards.

“We’re in the midst of growth as we have our huge domestic TV deals that start next October and that will provide a refresh and logistical challenge for us,” adds Leslie. “We have incredibly talented and energetic people and we spend the money to travel a rather large contingent every week because to source locally would mean reinventing every week. It makes more sense to keep the core team of more than 100 people together.”