Live From the US Open: USTA Production Efforts Enhanced With New Tech

The 2018 US Open tennis championships may be focused on its past as the event celebrates its 50th anniversary, but a stroll around the grounds points to the future, with a renovated Louis Armstrong Stadium giving the USTA Billie Jean King National Tennis Center (NTC) a second roofed court, which can hold 14,000 fans and host night sessions. And then there are non-cosmetic changes: fiber connectivity between the Indoor Tennis Center and the compound, for example, makes it easier than ever for the digital-content team (located at the ITC) and the broadcast-production teams to share content and work as a unified team.

Patti Fallick, senior director, broadcast operations, USTA, and a team of 150 from the USTA are focused on ensuring that the past and future mesh nicely and that all rightsholders are given the tools and access to present the event in the best light possible to fans around the world. For example, the USTA worked closely with host broadcaster ESPN to improve the quality of outer-court coverage, with Fletcher’s TRr-ACE robotic camera and SimplyLive’s ViBox systems bringing TV coverage to all 16 courts for the first time. 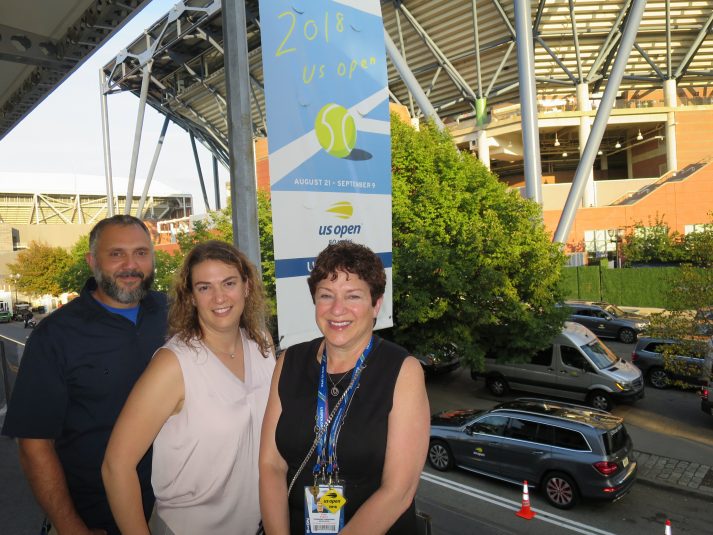 “ESPN tested out the Fletcher system for two years,” says Fallick, “and kudos to Fletcher for working with ESPN to improve the product and get it into a great place. It was flawless this year; there were almost no issues whatsoever. Our relationship with ESPN is critical to everything we do.”

Another technology finally made it to every court: Hawkeye line calling.

Last year, Hawkeye was tested on three courts and controlled remotely, says Fallick: “Everyone was comfortable with it.” This year, she adds, control of Hawkeye is done onsite for each of the four main show courts and from the broadcast building in the compound for the others.

Since ESPN took over the domestic rights and host-production duties, a ripple effect has transformed the broadcast compound, which is located on both sides of a road that runs between Arthur Ashe Stadium and the subway rail yards. A two-story temporary building right outside Ashe Stadium is home to ESPN’s core production facilities and control rooms; across the street, two other temporary buildings house the technical and office space for the international-rights holders, ESPN’s production coordination, Tennis Channel, and technical partners CenturyLink, Wazee, and the USTA production team.

The US Open broadcast compound features a number of remote-production–services vendors. Gearhouse Broadcast is on hand to support ESPN and the host-feed efforts, and NEP is on hand with NCP VIII for the ESPN ITV service, Chromium for world-feed production, and Nickel handling intercoms. Wazee and Thumbwar are overseeing archiving and digital editing. NEP Engineering Manager Nick Romano oversees the technical aspects of the USTA operations and has led the charge on efforts like connecting the ITC and the broadcast compound via fiber.

“This year, we created a full-fledged fiber network, and we have a complete international fiber plan,” he says. “We also expanded the Dante network and expanded the use of OMNEO for the communications panels.” 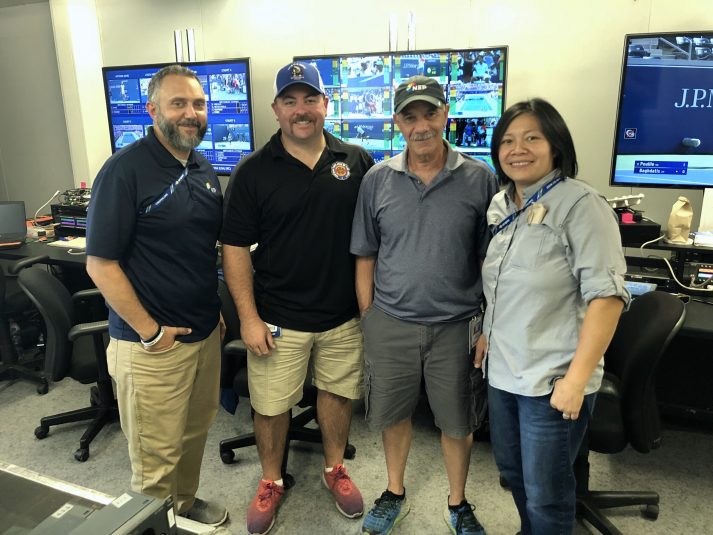 From left: Nick Romano, Brian Ready, Art Nastri, and Liz Ip are part of the crew behind the USTA’s production efforts.

Filmwerks this year took on a new role beyond power and stages, stepping in at the last minute to build the facility. Fallick says the effort more than exceeded expectations given the tight timeline. There was even time to etch the new US Open logo into the glass that lines the second-floor walkway.

“The plan is for ESPN to keep their current facilities but to break ground in October for a new permanent broadcast facility,” says Fallick. “It will be home to some of the ESPN team, Eurosport,  Wowow, Tennis Channel, USTA broadcast, and then centralized calling, automated courts, master control; CenturyLink will be put in the National Tennis Center on net with 10-gig diversity.”

The USTA’s two-story building will have plenty of air-conditioning and power, 2,500 strands of fiber, and all the equipment racks and workstations in place, making it easier for rightsholders calling the NTC home for four weeks to integrate their equipment and get down to the business of tennis coverage. Romano says his goal in the offseason is to work with the various clients and rightsholders to ensure that any hurdles are identified and overcome.

“The intent is to make this even more of a world-class event than it already is,” he says. “We want to give the rightsholders the opportunity to have the media and connectivity they need.”

The new building will be modular, providing the flexibility for interior space to change as needs and rightsholders evolve. Romano says setup efficiencies will be a big plus.

“It should be plug-and-play, and setup should be simpler,” notes Fallick. “The goal is to help the rightsholders elevate how they showcase the event and to make it easy for them to do it at the highest level possible. At the end of the day, that is what is most important to us.”

The big news this year was the opening of a revamped Louis Armstrong Stadium. Not only does it have a roof, but a new plaza area offers improved concessions and a sleek look for a venue that, for decades, seemed halfway to demolition. It also now has three international-commentary booths, which commentary teams have used to call matches on other courts (Tennis Channel also used a booth to call the qualifying-week matches).

“The new Armstrong Stadium has opened up a whole new world. It’s a beautiful stadium and has 14,000 seats although it is the same footprint as before,” says Fallick. “It gives us a great new facility, but, as with any new facility, there are some challenges, like the Camera 1 position [which had to be moved]. I give full credit to the ESPN team for working with us quickly to identify the problem and solve it with the facility team.”

The issue with Camera 1 was that it was located too high and needed to be brought down lower into the bowl. There were two options: ripping out some general-admission seats or mounting a robotic camera underneath the Hawkeye mount. The latter approach prevailed, ultimately giving the camera an ideal view of the court.

The new patio level also offers a new option for rightsholders: a standup location with the NTC plaza as a backdrop.

“ESPN and our team worked to get that set up as a standup position for live hits into Tennis and other ESPN shows,” says Fallick, adding, “It has great views of the grounds and Ashe Stadium.”

The new Armstrong Stadium’s roof gives the event even more protection from rain delays, which can cause havoc for everyone involved with the event.

With the revamped Armstrong, the Open now has two, concurrent night sessions rather than just a single one. Most important, the day session at Ashe now has only two matches instead of three, lessening the delay for the 7 p.m. evening session by long matches on Ashe.

“That used to make for a late night,” Fallick notes. “It has helped with the scheduling a lot. Also, having night sessions at Armstrong gives people a chance to stay at night and watch another great match.”

Changes at Ashe
Armstrong Stadium wasn’t the only venue to undergo construction. Ashe Stadium received some internal changes, with additional space dedicated to player needs. A new indoor warmup area and new player-only dropoff area have been created, and a garden is available to both non-rightsholders and rightsholders for player interviews.

“It’s been a positive thing,” says Fallick. “We asked for special access, so we were able with ESPN to put robocams in the new indoor warmup area, the outdoor warmup area, and inside the Wilson racket-stringing area, [as well as] new camera drops at the dropoff to cover player arrivals.”

All of those efforts are part of what Fallick says is making the event look and feel as big as it can be.

“By giving fans behind-the-scenes access, you elevate the event, and the fans can see things they never saw before,” says Fallick. “It’s a huge event, and it makes it feel even bigger.”

The enhancements extend beyond seeing the players to hearing them as well: players wore microphones during the practice week. Eric Butorac, player relations manager, USTA, and Stacy Alistair, chief executive, professional tennis, USTA, were advocates for improved access to the players.

“We got amazing content,” says Fallick of the decision to mike players during practice. “We told the players we would not go live with anything, to get the trust factor, and the material was gold: some of them would sing for the cameras or talk to them and provide good insights to their game as they were practicing. It makes the event come alive, and USTA senior management are big advocates of the behind-the-scenes access.”

The Finals Push
Heading into the final weekend, the production teams have logged a massive effort. With a full slate of qualifying matches the week before the tournament started, the number of matches covered that week exceeded the number of regular-season games played by an NBA team. And more than 100,000 fans turned out for the qualifying matches and for Fan Week.

“We were concerned with what covering practice week would do to us resource- and planning-wise and how it would impact our being ready for qualifying and the main draw,” Fallick explains. “But, in hindsight, it was great because it allowed us to work out any bugs so that, by the time we got to opening night, we were all ready for the Main Draw play.”

Next year will be another year of workflow enhancements and a new beginning with the broadcast building. One consistent element is the relationship between the USTA and ESPN as the two organizations continue to innovate and elevate the event.

“The relationship with ESPN is phenomenal,” says Fallick. “There is a lot of real mutual respect, and, at the end of the day, we get it done together for the good of the USTA, tennis fans, and US Open.”