Riot Games’ largest esports production of 2018 came to its epic finale last weekend with the League of Legends (LoL) World Championship Final in Incheon, South Korea. Always one of the most watched live esports shows each year, Riot Games outdid itself once again in terms of technology. Having been deployed o create a virtual dragon flying through Beijing National Stadium last year, AR was factored into this year’s Opening Ceremony at Incheon Munhak Stadium, allowing in-game band K/DA to be virtually inserted onstage into the opening musical performance alongside Madison Beer, Miyeon and Soyeon of (G)I-DLE, and Jaira Burns.

Of course, the Opening Ceremony’s K/DA in AR was just the first in a parade of cutting-edge technologies and production workflows deployed by Riot Games to serve the massive audience tuning into the LoL World Championship Final. Most notably, Riot Games continued to push the at-home–production envelope at this year’s Worlds, producing both the world-feed show and the English-language show from its studio in Los Angeles and reducing the number of mobile units onsite from four in 2017 to zero this year.

“We believe a reliable at-home production strategy is integral to grow globally and maintain long-term sustainability,” says Mitch Rosenthal, head of production and operations, Riot Games. “Now hosting an event in Europe or Asia or North America doesn’t force us into region-specific tradeoffs and allows all of our shows to hit the high bar our players and fans deserve.”

Over the past four-plus years, Riot has been at the forefront of at-home production and continues to leverage its Riot Direct network (the ISP used to service all LoL gameplay) to efficiently send feeds from tournament remotes to its Los Angeles production facility. Riot sources local ISPs for the last mile to connect the closest Riot Direct ingest point. During the Mid-Season Invitational (MSI) from Paris in May, the company successfully transmitted 34 live sources in 1080p60 from Paris to L.A. (with a latency of just 175 ms) over a 1-Gbps pipe. 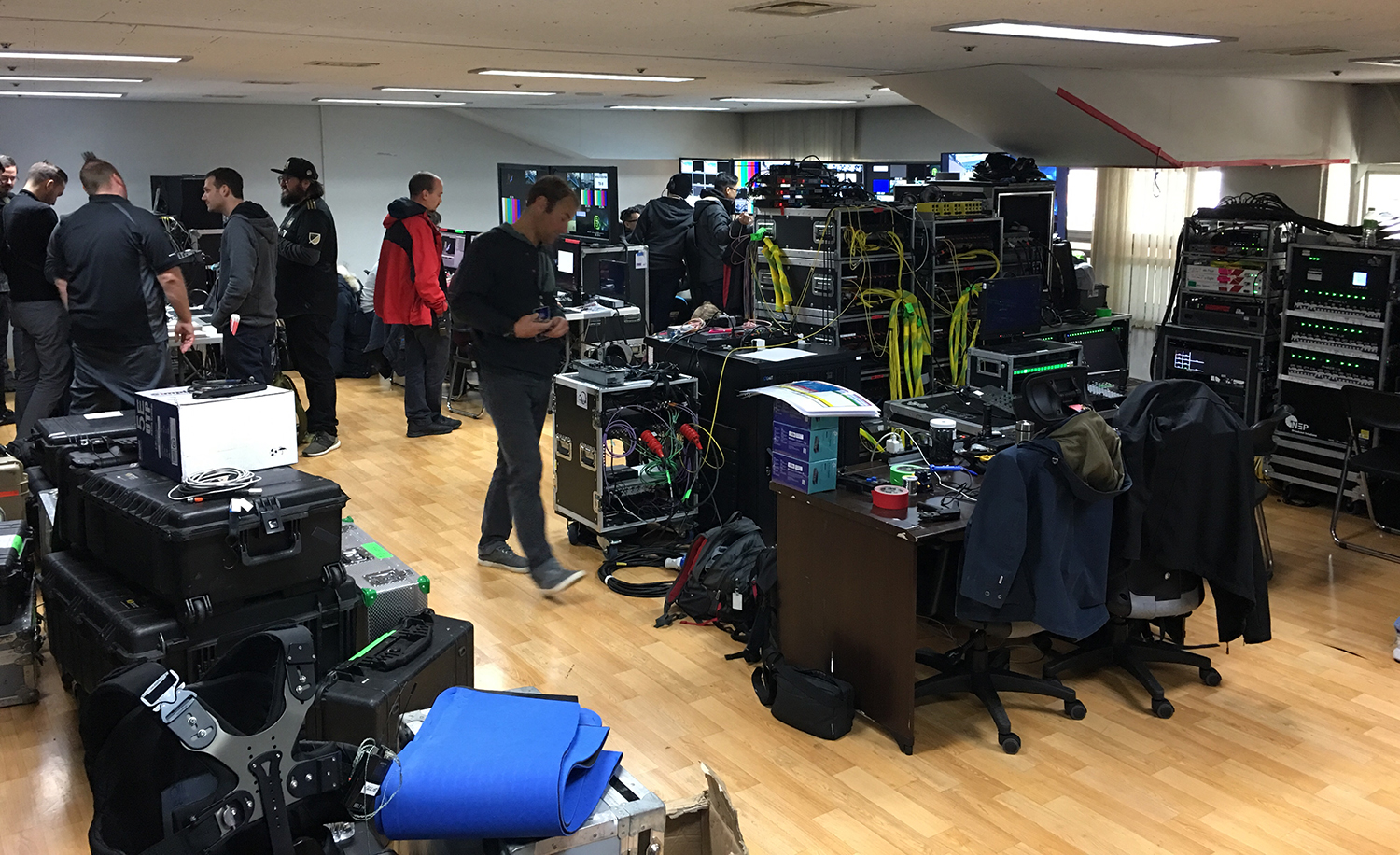 “Reducing four [production] trucks onsite to zero in a single year has been an incredible achievement for us,” says Rosenthal. “Similarly, bringing bandwidth [to deliver video/audio feeds back home] down to 1-GB allows us to do four complete productions offsite. Over the course of the last 18 months, we have been working hard to accomplish this goal, and it’s gratifying to see us going to a modified flypack and truly take advantage of our remote capabilities. We will continue to look to push the envelope and reduce our footprint as much as we can.”

“We’re always looking at improving this [at-home workflow] for everyone,” says Rosenthal. “MSI was our first test on several workflows, and these have been modified to continue testing throughout Worlds. A few of the critical enhancements have to do with remote production. This is vital for efficiency, in addition to keeping consistency with crew by lowering the amount of time some teams need to be on the road.” 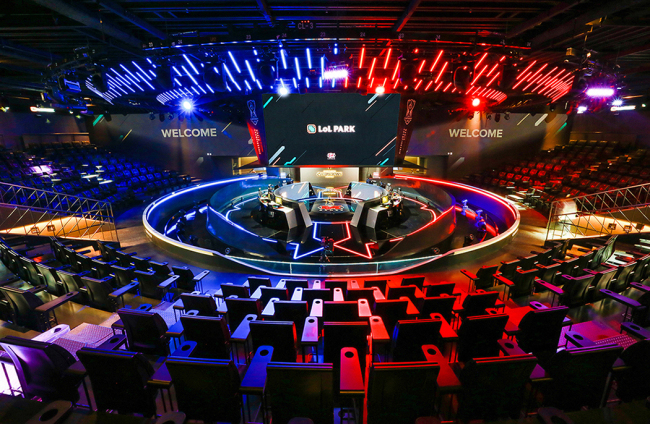 The Play-In Stage took place at Seoul’s recently built 56,900-sq.-ft. LoL Park arena, which has a capacity of 500 people and will serve as home to League of Legends Champions Korea (LCK) beginning next year. The state-of-the-art esports facility was the result of a close collaboration between the Riot Games central team in Los Angeles and the local team in Korea.

“The launch of the studio and LoL park was a big moment for both the local Korea team and Riot as a whole,” says Rosenthal. “The build and commissioning of the studio and control room were a great example of collaboration between the central team and the local Korean team. The central [team] was able to share context and specific workflows that we developed over the multiple studios we helped build around the world.”

Instead of trucks onsite, Riot Games leveraged LoL Park’s brand-new control room to produce the local Korea feed and content for the in-venue LED screens. For the world feed, Riot sent audio and camera feeds back to its L.A. facility, where the show was directed/cut by the production team and observers (in-game camera operators) and then distributed to streaming/broadcast partners across the world.

“One of the advantages of remote productions for esports is that the most important feed can be rendered natively at the home studio with no compression,” says Riot Games Global Technical Director Maxwell Trauss, who architected the company’s remote systems. “This lets us have full-quality gameplay, graphics, and playback and compress only cameras. Both the viewer and production benefit from this workflow.”

Despite delivering the Play-In Stage in 18 languages and to more than 20 digital platforms and television channels across the globe, Riot was able to deploy a fairly lean production team at LoL Park: roughly 100 crewmembers were onsite. In addition, Riot teams around the world integrated their own language-specific feeds from the broadcast out of their respective regional studios, such as Los Angeles and Shanghai.

In terms of the onsite LED show, the arena at LoL Park features three main viewing screens for the audience, an LED display at each player’s position, and a center floor LED circle. The venue marries this with an in-arena LED ribbon screen behind the audience and projection walls both inside and outside the venue.

A Production Marathon: Evolution From Group to Semis in Korea
Any operation spanning more than a month and five drastically different venues in five cities is going to evolve. Although the camera complement has varied depending on the venue, Riot generally deployed about 30 cameras at each stage leading up to the Final, including 10 pro-player POV cameras and several jibs and Steadicams. As always, the Riot production team reacted and adjusted broadcasts on the fly based on live audience feedback throughout the tournament.

“At Riot, we produce our shows for the players, and we truly mean it,” says operation lead Marc Hilko. “I come from the broadcast/production world, but I have never been on a show that takes live critical feedback (for instance, via Twitter) for something like a light being too bright to be able to enjoy the gameplay on the screens or a pro’s reaction to winning/losing. Keeping all of this in mind while continuing to raise the bar on innovation while maintaining sustainability is a challenging balance.” 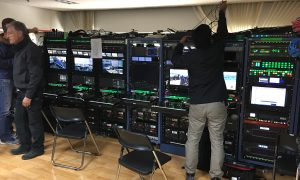 When the LoL action shifted to BEXCO (Busan Exhibition and Convention center) in Busan for the Group Stages and Quarterfinals, Riot reverted to a more traditional LED setup for the proscenium show. A seamless LED screen was positioned in front of each set of player sleds and a large LED screen sat behind each team. These were used for various show elements, such as champion select, displaying the player POVs onsite, and objective callouts like “dragon” and “baron.”

For the Semis, nothing could be hung from the roof at Gwangju Women’s University Universiade Gymnasium, and Riot was forced to install ground support structures and hang the entire show off that. The stage design was similar, though slightly larger to fit in the building, and an additional trophy stage was added to help build the momentum to the Finals. Riot also added two projection screens due to the increased audience size (more than double the Group Stage capacity).

To the Final: Bigger Screens and Stages, More Tech Toys, Many Surprises
The size of each show and equipment levels grew gradually throughout each stage before exploding into the Final, always among the biggest shows on the esports calendar. Saturday’s production featured a far bigger and more complex staging and LED setup than previous rounds, taking a crew of 260-plus (excluding stage hands) eight days to build before rehearsals could begin (which meant that load-in dates for the Final and the Semis were the same). 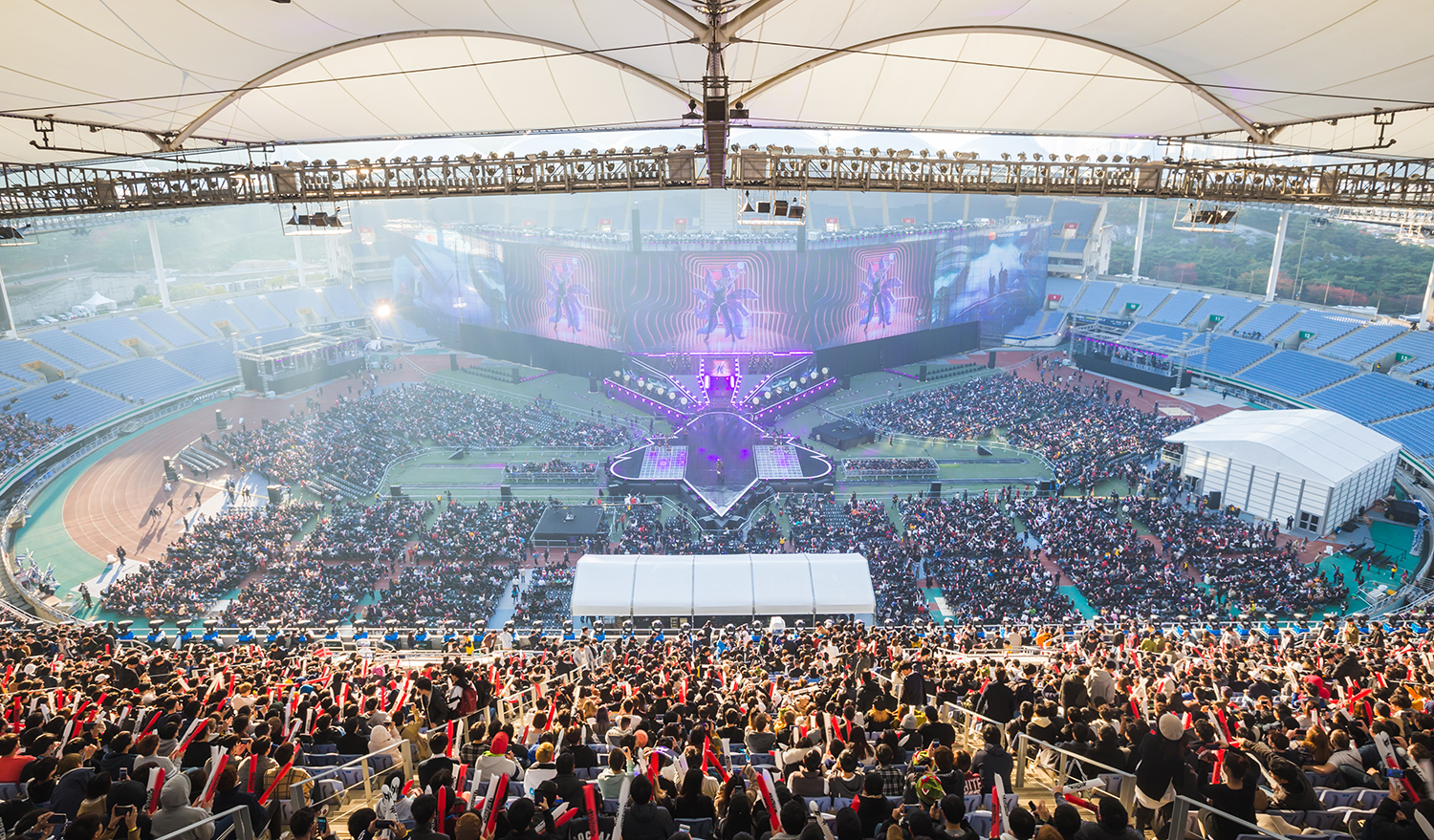 Riot erected three massive 32- x 18-meter LED screens for the stadium’s large audience. The players were located in their own pods to protect them from the amount of audio needed to pump into the stadium and any potential weather-related issues.

“The staff for front of house is bigger to accommodate the larger audience. We typically have a musical element for the Opening Ceremony, which means more people and more complexity, and that leads to larger facilities and logistics,” said Hilko prior to the event. “We are building more than a dozen temporary tents to accommodate the needs of VIPs, backstage and front-of-house crew, on-camera talent. It’s really exciting to start in a smaller studio and continually grow as the event goes on, to feel the excitement grow along with the size of each stage. The execution of the Final is always very exciting.”

Riot also added a Spidercam (for the second consecutive year) and an RF Steadicam to the complement of more than 30 cameras. 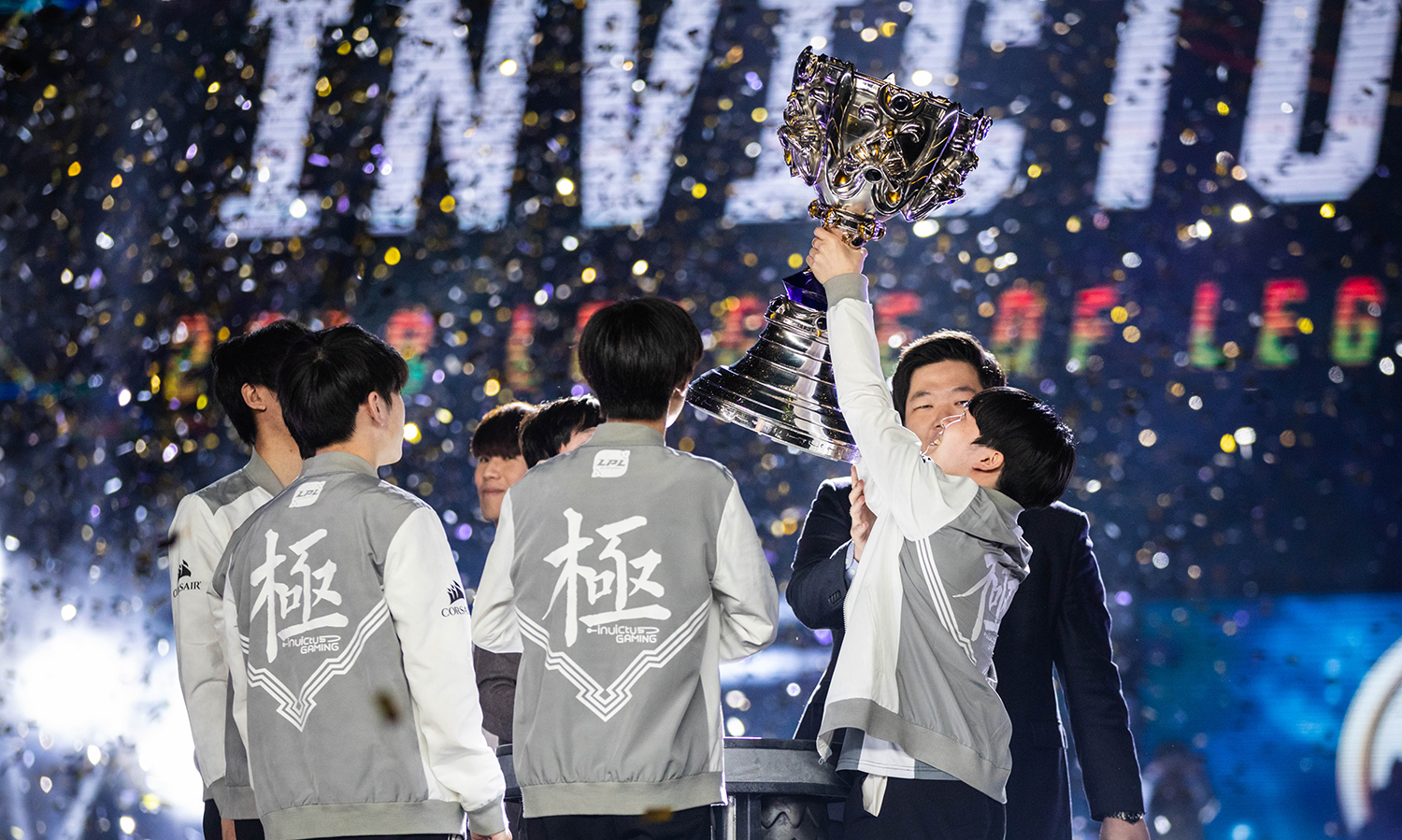 In addition to Korean and Chinese broadcast teams onsite (as in previous rounds), English broadcast partners had on-air talent at Incheon Munhak Stadium.

Although the show was bigger than ever, Riot continued to maintain its at-home production and leverage its L.A. facility to integrate the world-feed show. There were 30 transmission paths to Los Angeles and 14 return paths to Korea. In addition, there were eight inbound/outbound paths going to Korea Riot control room at LoL and four to the China Riot control room.

“The Final is always more complex for a number of reasons,” says Ray Panahon, technical lead, esports, Riot Games. “We have a ton of router I/O to consider: multiple send and receives; we have highways of signals going everywhere, some coming back. Being remote is also challenging, with the TD, director, and observers in Los Angeles and the [players], game servers, and cameras onsite. Lots of communication is needed with this separation.”

An Army of Vendors Delivers Across the Globe
To achieve the massive scale of the Final and maintain the marathon run of the World Championship production, Riot enlisted many of its long-time technology vendors and service providers: NEP/Bexel for broadcast equipment, CT Asia for LED, Serame Design lighting, Concom for production services, ANP for front-of-house activities, Haivision for encode/decode, Workshop for sets and scenics (with additional help from Show Design and JK Design and local partner Dream Maker), LG U+ for fiber connectivity in South Korea, and CAT Entertainment Services for power. 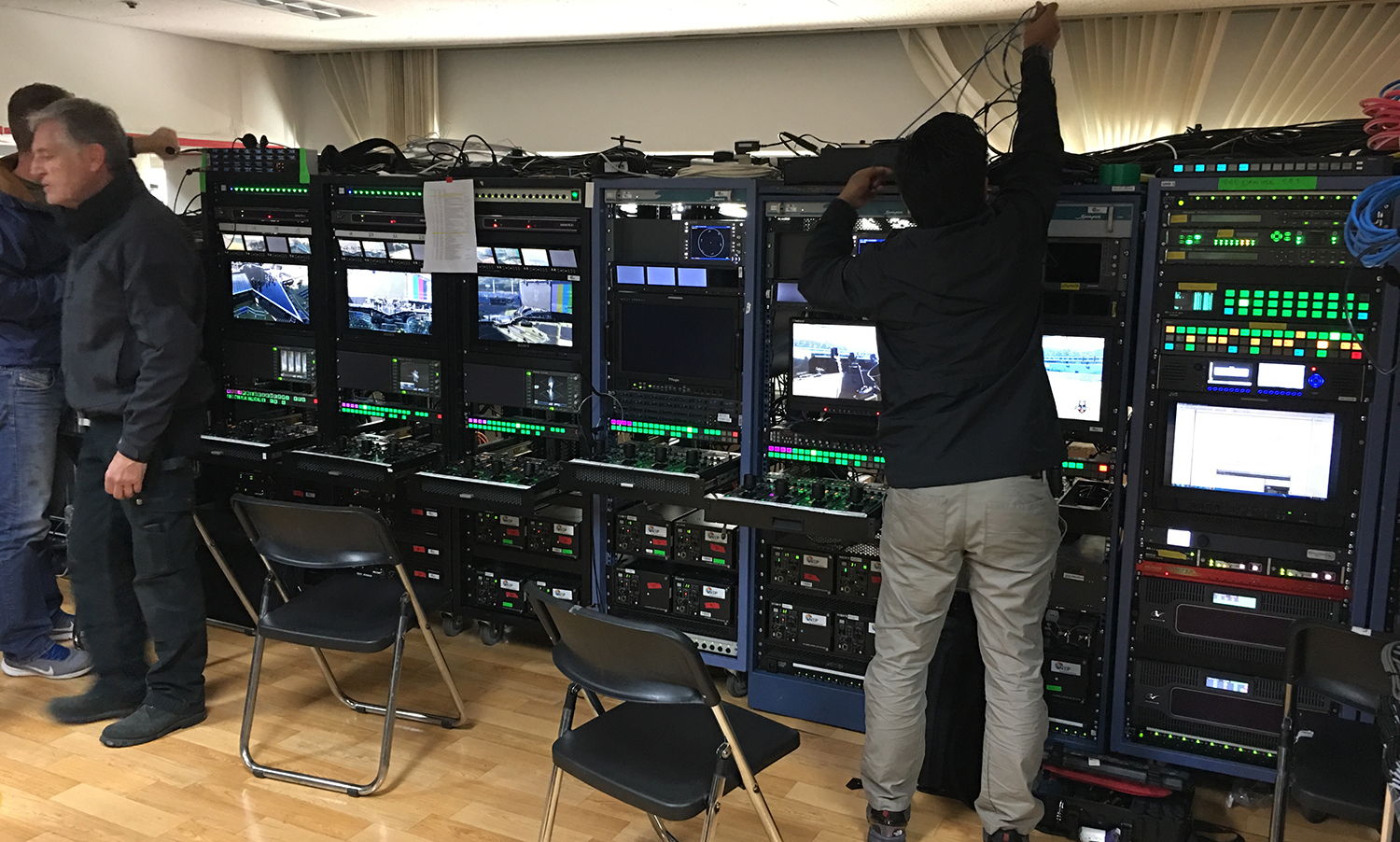 “League of Legends is played in every corner of the world, and we feel that we have an obligation to deliver a best-in-class show to every one of our fans,” says Rosenthal. “The remote capabilities we have developed allow us to deliver a top-tier product anywhere in the world. Empowering any one of our studios to integrate with our core world feed and build a show customized to their audience helps us deliver a lot of player value. Now hosting an event in Europe or Asia or North America doesn’t force us into region-specific tradeoffs and allows all of our shows to hit the high bar our players and fans deserve.”