Every game from the Canadian Football League (CFL) will be available live to fans in the United States through a new multi-year agreement with ESPN and ESPN+. 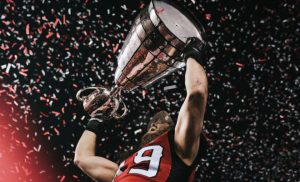 “It’s exciting for the CFL to continue its relationship with ESPN and expand onto ESPN+,” says CFL Commissioner Randy Ambrosie. “We have seen increases in interest in the U.S. market for Canadian football and we look forward to building on the momentum and captivating American audiences for seasons to come.”

A minimum of 20 games, including one Division Final and the Grey Cup, will be televised live on ESPN networks, with more than 65 regular season games available exclusively on ESPN+, the direct-to-consumer subscription streaming service from The Walt Disney Company’s Direct-to-Consumer & International segment and ESPN.

“ESPN+ is an exciting new platform that is letting us directly serve fans in new ways, and we’re excited that it will help us expand the way we cover the CFL,” says Burke Magnus, executive vice president, programming, ESPN. “We have a great, long-standing relationship with the CFL and look forward to bringing their dynamic league to the growing number of CFL fans in the US for years to come.”

The 2019 CFL season will open in June and continue for over five months, with the 107th Grey Cup presented by Shaw capping the season on Sunday, November 24 in Calgary.

In the UK and Ireland, BT Sport will feature coverage of up to 85 CFL games per season, as a part of its long-term collaboration with ESPN.

CFL teams are scheduled to open their training camps for the 2019 season on Sunday, May 19. The season begins on Thursday, June 13 when the Saskatchewan Roughriders face off against the Hamilton Tiger-Cats. Edmonton will host Montreal on Friday, June 14 and the Calgary Stampeders will launch the defense of their championship on Saturday, June 15 when they host the Ottawa REDBLACKS. Opening week wraps up with the Winnipeg Blue Bombers traveling to BC to play the Lions.