ESPN reporter and host Jen Lada will serve as master of ceremonies at the 2019 SVG College Sports Media Awards in association with NACDA (CSMA) on Thursday, May 30 at the Omni Hotel at CNN Center in Atlanta. Deadline to enter the 11th annual CSMAs is Monday, April 22, so get your entries in now! 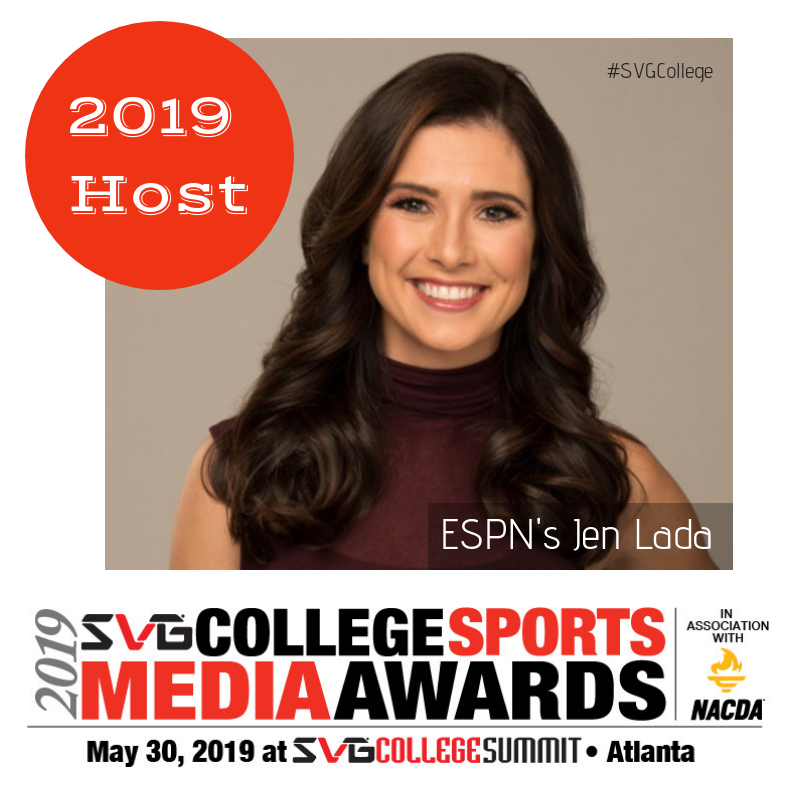 The SVG College Sports Media Awards in association with NACDA recognize the best in college sports-video production, celebrating those who have pushed the envelope and set a higher standard for the quality of live and pre/postproduced college sports-video content. The CSMAs headline the 2019 SVG College Summit which is set to take place at the Omni Hotel at CNN Center in Atlanta.

Lada is a versatile commentator for ESPN, appearing regularly as a features reporter on College GameDay, SportsCenter’s award-winning storytelling brand SC Featured and many more marquee events. The Marquette graduate also serves as a host across multiple shows, including College Football Live. She has had success at the College Sports Media Awards herself, in 2017 winning trophies for Outstanding Special Feature in the National Networks division (“Heart of a Tiger”) for ESPN and in the Regional/Local Networks and Production Companies division (“Texas Fight”) for Longhorn Network.

NOTE: Lada will also be speaking as part of our SVGW networking event at the SVG College Summit. SVGW will be held on Wednesday, May 29 beginning at 4 p.m., ET. To learn more about SVGW, contact SVGW Director Karen Hogan Ketchum at karen@sportsvideo.org.

DIVISIONAL RESTRUCTURE
This year’s CSMA competition features a restructuring of two divisions with, for the first time, Conference Offices and Governing Bodies competing in their own division. In addition, all media organizations — national networks, regional sports networks, third-party packagers, independent production companies — will compete in the new Professional division.

For more information on the SVG College Sports Media Awards in association with NACDA and to watch winners and finalists from the past, visit www.collegesportsmediaawards.com. For more on the SVG College Summit, visit www.SVGCollege.com. If you have any additional questions, you can contact Program Director Brandon Costa via email at Brandon@sportsvideo.org.