The NFL season is just around the corner, and the major television networks announced their full menu of games for the 2019 campaign:

Marking its 60th season broadcasting the NFL, CBS Sports’ 2019 NFL on CBS schedule begins on Sunday, Sept. 8 highlighted by top games from the AFC and more marquee NFC crossover matchups than ever before.

The NFL on CBS schedule features games being played in the NFL’s highest-rated and most-watched window each week, the 4:25 PM, ET national game on doubleheader weeks. Highlighting the schedule is the rematch of last season’s epic AFC Championship Game, which was the second most-watched AFC Championship Game in 42 years – Kansas City vs. New England – in Week 14 (12/8), as well as New England-Philadelphia in Week 11 (11/17).

The NFL on CBS schedule also features more marquee cross-flex games than ever before, including four of the eight doubleheader weeks anchored by games in the 4:25 PM, ET national window highlighted by Dallas-N.Y. Jets in Week 6 (10/13), New Orleans-Seattle in Week 3 (9/22) and Minnesota-Chicago in Week 4 (9/29).

..Fox Sports announced its 2019 NFL schedule in anticipation of a monumental year for the network’s football coverage, highlighted by its exclusive presentation of Super Bowl LIV on Feb. 2, 2020, live from Hard Rock Stadium in Miami.

Fox Sports kicks off the regular season in Week 1 with America’s Game of the Week, television’s No. 1 show for 10 straight years, as the New York Giants take on the Dallas Cowboys on Sunday, Sept. 8 from AT&T Stadium in Arlington, Texas. With 11 weeks of Thursday Night Football Presented by Bud Light, plus a Sunday afternoon slate, Fox Sports’ 2019 NFL schedule includes 110 total regular-season games. Fox’s presentation of Thursday Night Football from Weeks 4-15 (excluding Thanksgiving night), is simulcast on NFL Network and Amazon Prime Video and distributed in Spanish on Fox Deportes. NFL Network and Amazon Prime Video simulcasts are subject to change. Fox’s strong 2019 regular season schedule features 37 divisional matchups – 10 from the NFC East, nine from the NFC West, eight from the NFC North, seven from the NFC South and one game each from the AFC North, South and West.

In the MNF opener, Drew Brees and the Saints host Deshaun Watson and the AFC South champion Texans at the Mercedes-Benz Superdome in a battle of 2018 playoff teams. A year ago on MNF, Brees became the NFL’s all-time leader in passing yards (Oct. 8 vs. Washington). The Saints previously played in the 2017 MNF opener (at Minnesota), while the Texans last opened the season on Monday night in 2013 (at San Diego, late game of the doubleheader).

Then, MNF’s most-popular rivalry will be renewed when Oakland’s new QB-WR duo of Derek Carr and Antonio Brown and the Raiders host the Broncos, now led by quarterback Joe Flacco. The AFC West opponents played in ESPN’s 2018 season-finale and this will be their 19th meeting all-time on Monday night, more than any other matchup in the history of the series. The Broncos also extend the NFL’s longest current streak, appearing on MNF for the 28th consecutive season (1992-present). 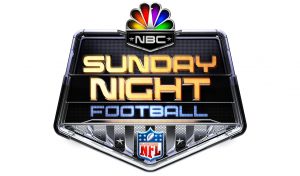 NBC will televise the first game of the NFL’s milestone 100th season on Thursday, Sept. 5, from Soldier Field in Chicago, as Khalil Mack and the defending NFC North-champion Bears host Aaron Rodgers and the Green Bay Packers in NFL Kickoff 2019 at 8:20 p.m. ET. Packers-Bears is the most-played rivalry in NFL history, with the Kickoff game the 199th meeting between the clubs (first game was Nov. 27, 1921).

Then, in the season opener of Sunday Night Football on Sunday, Sept. 8, New England will raise its sixth Super Bowl banner at Gillette Stadium in Foxboro, Mass., before Tom Brady and the Patriots host Ben Roethlisberger and the Pittsburgh Steelers.

The Roethlisberger-Brady meeting in Week 1 is the first of an NBC SNF schedule packed with star-studded quarterback matchups, headlined by 2018 NFL MVP Patrick Mahomes facing two-time MVP Aaron Rodgers for the first time, as the Kansas City Chiefs host the Green Bay Packers on Oct. 27.

The 13-game Thursday Night Football slate of games features 11 Fox games which are scheduled to be simulcast on NFL Network and Amazon Prime Video, in addition to two NFL Network exclusive games.

Live game audio of Thursday Night Football will be broadcast nationally by Westwood One, and carried on SiriusXM and the TuneIn app.