Fox Sports and Chapman Aerial Production will make some history this weekend when the broadcaster incorporates a drone-camera system into its coverage of NASCAR action at the Talladega Superspeedway in Alabama.

“The question always is, does technology improve the coverage, and a place like Talladega, which is a three-turn track, is ripe for the kind of coverage a drone can offer,” says Brad Cheney, VP, field operations and engineering, Fox Sports. “Without a doubt, we will look to use drones in places where it can really make a difference.” 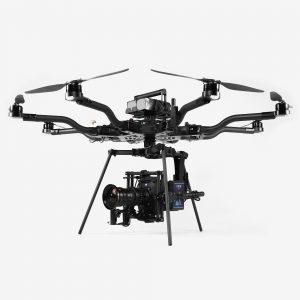 Fox Sports will use the Freefly Alta 8 drone for NASCAR coverage this weekend.

A Freefly Alta 8 drone with a Freefly MōVI Carbon camera gimbal with five-axis camera stabilization will be outfitted with a Panasonic Lumix DMC-GH4 camera coupled with a Fujinon 20-120mm lens. Thanks to the MOS sensor, the zoom ratio is doubled to 40-240mm.

With a diameter of roughly 2.5 ft., the Freefly Alta 8 can carry up to 15 lb. and has enough stability to battle through the turbulent air that cars can throw off as they race around the track. It will also be able to hit speeds as high as 35 mph.

“The drone needs to be dynamic, fast, and capable of having a big enough payload for the right imaging system,” adds Cheney. “The Freefly provides a platform that will give us dynamic tracking shots that will bring the fans closer and are more compelling. It will be similar to the shots we get with the robos on the edge of the walls but with movement.”

The project required a lot of communication with the FAA, Homeland Security, NASCAR, the production team, and race officials, with temporary flight restrictions in place for NASCAR races.

“It’s been a great partnership with all of those groups,” says Cheney.

The production team has bought into the process, and director Artie Kempner says the use of a drone this weekend fulfills a vision Fox Sports has for racing coverage: “It will provide the viewer with dynamic view not seen before in motor sports.”

The drone can fly for about 19 minutes before the battery needs to be changed, a process that Cheney says takes about a minute. He also says that the Freefly system is capable of landing safely even if it loses half its engines and that all of the normal protections are in place: if the pilot loses communication with the drone, it will automatically return to its home base.

Pre-race programming begins Sunday with NASCAR RACEDAY at 12:30 p.m. ET on FS1 and the Fox Sports App, moving to the Fox broadcast network at 1:30 p.m., followed by the Monster Energy NASCAR Cup Series Geico 500 at 2:00 p.m.