After the giant success of the FIFA Men’s World Cup in 2018, Telemundo Deportes revealed more details around its digital coverage plans for the FIFA Women’s World Cup France 2019 and 2019 Copa America. The company announced plans for more than 800 short-form pieces of content including original series, highlights, and recaps to be featured across TelemundoDeportes.com, Telemundo Deportes app, Twitter, Instagram, Facebook, and YouTube. Telemundo Deportes’ digital content includes the debut of its first live show to air on Twitter, an animated series and extensive short-form video content. 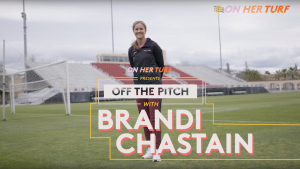 “We are extremely proud of the entire team’s effort to ensure that we are providing unique content extensions to the two best, global tournaments this summer, playing out on Telemundo,” said Joaquin Duró, Vice President of Digital, Telemundo Deportes. “Our group recognizes the value of providing meaningful content across all platforms for our audience and this summer we will deliver the most complete experience for our fans.”

The special content complements the match coverage and is part of Telemundo Deportes’ 750+ hours of multimedia sports programming for the FIFA Women’s World Cup and Copa America, ensuring the most complete tournament experience for all fans and on any platform.

Telemundo Deportes launches its first show to stream live on Twitter as part of its coverage for Summer of Soccer, premiering on Friday, June 14. Futbol After Dark (working title) will be produced by the NBCUniversal Digital Lab and Telemundo Deportes, and is set to stream live twice a week at 11 p.m. ET during the FIFA Women’s World Cup and Copa America. Hosted by Sports Illustrated’s Planet Futbol presenter and writer Luis Miguel Echegaray and LA-based sports reporter Ivana Rojas, the late-night Live Twitter show will highlight and celebrate the key moments, stories, and conversations behind the tournaments. This series will not only cover the action on the pitch but will take things further into the culture and social conversations behind the FIFA Women’s World Cup and Copa America. The show will be streamed twice a week and run through July 7 on Telemundo Deportes’ Twitter.

As Telemundo Deportes’ first-ever animated scripted series, Brasil 19 Shopping Mall is set to feature the best of players of South American soccer preparing viewers for everything they will get to enjoy in the next Copa America. Fun, creative, and somewhat irreverent, Brasil 19 Shopping Mall pays tribute to the protagonists of this summer’s biggest South American tournament. The six-episode animated series begins on Saturday, June 8 with new episodes available daily through June 13, leading to Telemundo Deportes’ anticipated exclusive Spanish-language coverage of the 2019 Copa America. The show will be available on Telemundo Deportes’ site, Youtube, Facebook, and Instagram. 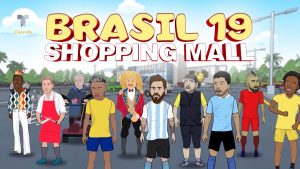 Off the Pitch
In partnership with NBC Sports’ On Her Turf, Telemundo Deportes presents Off the Pitch, an 8-episode video series focused on current and former USWNT players’ lives outside of their playing careers. The series debuts Tuesday, May 28 and will be posted weekly on Tuesdays and Fridays leading up to the kick off of the FIFA Women’s World Cup, and will be available via On Her Turf and Telemundo social and digital platforms. Off the Pitch will cover the female athletes’ playing days, their lives as women in sports, interests they pursue off the pitch, as well as their thoughts about the upcoming FIFA Women’s World Cup. Featured players include Briana Scurry, Carli Lloyd, Michelle Akers, Kristine Lilly, Brandi Chastain, Julie Foudy, Carla Overbeck, and Amy Rodriguez.

On Her Turf is a media partnership between Refinery29 and NBC Sports that shares in the celebration and amplification of women in sports. The @OnHerTurf Instagram account encourages users “to be the best version of yourself, both on and off the field.”