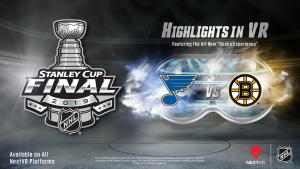 Following each game of the Stanley Cup Final, fans will be able to access highlights in the Stanley Cup Final channel within the NextVR app. NextVR is also unveiling a completely new way to experience hockey with its “Goalie Experience” viewpoint, putting fans closer to the on-ice action than ever before and making them feel like they are in the crease at an NHL game.

“Since we launched the NHL channel on NextVR earlier this year, hockey fans have been loving the behind the glass experience. The Stanley Cup Final is an opportunity to crank things up for our fans. Unlike traditional highlights, the goalie experience will enable fans to center their attention on the most crucial moments of the games,” said Danny Keens, Vice President of Content, NextVR.

“The intensity, speed, and excitement of our game hits an all-time high during the Stanley Cup Final,” said Chris Golier, NHL Vice President of Business Development. “NextVR takes this to the next level for our fans by enhancing the natural sound of the arena and magnifying the goalie experience, such as with camera placements near the nets. Fans will actually be able to feel the puck slide into the net and hear the players’ skates scraping on the ice more vividly than ever before.”

Currently, fans can experience VR highlights of the 2019 Honda NHL® All-Star Game and 2019 Stanley Cup® Playoffs for free inside the NextVR app.