The multiplatform sports network features a variety of distribution options

Stadium has announced a new partnership with Major League Lacrosse (MLL). The 24/7 multiplatform sports network will air 12 games throughout the 2019 season and produce weekly segments featured in its daily studio programming. 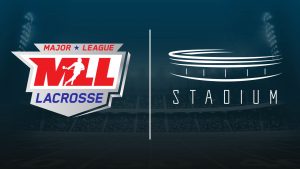 “The sport of lacrosse has been an important component to Stadium since our inception,” noted Stadium CEO Jason Coyle, adding, “We’re excited to partner with Major League Lacrosse for the 2019 season. The experience and vision shown by the new leadership team at MLL has been a tremendous addition to the league, and we’re all looking forward to the upcoming season.”

Said MLL Commissioner Alexander Brown, “We are thrilled to partner with such an innovative broadcaster. Stadium’s diverse ownership group and expansive distribution will allow lacrosse fans nationwide to see the absolute best our game has to offer, anytime, anywhere on multiple devices.”

Here’s the full schedule of MLL on Stadium: