ESPN and the National Women’s Soccer League (NWSL) have agreed to televise 14 league matches during the 2019 season. Eight matches will air on ESPNEWS, and the remaining six, including the two semifinals and the championship, will air on ESPN2. 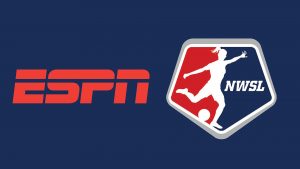 The NWSL features many of the world’s top players such as Alex Morgan (Orlando Pride), who scored the most goals by a single player in a Women’s World Cup game on June 11; Carli Lloyd (Sky Blue FC), who set a Women’s World Cup tournament record June 16 with a goal in her sixth consecutive game; Marta (Orlando Pride), the all-time leader of men and women soccer players with her record 17th World Cup goal; and Megan Rapinoe (Reign FC), who continues to dominate the sport with the most goals scored in Reign FC franchise history.

“NWSL is a global leader in women’s professional soccer, with collectively the most talented players in the world. Together with the reach of ESPN’s vast network, we have the opportunity to bring more games to a broader audience across the country and world,” said NWSL President Amanda Duffy. “Even in the year leading up to the Women’s World Cup, we have continued to experience tremendous growth through the support, engagement, and visibility from our fans.”

Last year, more fans came to see NWSL games than any other regular season in the league’s history, with a total regular season attendance of more than 650,000, and the 2018 NWSL Championship broke the record for the largest all-time crowd of a women’s professional soccer championship with a sellout crowd of 21,144.

“We are pleased to once again televise the National Women’s Soccer League and showcase many of the world’s top female players when they return to their professional club teams,” said Burke Magnus, Executive Vice President, Programming and Scheduling, ESPN. “The success and excitement of the World Cup in France has been on full display and the NWSL represents the best women’s club soccer in the world.”