Cavs Legion Gaming Club (GC), the NBA 2K League affiliate of the Cleveland Cavaliers, has unveiled plans for an esports center in Cleveland’s Battery Park neighborhood. The center, which is set to open this fall, will serve as the practice facility for Cavs Legion GC and will be open to the public for organized gaming competitions, tournaments, and events. The over 2,700 square foot venue with views to Edgewater Beach will feature state-of-the-art gaming technology, full-service broadcast capabilities to produce live streams and content, as well as other amenities to create a comprehensive esports and gaming experience unlike any other in Northeast Ohio. 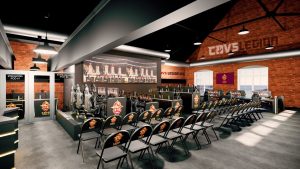 “We’re thrilled to introduce this state-of-the-art facility designed to provide esports enthusiasts from Cleveland, Northeast Ohio and beyond a place to come together to compete, create and celebrate the world of competitive gaming,” said Nic Barlage, Cavaliers president of business operations. “Not only will this training center give our Cavs Legion team a first-class venue to practice and sharpen their skills for the NBA 2K League, but it will also provide our region’s next generation of star gamers best-in-class tools to fuel their passion for esports.”

The latest professional gaming setups, hardware, and equipment will be utilized throughout the new center for practice, competition, and content creation. Features include:

Public tournaments, esports educational programs, rental opportunities and more will be planned and available in the open-layout space during the Cavs Legion offseason.

Media and esports fans throughout the region can look forward to a Grand Opening event and the first public esports competition opportunity in the fall of this year.