The area around Vail, CO, has long been a combination of natural beauty and modern taste, and the Vilar Performing Arts Center at Beaver Creek Resort has plenty of both. Earlier this year, the venue took a huge step forward — one that solved technical problems, brought it fully up-to-date in a fast-changing theater-technology landscape, and positioned it for the future — when it installed a suite of DiGiCo products. In addition, DiGiCo was also involved in London’s Royal Albert Hall. 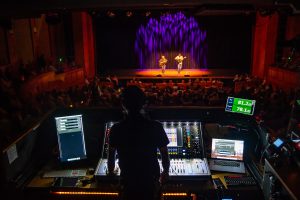 The new and unique 4REA4 system also installed serves as a matrix hub, system processor, and more. All of this, along with a new A164Wall LCD I/O expander for the stage, joins a DiGiCo SD9 console already in place for monitor mixing. Clearwing Systems Integration’s Denver team supplied the technology package.

Designed by Hardy Holzman Pfeiffer Associates of Los Angeles, the compact yet muscular Vilar Performing Arts Center’s wood-paneled columns, walls, and ceilings, combined with its European-style curved-horseshoe seating layout, give the venue a timeless air. Less pleasant, however, were the noise and other artifacts of its original analog console and audio systems.

“Ground loops and noise were constant, and it was clearly time to upgrade,” says VPAC Technical Director Matt Phillips. “Working with local DiGiCo dealer Navatech + Warman Marketing and Ryan Shelton of DiGiCo U.S. distributor Group One, they conceived — and VPAC integrated — a system comprising the SD12, 4REA4, and the ancillary products that would leapfrog the Vilar Performing Arts Center from the 20th century into the networked digital present and prepare it for the decades to come.”

He says of the non-profit theater, “We’re a small venue but one with a passionate donor base. We want to be the best of our size in the region and be able to attract artists and performers that would go to larger venues, such as Red Rocks. The DiGiCo technology lets us do that; the SD12 is a rider-friendly console that gives us a huge amount of functionality and flexibility for our rotating production staff and for guest FOH engineers. Most are familiar with the SD workflow, and, if they’re not, it’s incredibly intuitive, and we can bring them up to speed on it quickly.

“The 4REA4 is a very new technology,” he continues, “and we understand it’s still evolving. But it gives us a system at front of house that will soon ride on the Optocore loop and currently provides us additional processing for the PA system, such as limiting before the crossover, because we have a strict dB limit in the house, and for additional EQ. Also, it acts as a matrix and can let guest consoles connect via MADI, Dante, AES, or analog, as well as lets us send feeds to different areas, such as a separate feed we can now send to the patron lounge, backstage area, and my lighting position. There are so many things that we can do now that we simply couldn’t do before.”

Phillips enumerates other ways that the DiGiCo products have made the Vilar Performing Arts Center’s goal of being the best in the Rockies achievable, including putting its audio on a 32-bit level and setting the stage for future enhancements, including potentially offering artists a multi-track recording of their shows. And a SoundGrid server for the Waves plug-in bundle that was part of this package lets more visiting artists and their engineers simply walk in and perform.

“Both DiGiCo and Clearwing have been fantastic when it comes to support, which was also a big factor for why we chose them,” he adds. “We’re competitive with any venue of our size now, and, just as important, we’re relevant for a decade or more to come. Plus, it all sounds great, and it came in within budget, so everyone is happy.” 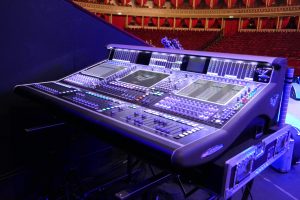 Royal Albert Hall
Much has already been written and published about the extraordinary new house sound system recently unveiled by the Royal Albert Hall. No wonder: it is the world’s busiest venue and one of the most highly specified venue refurbishments in the history of entertainment technology. It is only fitting that this most iconic of venues should be suitably equipped for the demands of 21st-century performance, and, as it approaches its 150th anniversary in 2021, this much loved London landmark now boasts an installed audio infrastructure to rival any.

Equipped throughout with d&b audiotechnik loudspeakers in a bespoke configuration, the new design provides seamless coverage of every single seat for the first time in its 148-year history. Installed by SFL Group during the Hall’s busiest ever year, yet without any interference to the program, the new audio system is comfortably capable of handling every aspect of the Hall’s remarkably diverse portfolio of events. When it came to choosing a contemporary digital-audio-mixing system, in common with so many venues, theaters, and touring productions globally, the choice was simple: it had to be DiGiCo.

“We were approached by [RAH Head of Production and Technical] Ollie Jeffery when they decided the time was right to bring sound in-house, rather than to continue to hire in the equipment and expertise,”” says Tim Shaxson, technical sales manager, DiGiCo.

“They were looking at a wide variety of options as far as PA was concerned, but, when it came to consoles, there was only one brand under consideration, and that was DiGiCo. They knew they needed a console that visiting engineers would be comfortable with, that had the flexibility to cover the wider variety of shows the RAH gets involved in, and, of course, that offered the best possible audio quality to complement the new PA system.

“We were pleased that the Royal Albert Hall chose Autograph as their partner in this project,” says Shaxson. “The technical knowledge and support that they offer is first-class.”

Autograph supplied three DiGiCo consoles: an SD7 Quantum, an SD10 (both of which are Waves-enabled and equipped with DiGiCo’s very latest 32-bit analog cards), and an SD9. All are intended to fulfill a variety of roles determined by individual productions. The consoles sit at the heart of an audio network that runs over a DiGiCo Optocore fiber loop with a redundant Dante network over Ethernet. To facilitate all possible connectivity options, the DiGiCos are fitted with a selection of multi-format I/O cards, including analog, AES, ANA, DMI Optocore, and DMI Dante. A pair of BroaMan Route66 Optocore AutoRouters, manage the Optocore links from the DiGiCo consoles and also act as central routers in redundant “starred” network.

Autograph’s involvement started many months before delivery, as Head of Technical Support Rob Tory explains: “We were approached originally by the RAH as they knew of our long experience with DiGiCo products and the systems we install and support throughout the West End. Consequently, we spent a lot of time with them well before the installation began, helping to determine what control surfaces and supporting infrastructure would work best. Once the design was complete and the equipment was all in hand, it was prepped, tested, and fully commissioned at Autograph before being delivered to the Hall.”

“These are the first consoles the RAH has owned, and, on a project of such scale, it was obvious for us to purchase DiGiCo,” says Jeffery. “DiGiCo’s reputation throughout the world as a reliable console that is used globally by touring acts, ensured that our vision to have the best was realized. [Audio Manager] Borneo Brown and [Audio Project Manager] Ben Evans have a long history with Autograph and to have the support of such a reputable company on the project was invaluable to its success.

“We are very proud of the new relationship with DiGiCo and Autograph,” he continues, “and look forward to continuing this for many years to come.”