Legendary sportscaster Jack Whitaker died of natural causes at the age of 95 on Sunday morning in Devon, PA. He was inducted into the Sports Broadcasting Hall of Fame in 2012 and had a career in sports broadcasting that was as full and rich as anyone could wish. 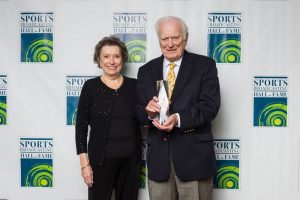 “When I first met Jack Whitaker in 1986 at Pebble Beach, I felt like I had just been introduced to Ernest Hemingway,” he said. “I grew up watching him deliver contemplative and contextual prose with his famous short essays, bringing class and dignity to his industry. He was enormously proud to have called Super Bowl I for CBS and was the last surviving network commentator from that landmark game. I spoke to him this week after hospice came to his home, and his mind was still brilliantly sharp right to the end.”

CBS Sports Chairman Sean McManus issued a statement expressing his condolences to Whitaker’s family, saying, “There will never be another Jack Whitaker in sports broadcasting.

“His amazing writing ability, on-air presence, and humanity are unmatched,” he says. “His unique perspective on sports ranging from horse racing to golf to NFL football was extraordinary. My father and Jack shared an incredible respect for each other and had the warmest of friendships that lasted for decades. Our thoughts and prayers go out to Jack’s family.”

To watch the Hall of Fame tribute video for Whitaker and his acceptance speech, click here. 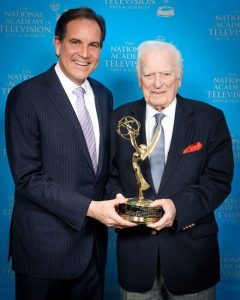 Whitaker’s television style, as exhibited on CBS and ABC from 1961 to 1995, certainly wasn’t slick. It was sophisticated and smart. He had style, which is why his admirers say he stood apart as one of the most accomplished of television’s early generation of wordsmiths, less an announcer than an essayist who dared to be poetic when just clever would do.

To say Whitaker is revered by other sports broadcasters and executives is an understatement. “I admired Jack so much. So did everybody else,” said Frank Gifford in 2012 when Whitaker was inducted into the Sports Broadcasting Hall of Fame. Gifford was teamed with Whitaker in Gifford’s early days at CBS. “He had a wonderful voice. He was intelligent. He’s just an extraordinary guy.”

Whitaker lived in the suburbs of Philadelphia, where he grew up and had his first fame as an on-air sportscaster for WCAU, then a CBS-owned station (NBC owns it now). It was quite a crew. One of his news buddies at the station was Ed McMahon. The news anchor was the soon-to-be legendary John Facenda, who was to become the “Voice of God” for the first years of NFL Films.

Whitaker and McMahon weren’t very excited about their long-term prospects at the station, Whitaker recalled. They would take the train to New York City, pound the pavement on Madison Avenue, then hustle to get back to the station by 11:00.

Eventually, McMahon became Johnny Carson’s sidekick. And Whitaker ended up announcing NFL games for CBS. Sports viewers probably remember him most for his work at major golf tournaments, at the world’s premier horse-racing events, at several Olympics, and as part of the broadcast team at the first Super Bowl.

He had a lifetime of great moments. He had vivid memories of talking to stars like NFL Hall of Famer Norm Van Brocklin and NBA great Lew Alcindor (now Kareem Abdul Jabbar), two sports legends he thought were particularly interesting because they had “varied interests, not just sports.” Indeed, Whitaker made plain that, while he loved sports, he was interested in a lot more than that and sometimes pondered the experiences he missed outside the sports world.

Still, he covered so many amazing events that it’s hard to say he missed much. Asked for his most vivid memory, high on his list was covering the Belmont Stakes in 1973 and witnessing Secretariat’s amazing 31-length victory. It’s a performance he succinctly described as “perfect.”

As the race ended, he exclaimed to his audience that Secretariat was so amazingly dominating that day, “I believe Dick Butkus could have ridden this horse today and won.”

Golf was also one of his specialties. He covered several Masters Tournaments — and was banished after one year when he innocently called a group of spectators following Jack Nicholas to the 18th hole a “mob.” The Masters didn’t have mobs, it was explained.

But a passage he’s often remembered for was uttered at the British Open at St. Andrews — and it seems emblematic of the essay you’re not likely to hear on a sports broadcast today. He peered out at the stunning, ancient, and impossibly challenging Scottish field of green and said, “Nobody designed this course. Nobody with a pencil and $2 million and five bulldozers. This was made by nature. It comes out of the ground. It was done with wind and rain and sun and the help of a few sheep. And so, while, for most Americans and other people, it’s not love at first sight at St. Andrews … St. Andrews’ Old Course is like a dry martini: an acquired taste, and, as such, it remains with you forever.”

(He said he tried to be a better golfer himself. He asked the pros for help: “I had the best teachers in the world. I was the worst student.”)

Signature moments like that at St. Andrews gave Whitaker his well-deserved reputation. “Jack was an original,” says Ed Goren, former vice chairman, Fox Sports Media Group, and fellow inductee into the Sports Broadcasting Hall of Fame in 2012. “He was an essayist. He was the Eric Severeid of CBS Sports. Jack had an appreciation of the English language, and, in broadcasting at times, we abuse the English language.”

Some people say some of the same things about Jim McKay, the sportscaster most remembered for his work at ABC’s Olympics telecasts and his unique spin on ABC’s Wide World of Sports. In 2012, McManus recalled the day Whitaker left CBS and joined ABC, where he and McKay would work together: “My dad said, ‘Of all the people up there writing in sports television, I think Jack Whitaker is the best.’ Really, when ABC hired him, it was almost like Montana and Marino as your two quarterbacks. They were both so strong and so good.”

Whitaker won the first-ever Emmy as Outstanding Sports Performer in 1979, and he’s in at least two sports halls of fame. The National Academy of Television Arts & Sciences gave him its Lifetime Achievement Emmy Award earlier this year. “That blew me away,” he said.

Whitaker, though, was not an excitable type. He was more thoughtful than that, and he had the ability to recognize that, after all, it’s just a game, however important some may seem. It was the athletes more than the competition itself that filled him with wonder.

In a candid and superb interview with MSG’s Fran Healy several years ago, Whitaker was asked what sport he most liked to cover. He answered, surprisingly, track and field, “because,” he explained, “it’s the basis of all sports. And I found those track and field athletes, when I was doing it back in the ’60s and ’70s, to be more introspective than any athletes I’ve ever interviewed.”

Whitaker seemed to perfectly understand how major sports events are just available metaphors for triumph and loss in life’s bigger games. He seemed acutely aware of that, and, as TV critic Shefchik points out, he was “one of the few TV announcers who was given both the time and the mandate to be eloquent” about sports, and about life.