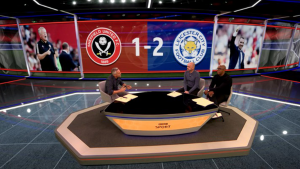 “dock10 is among UK’s prominent facility providers that broadcast titans rely on for a seamless production and we needed the best of everything for our clients.” said Richard Wormwell, Head of Production Innovation. “You need a reliable, agile and futureproof product that provides your creative team the utmost room to perform. We’re happy to have this package with ZD”.

Zero Density team was on the field during the installation and implementation stages before the kick-off. “dock10 team was a great asset during the set ups and; their technical know-how and professionalism hint the impressive work the audience will experience.” said Kuban Altan, VP, Research and Development at Zero Density.

Ulaş Kaçmaz, VP, Sales / Marketing comments on the project: “We are thrilled to assist dock10 in taking live broadcast to another level. The teams of dock10 strive for innovation and empowering storytelling and as a result shows will illustrate technical and visual excellence by effectively utilizing the immense capabilities of Reality Engine.”

The virtual studio employs the StarTracker camera tracking technology from Mo-Sys. Michael Geissler, CEO of Mo-Sys said: “We’re delighted to be supporting dock10 and the BBC for this historic and highly prestigious football programme. StarTracker was made specifically for these types of live productions and we are honoured to have the opportunity to help them transform their production results. In addition to working with the creative team at Zero Density for this project, this has been one of our greatest achievements to date”.

“The BBC football contract is held in high esteem by all at AE and we are immensely proud to have collaborated with BBC Sport and dock10 at such a pivotal moment in their iconic coverage of the nation’s favourite sport.” commented Lewis Phillips, Production Director at AE Graphics