ESPN has reached a new multiyear deal with the West Coast Conference (WCC) through 2026-27, beginning with the upcoming college basketball season. The new agreement is part of a long-standing relationship with the WCC, which began in 2006.
As the primary national rightsholder, ESPN will televise 17 regular season men’s basketball games across its networks, including a number of games during conference play. Selections will be made prior to any other WCC media partner. 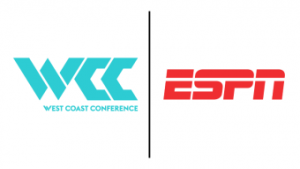 In addition to regular season coverage, ESPN will also air the quarterfinals, semifinals and championship game of the men’s basketball tournament, as well as the women’s championship title game. Those games will be a part of ESPN’s industry-leading conference championships slate during Champ Week.

“The West Coast Conference is a valued long-time partner and a premier basketball conference,” said Nick Dawson, ESPN vice president of programming and acquisitions. “We look forward to continue showcasing the conference’s best matchups and teams throughout the season, and for years to come.”

“We are thrilled to continue our long-standing relationship with ESPN,” said Gloria Nevarez, WCC Commissioner. “We are grateful for the outstanding support from our national television partners and are very excited to showcase the WCC as a premier men’s basketball conference on a national platform.”

All games aired on an ESPN network will also be available through the ESPN App, computers, smartphones, tablets and streaming devices to fans who receive their high-speed Internet connection or video subscription from an affiliated service provider.