The Rugby World Cup in Japan has a little bit more than three weeks to go (the final is set for Nov. 2) and NEP Major Events is on hand to produce technical and production personnel and kit for coverage of all 48 matches at 12 venues. Two divisions — NEP Singapore and NEP UK — are in country for the efforts with NEP Singapore providing four SDI-based fly kits while NEP UK is providing four IP-based fly kits. 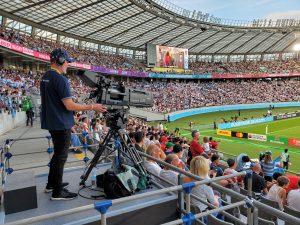 “We have four ‘extras’ kits, which is an additional four cameras and an additional EVS that we move around separately to cover the bigger games,” he says. “And then we have eight tech teams. So, it’s been quite a jigsaw trying to move all these pieces around.”

For Donald Begg, director of technology, NEP Major Events, having four SDI and four IP-centric fly kits gives him and the rest of the team a chance to compare and contrast the use of SDI and IP for the same event. The four IP systems worked as one for Wimbledon Broadcast Service this year via Grass Valley IQ modular systems that work in conjunction with Arista Network switches. The four separate kits each have a Grass Valley K-Frame Kayenne production switcher, Calrec audio consoles, and Imagine Communications IP3 routers and EVS replay servers.

“We did Wimbledon this year and brought it back to base and divided it into four pre-configured, and then sent them on their way to Japan,” he says. “We’re still very much in a transition phase, which is dictated largely by equipment lifecycles,” he says of the move to IP. “Most of our CCUs and EVS are still SDI interfacing but the vision mixers have progressed to IP.” 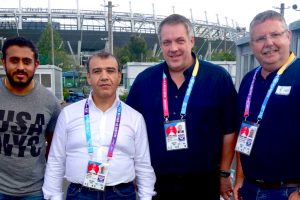 Fletcher says another challenge is that the matches are being covered by four different production teams: one each from France, UK, South Africa, and Australia.

“They each have their own way of working and we had a workshop in Bracknell [UK] where we tried to set out parameters for them to work in,” he says. “But when you get on-site each director and producer has a slightly different way of working.”

Adding another layer of complexity is that if there are back-to-back matches in a stadium two different production teams with two different styles and needs require a bit of a production reset. For example, each director tends to number the cameras in the camera plan differently so that a camera five one day may not be camera five the next even though the cameras are in the same positions.

“Your monitor wall changes as do your UMDs, tallies, and names of the EVS servers,” says Siddhartha Tyagi, technical manager, NEP Broadcast Solutions Singapore. “There’s a lot to do, so you have to keep preparing for the incoming production crew.”

The complexity of the production was also increased as there are three different production outputs from each show: 4K, 1080p, and 1080i.

“Those three signals are going straight from the camera CCU into the routers and then feeding the switchers and then to the IBC or the rightsholders,” says Tyagi. “There can be up- and down-conversion coming in as well so there are a lot of moving parts.”

“This was the ideal opportunity to bring the UK and Singapore together,” says Fletcher.

Saeed Izadi, president, NEP Broadcast Solutions Singapore, says the efforts represent one of the core values of NEP: working as one.

“This is where the practicality of that core value comes into play, with divisions coming together for larger events,” he says. “And if you look across the verticals within the NEP Group — be it our broadcast facilities business or specialized cameras or RF or Mediabank, AR/VR, connectivity — it’s where that core value comes together.”

Begg says that at the 2018 Winter Olympics in PyeongChang NEP had more than 10 different divisions working together on Eurosport’s efforts and at the Super Bowl this year NEP UK and Bexel both worked on the same event.

“We can take advantage of being a group, bringing the kit and the people we need to bring and then using local [kit and personnel] where practically possible,” he says.

A big difference between this event and those is that the equipment here is always on the move as SOS Global is working with the NEP team to get the kits from one match to the next.

“This system moves every day, whether core, prime, or extra — or the tech teams,” says Fletcher. “From that complexity point of view, this certainly feels bigger than the Olympics. It’s a complex logistical maneuver.”

Fletcher says the legacy of the Rugby World Cup is that has enabled the NEP Singapore and UK teams to work more closely and understand each other’s workflows and processes. Izadi says the unique workflow of the event, with multiple formats and standards coming together added an additional layer of complexity but Fletcher says it has been a successful effort.

“There were issues to be ironed out, but it has all come together,” says Fletcher.

Adds Begg: “It is about people and the quality of the people,” he says. “We have about 230 people in country for this event and you can have the shiniest kit in the world, but you need the people to make it work. Technology is as good as the people who drive it and I doff my hat to the guys in the crews.”