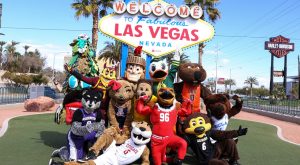 “Last season provided a tremendous showcase for our Pac-12 men’s and women’s basketball tournaments taking place in Las Vegas,” said Pac-12 Commissioner Larry Scott. “We are thrilled to continue the events at T-Mobile Arena and Mandalay Bay Events Center and to continue working with MGM Resorts and Las Vegas Events to provide the most entertaining experiences for our student-athletes, universities, and fans.”

For the first time last season, the Pac-12 women’s basketball tournament was held in Las Vegas. Following the excitement at the MGM Grand Garden Arena for its first year, this season’s event transitions to the Mandalay Bay Events Center where it will remain through 2022. Propelled by an elite showing of talent across the sport with half of the league’s programs competing in the 2019 NCAA Tournament, the Pac-12 Women’s Basketball Tournament has recorded seven of its top eight all-time best attendances in its 18-year history over the last seven seasons.

“We are excited to extend our partnership with the Pac-12 Conference for both their men’s and women’s tournaments through 2022,” says George Kliavkoff, president of Entertainment & Sports, MGM Resorts. “Las Vegas has become an incredible destination for sports lovers—on both the collegiate and professional levels—and we know there is no better location for these events to be held. With some of the nation’s top teams coming from the Pac-12 Conference, MGM Resorts looks forward to offering thrilling college basketball action at both T-Mobile Arena and Mandalay Bay Events Center for the next three years.”

Now entering its eighth-consecutive season in Las Vegas, the men’s tournament has grown into one of the nation’s most exciting and fan-friendly postseason championship events since moving to the city. As the epicenter for college basketball conference tournaments, with Las Vegas hosting more than any other city in the country, the Pac-12 tournaments for both men’s and women’s basketball are the only to take place on the Las Vegas Strip. Over the past three years of the men’s tournament at T-Mobile Arena, two of the top four most-attended tournaments have taken place.

“Since 2013, the Pac-12 Men’s Basketball Tournament has been an outstanding addition to our March calendar of the events that also includes three additional college conference tournaments,” said LVE President Pat Christenson. “Combining the prestige of the Pac-12 Conference with the power of the Las Vegas brand has created a memorable experience for the attendees, coaches, and student-athletes. With the addition of the Pac-12 Women’s Basketball Tournament, we look forward to further enhancing this partnership through 2022.”

“We’re thrilled to see the Pac-12 continue to hold both the men’s and women’s basketball tournaments here through 2022,” says Steve Hill, CEO and president of the Las Vegas Convention and Visitors Authority. “It’s exciting