BlizzCon 2019: As Esports Presence Grows, So Too Does Size of Blizzard Entertainment’s Production

One the biggest weekends on the annual gaming calendar takes over the Anaheim Convention Center today, as 40,000 fans come together for BlizzCon 2019. While many of the headlines coming out of BlizzCon will once again focus on the big video game releases and announcements from game publisher Blizzard, the convention’s live esports stages have garnered more and more interest with each passing year. 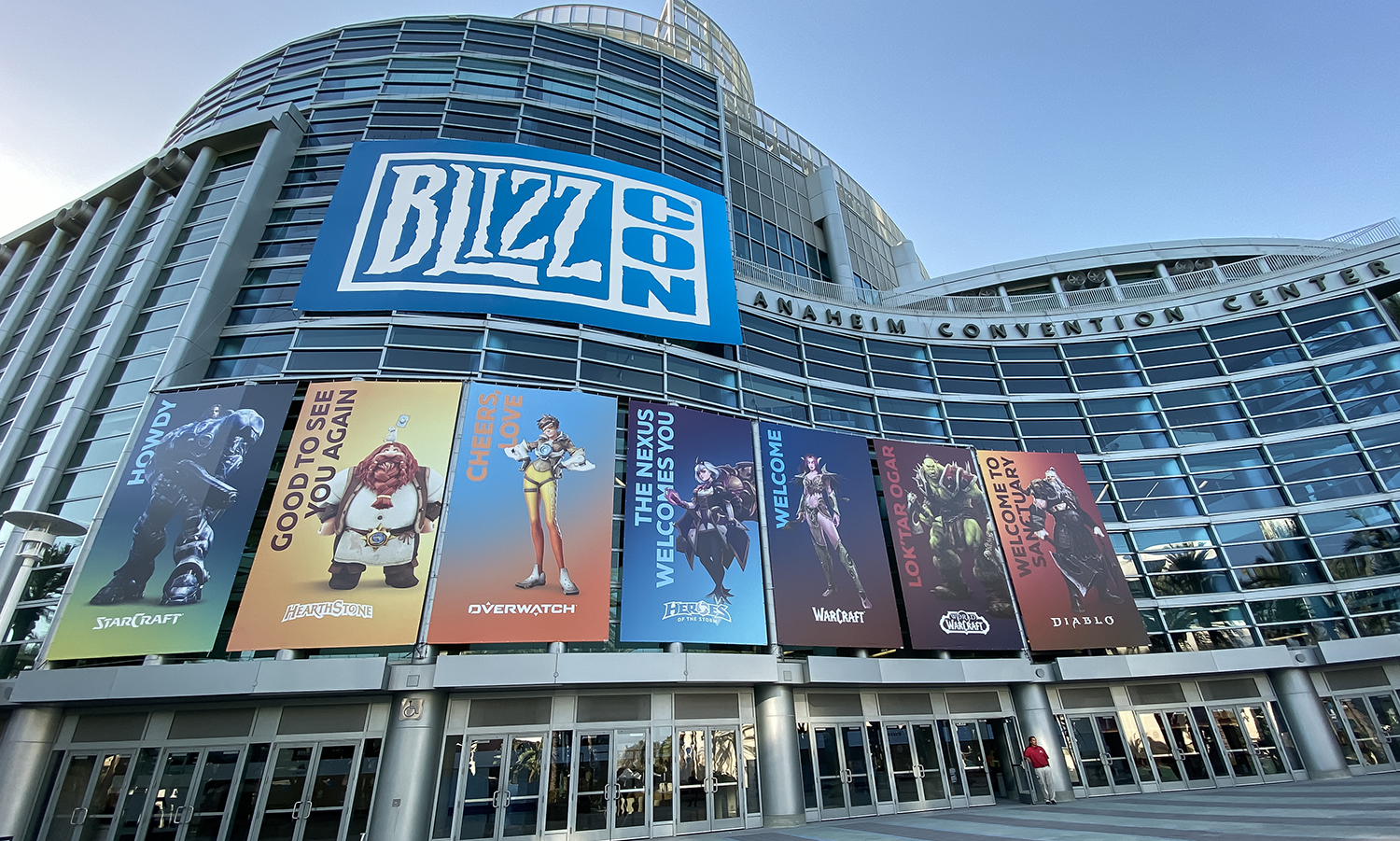 “This is my seventh BlizzCon, and when I started in 2013, our esports stages were pretty basic and bare bones — not unlike most of the esports industry at that time,” says Pete Emminger, VP, global broadcast, Blizzard Entertainment. “So I’m extremely proud of not only what the whole team here has done, but also how the entire esports scene has grown and developed. In 2013, when we would open the doors, people ran directly to the front row of the gaming stages. Now, we’re actually seeing so many people run in to sit in the front row of the esports stages first. That’s been a pretty exciting shift in fan behavior.” 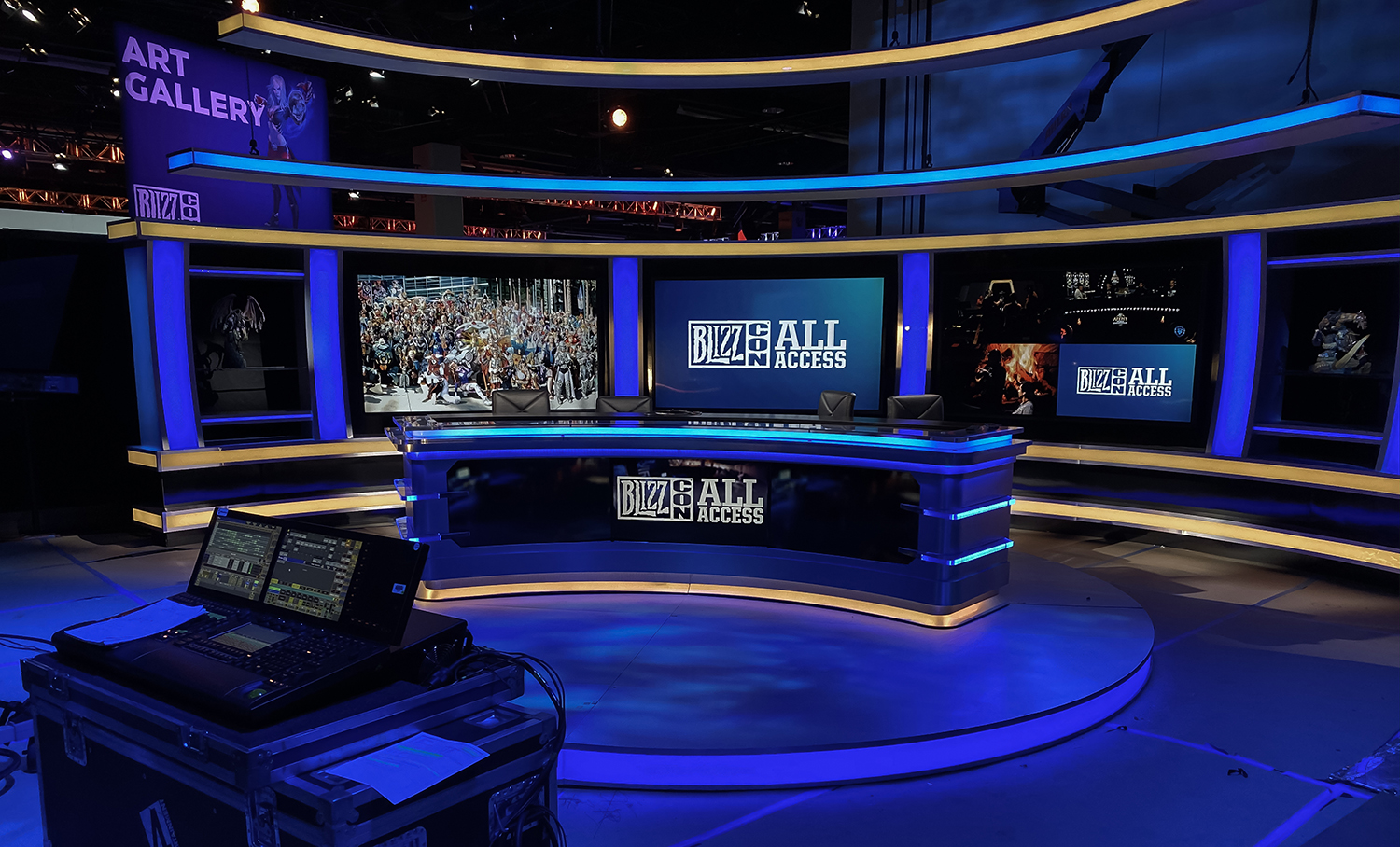 As the interest in esports has grown, so too has the size of the onsite production. This year, three of BlizzCon’s seven content stages are dedicated to esports with five tournaments taking place over the next two days: the Hearthstone Global Finals, StarCraft II World Championship Series Global Finals, World of Warcraft Arena World Championship, World of Warcraft Mythic Dungeon International, and Overwatch World Cup.

“When we think about BlizzCon, we look at it as a confluence of multiple experiences: it’s part theme park, part sports experience, and part convention,” adds Emminger. “But it’s all one celebration, so our job is to [deliver] that experience in a compelling way to people here at the live event and watching the broadcasts.”

Blizzard Entertainment has rolled out eight trucks (including A and B units) and two flypacks to cover the septet of stages in Anaheim: TNDV’s Exclamation at the Mythic Stage (mainstage), Dome Productions’ Journey (with a B unit) at the All-Access Channel Stage, NEP’s custom flypack at the Epic Stage (general content), TNDV’s Gracie and a custom NEP flypack add-on at the Legendary stage (general content), Dome’s Vista at the World of Warcraft Esports Stage, NEP M15 (with Blizzard’s observer room B unit) for the Overwatch World Cup (Saturday) and StarCraft (Friday) Esports stage, and Clark Media’s 4K-HD-Mobile for the Hearthstone Esports stage. 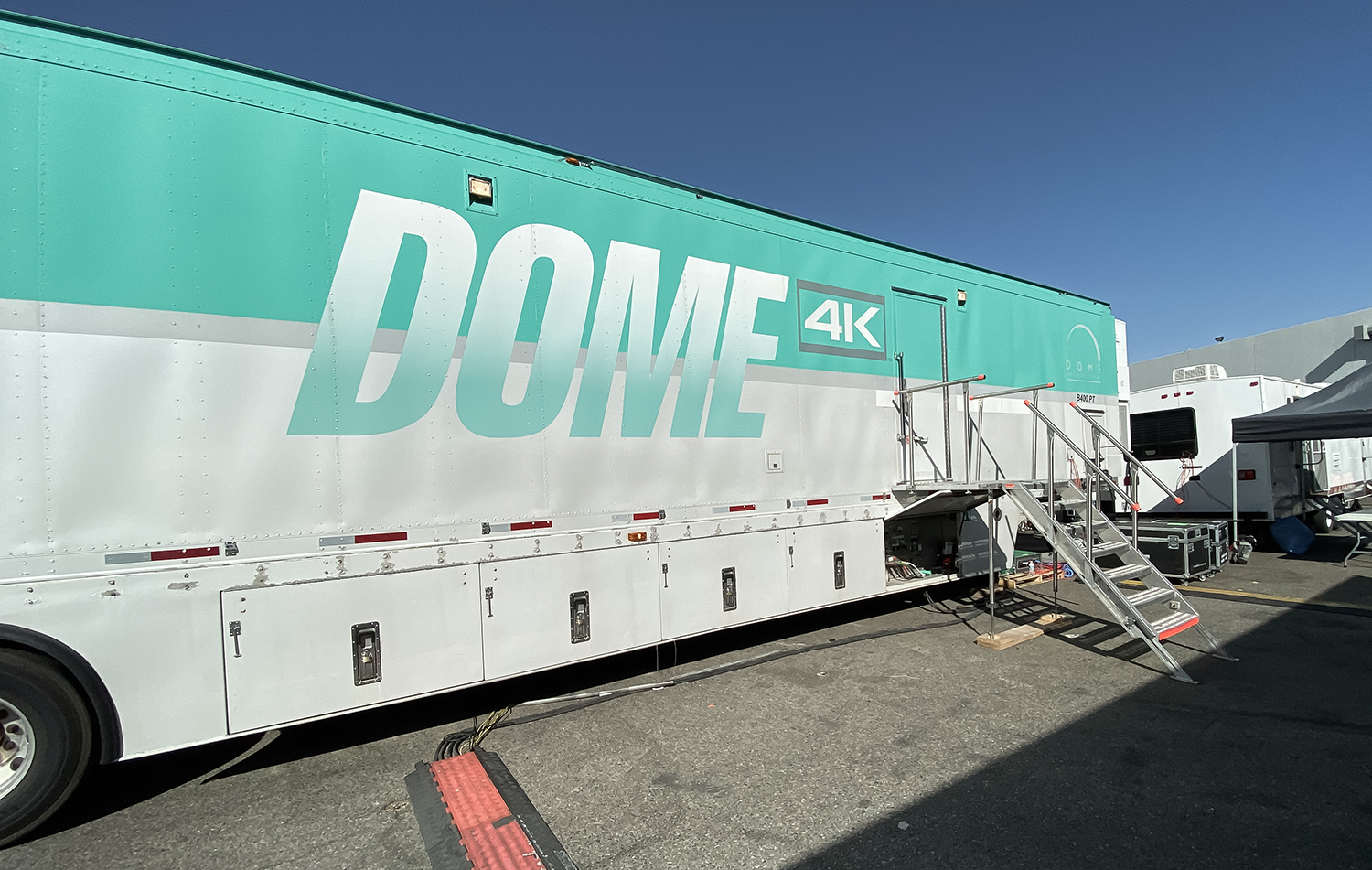 Dome Productions’ Journey and Vista units are on hand at BlizzCon

Each truck’s crew produces both the live in-venue LED board coverage and the broadcast/streaming coverage from their respective stages (as is customary in esports productions). All facilities have connected back to Blizzard’s master control area via 96 miles of fiber cabling.

Load in for the massive operation began last Wednesday (Oct. 23) with power rigging and cabling, then master control began setup on Saturday (Oct. 26) and trucks pulled in on Sunday (Oct. 27).

“With 40,000 attendees and all these broadcast stages, there’s a pretty extensive [load-in] for BlizzCon, as you can imagine,” says Emminger. “And all these things have to work in concert in terms of sharing loading docks and resources because we are also offloading dozens and dozens of trucks of merchandise and setting up the store at the same time we’re setting up the broadcast. So it’s a very choreographed load-in process.” 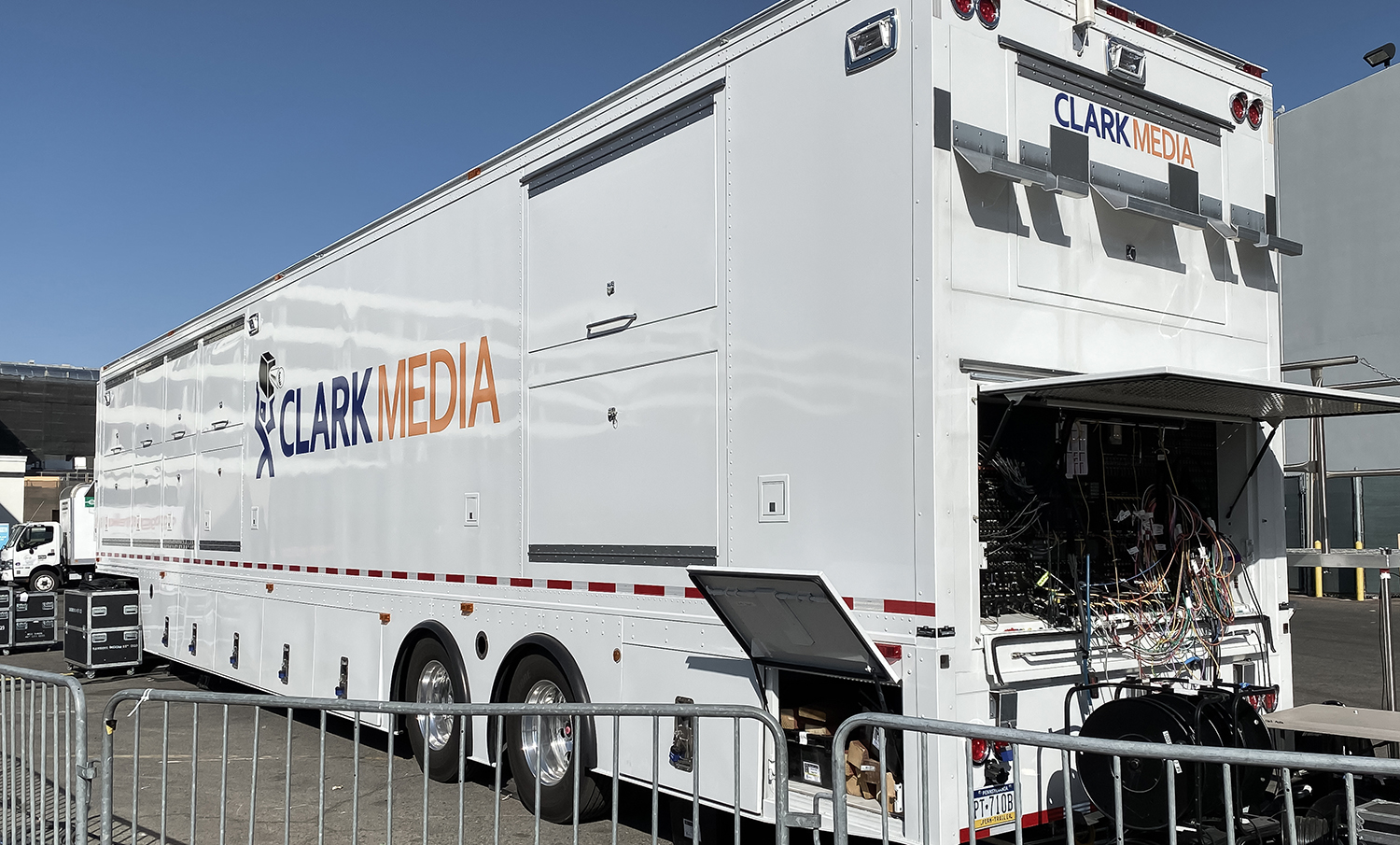 Clark Media’s 4K-HD-Mobile is producing the the Hearthstone Esports stage at BlizzCon.

“StarCraft still continues to be such a popular esport for us, especially at BlizzCon, that we wanted it in a bigger room,” says Emminger. “But at the same time, World Cup is bigger than ever, so we actually brought out some of our multi-language casters onsite this year. It’s always better for the broadcast to have the commentators onsite so [viewers] get to hear and feel the audience, and our fans [onsite] can walk right up to [the caster booth] and interact. That changes some of our tech workflows for us because we’re not doing all the remote routing as we’ve done in the past and we think it really makes a difference for the fans.”

In all, Blizzard has deployed more than 80 cameras throughout the Anaheim Convention Center, including 48 broadcast cameras, 17 robos, and 22 POVs. A whopping 33 observers (analogous to an in-game camera operator) are also onsite operating out of Blizzard’s custom observer unit producing the live in-game feeds for the esports broadcasts. Between the trucks and flypacks, the broadcast team has 180 EVS replay channels at their disposal and 22 channels of CG for graphics (including Vizrt, Ross Video Xpression, CharacterWorks, and Blizzard’s custom graphics engine).

Feeds from all stages are routed back to a central master control area at the convention center, which feeds both the in-venue show for fans onsite and broadcasts for fans streaming at home. 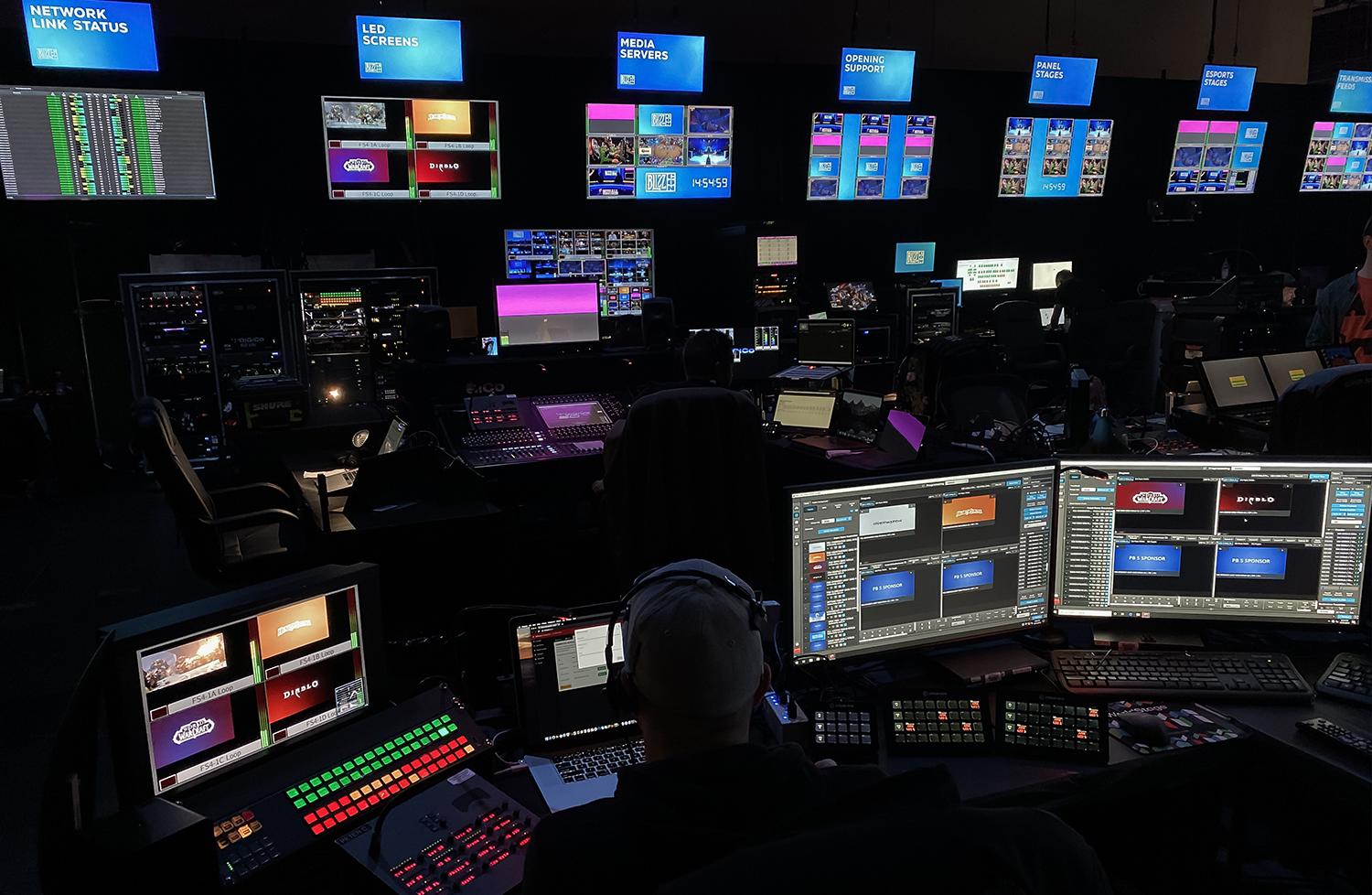 Blizzard Entertainment’s master control is at the center of the BlizzCon production.

“This is where we’re a little different from a show using a traditional IBC [international broadcast center] setup because we actually mix and control all the live screens across the whole [convention] — as well as all the broadcast routing — out of one facility,” says Emminger. “One side of Master Control is more focused on the live LED screens and routing between the stages, while the other side is focused on the transmission and broadcast management side — but it’s all under one unified Master Control facility.

The most significant change this year on the broadcast ops side has been Blizzard’s shift to Riedel Communications’ MediorNet platform for signal transport and distribution. The Riedel MediorNet backbone is routing 168 Gbps of video traffic and is managing all of the master control infrastructure.

“The reason we have a single combined MediorNet system is because we can literally take any feed at any time and send it anywhere we want,” says Emminger. “We do this for live [in-venue] audience reasons as well as broadcast reasons. Let’s say we have a crowd building up because there’s some unexpected upset on an esports tournament and then another stage right next door has a down period between their content. We can actually then just route that live esports stage right over to the stage next door so fans can watch and it just expands the experience. We can do that because we’re all on the same MediorNet workflow.”

Post Hub: Centralized Postproduction Operation Back for an Encore
After a successful debut last year, Blizzard has expanded its Post Hub operation onsite in Anaheim with a total of 26 editors on-hand working in shifts of 18 at a time. The Hub centralizes all postproduction operations (previously, each stage handled its own post) for all seven primary broadcasts, VOD delivery online, and social-media content support for all of Blizzard’s global outlets. 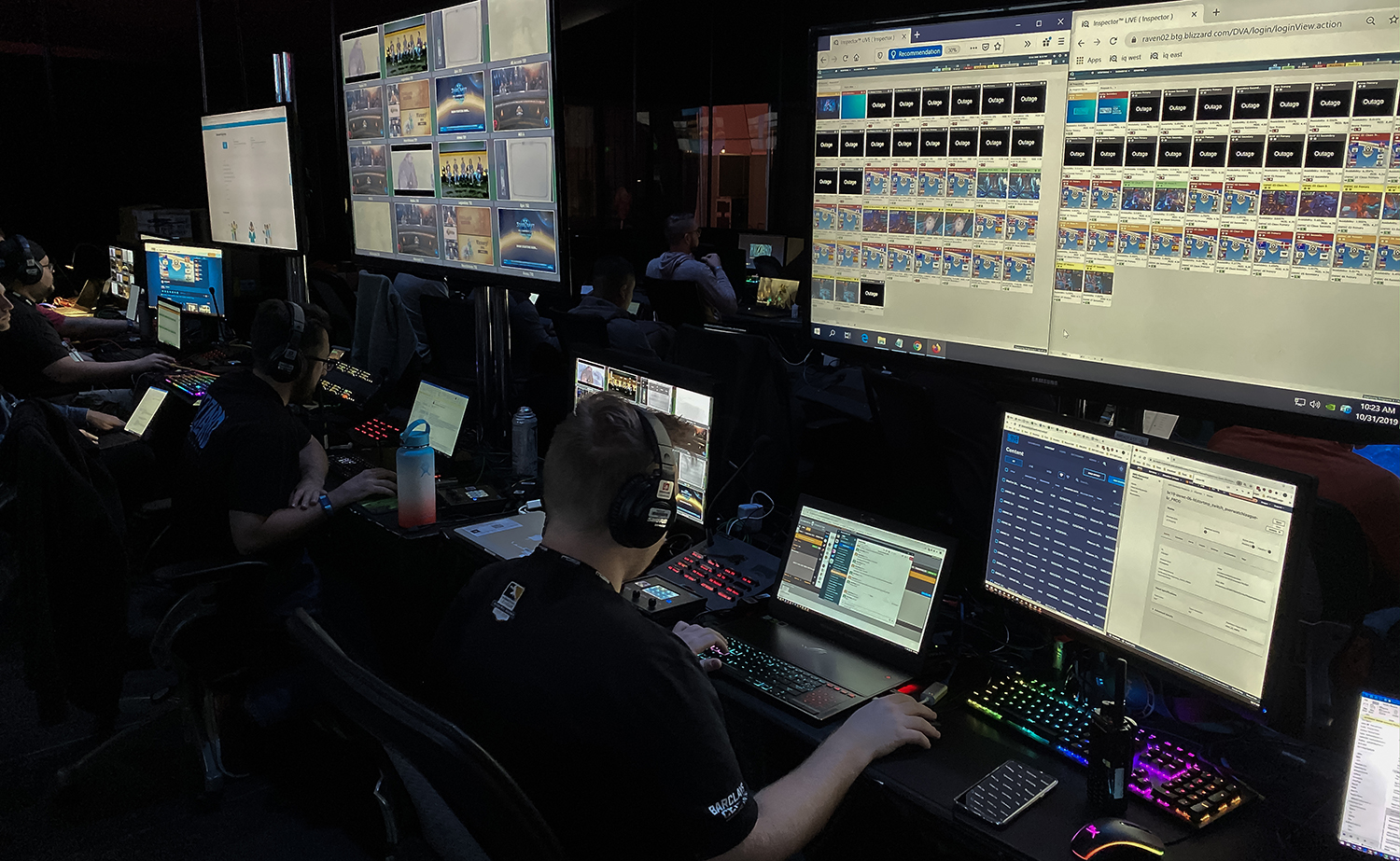 The team is equipped with 190 TB of OpenDrives NAS storage (Blizzard is expecting to store roughly 45 TB of content throughout the weekend), SwiftStack for cloud storage, and is connected to master control via a 10-gig pipe. Blizzard has also established a 40 Gbps internal network between EVS playout and the live production units with 16 EVS streams being captured.

“We’re heavily tied into the EVS network and the editors also have access to all the other record streams from the whole show in case they get a content request in from a producer or one of our other teams,” says Emminger. “The Post Hub has grown very quickly in just a couple years and has been a huge addition for us.”

Transmission: Content Streams Aplenty
With a truly global audience looking to tune in to BlizzCon, the Blizzard broadcast team is tasked with serving a multitude of different languages and regions. As a result, the BlizzCon production includes a whopping 269 unique transmission paths, including 194 unique content streams (others are duplicate content).

All 269 transmission paths are managed via AWS Media Services and are fully redundant so that a single source failover is completed automatically within 33 milliseconds. On the VOD and publishing side, Blizzard has 1,000 EC2 (Elastic Compute Cloud) instances in AWS supporting video transcode.

“It’s a pretty significant challenge and it only grows every year,” says Emminger. “For example, we’re [distributing] the Mythic Stage eight languages, so that’s eight unique content streams. When you add it all up, it’s really pretty amazing the amount of content coming out of here.”

All-Access coverage from BlizzCon can be live-streamed via the BlizzCon 2019 Virtual Ticket. In addition, coverage of the opening ceremony, all of the BlizzCon esports tournaments, and select developer panels can be streamed for free at BlizzCon.com and in the BlizzCon Mobile App.