New research from Imagen, the leading video management platform for clients such as Major League Baseball and the English Premier League, strongly suggests a generational shift is happening among sports fans across the major U.S. pro-leagues. Younger fans – Millennials and GenZ – showed a desire to interact with sports content beyond live games and a strong preference for more personalized engagement with content, a shift from the traditional fan and league relationship. 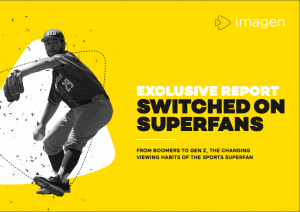 In fact, four times as many Millennial and GenZ fans watch over three hours of non-game sports content each week compared to Baby Boomers. 78% of fans enhance their live experience with non-game content by dual screening while watching a live game and 39% of Millennials are willing to pay for exclusive online sports content.

While GenZ and Millennial fans consume the most non-game content, they’re also the most underserved audience, signaling a big opportunity for sports leagues, teams and even players to engage with them by delivering the content they want: archived videos, behind-the-scenes footage, funny clips, documentaries, stats and player data.

Differences are also reflected in the way fans consume content across each league. Of note, MLS fans watch significantly more non-game content than other league fans and twice that of NFL fans.

Being a sports fan is no longer just about the game itself – the research shows fans want to feel part of the narrative, but also curate, share and play with their own content in a community. Millennial and GenZ fans are more likely to comment, share and repost content than their older GenX counterparts.

“Providing authentic, high-quality video content that’s easy to access is critical to keeping fans across all generations engaged. Sports fans, particularly Millennials and GenZ, are craving a more personalized experience when interacting with their favorite sport, player or team,” said Ryan Rolf, CRO, Americas at Imagen. “Fans are taking the power into their own hands when it comes to content creation and it’s up to the leagues, teams, and players to keep up with this content consumption shift.”

Imagen partnered with Turnkey Intelligence to survey a total of 1,866 North American Sports fans and super fans split across the NFL, NBA, MLB, NHL, and MLS. The survey also investigated generational differences among Baby Boomers (55-73 years old), GenX (39-54 years old), Millennials (23-38 years old) and GenZ (18-22 years old). The data was weighted to ensure each league’s samples comprised 25% of each generation, ensuring that league results are comparable and not skewed by sample composition.