Located in northern California, Thunder Valley Casino is a AAA Four Diamond award-winning Casino Resort. As one of the region’s premier entertainment destinations, the casino recently decided to revamp its camera and support package to prepare for another season of concerts. 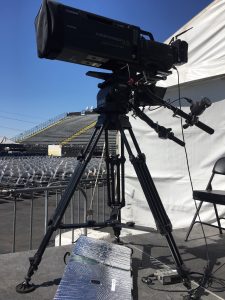 “Our concerts take place in two different areas. During the winter months, we have a 900-seat auditorium, and in the summer, we erect a custom 5,000-seat outdoor amphitheater. When I took over managing the AV department back in 2015, and after years of heavy use, we began to notice considerable breakdown on our aging video package,” explains Darren Scott, the Audio Video Manager at Thunder Valley Casino Resort.

Already equipped with sound and lighting system and two large video screens flanking the main stage, Darren worked with integrator, VMI, to make upgrades to Thunder Valley Casino’s entertainment and production venue. To round out the venue’s system, Darren decided to upgrade and increase the camera lens size to the Fujinon Digipower 55 box lens. The improved zoom lens would create better quality video for the screens and an excellent display for audience members at any place in the amphitheater. The move to a larger lens meant that other areas of the production would also be impacted.

“Before we upgraded to the Fujinon lenses, we were using two smaller Sachtler tripods for our two Hitachi Z-HD5000 cameras. Last year, after I received the approval to increase our lens size, and I knew we would need to upgrade our tripod to support the larger lens. I contacted Dennis [Dunrud] at VMI,” says Scott.

“Darren contacted me about improving the video production quality at Thunder Valley Casino’s entertainment venue, particularly in their large, outdoor Concert Stage. After visiting the venue, I evaluated their existing production system. Some of the products they had originally purchased were showing signs of heavy wear. Particularly their cameras and tripods,” says Dennis Dunrud, a sales manager at VMI.

Working through Cartoni’s US distributor, Manios Digital, VMI would bring Thunder Valley demo gear to ensure that the new supports met their needs.

“As I would make recommendations, we would bring in demo gear for Darren and his team at Thunder Valley Casino to try,” says Dunrud. “We were able to demo Cartoni tripod systems, including the Master 65 and a smaller system, the Cartoni Focus 22, which we recommended for use with their existing lighter camera packages and spider pods. They were quite pleased with the results. The broad selection in the Cartoni product line and the ability to use and test the products allowed Thunder Valley Casino to purchase with confidence. We were able to place their tripod systems in all of the customer’s other applications. Since then, they have been very pleased with the stability, durability, and overall performance of the Cartoni products. Darren has chosen to standardize all of their production tripods to Cartoni.”

For the entertainment team’s lighter packages, VMI helped Thunder valley choose the Cartoni Focus 22. As one of the most versatile products in the Cartoni tripod range, the Focus 22 can support small studio packages or ENG cameras, with a payload capacity of 6.5 pounds up to 48.5 pounds. In all, Darren would work with VMI to install two Cartoni Master 65 and two Focus 22 tripods to upgrade the entire production experience.

And going into their second season with Cartoni, the video team at Thunder Valley Casino Resort couldn’t be happier.

“The amount of control, stability, and overall function of the Cartoni tripods allows my film crew to function more effectively. They can focus on the performance rather than focusing on the mechanical issues that may arise with a subpar tripod,” says Darren.

He adds, “I would recommend Cartoni to any major film production. The product stands out amongst the rest.”