In a year when international sports are dominating Japan, it is only fitting that sports broadcasting and production was the main theme of Inter Bee 2019, Japan’s major broadcasting- and digital-technology exhibition. Gordon Smith, president/CEO, NAB, took to the stage to discuss the tight relationship between sports content, over-the-air broadcasting, and the future deployment of ATSC 3.0. 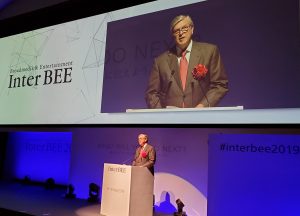 “It’s obvious to all of us that live sports content remains the most popular broadcast content worldwide,” he said. “The most-watched events are the Olympics and the World Cup, and, in the U.S., 18 of the top 20 primetime telecasts in 2018 were sports-related, with the NFL ranking the top spots. And all but one of those 18 shows aired on broadcast TV.”

Smith tied together the need for broadcasters to invest in innovation in order to serve local communities. Those investments expand and improve the quality of the content that viewers and listeners value.

“No other medium connects and supports the sports we love to fans and neighbors across the country,” he said. “Here in Japan, the same broadcast community provides the best sports content, and [broadcasters in the U.S and Japan] have a deep respect for each other and forums like this, where we share ideas and technologies. At NAB last year, we had over 1,000 Japanese attendees, and we appreciate our close working relationship with NHK at the NAB Show, where they have been a consistent exhibitor of advanced technology. The first HDTV system was shown in the U.S. at NAB in the late 1980s. Their contributions along with NEC on things like 8K, UHD, hybrid broadcasting displays, and other demos allow our attendees to see technological wonders they otherwise would not see anywhere.”

Noting that broadcast sports is the economic anchor for broadcasters in the U.S., Smith discussed the new opportunities around ATSC 3.0, the next-generation over-the-air broadcast standard that opens the door to reach sports fans in new ways. 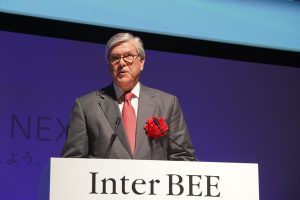 “It’s the world’s first broadcast standard with both broadcast and broadband together,” he explained. “Broadcasters will be able to deliver UHD video quality with theater-like sound, along with interactive applications and mobile reception. And the U.S. is committed to deploying it with 61 stations covering 70% of the U.S. to begin ATSC 3.0 broadcasting in 2020.”

The type of exciting next-gen applications that it will allow include things like giving sports fans the ability to pull up statistics on the same screen as the game itself. And the ability for reception on the go has caught the eye of rental-car companies like Avis and Budget while the ability to geo-target can provide a lifeline by allowing targeted public warnings to be delivered as efficiently as possible. And NAB is doing what it can to make sure broadcasters have maximum freedom in terms of the type of services that can be deployed.

“We are working with the government to ensure there is as much flexibility as possible for broadcasters to provide the very best services to viewers,” he continued.

He also gave the Japanese broadcasters, cellular-service providers, and consumer-electronics manufacturers credit for placing FM receiver chips in cellular phones and allowing consumers to receive FM signals on phones. In times of emergency, when cellphone networks can be unreliable, those efforts could save lives.

“Technologies are changing the game for sports broadcasters,” he said, adding that artificial intelligence will make it easier for the creation and distribution of sports highlights. “Broadcasting is becoming more immersive, more interactive, and a more personalized experience, and it will continue to evolve and transform the experience and also create new revenue streams.”