“Without Wirecast, we can’t do our job. We took a long time in selecting our live streaming platform – we evaluated multiple options – but Wirecast’s flexible license model, its multi-user operating system and the inherent stability of the platform on both Mac and Windows made the decision straightforward,” said Michael Reischer, Founder and Producer at Fourgreen TV in Berlin, Germany. 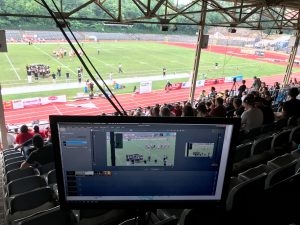 “We provide live streaming services to sports teams that otherwise would not appear on broadcast TV, enabling their fans to stay in touch with their teams and players over social media,” explained Reischer. “Wirecast is the bedrock of our live streaming workflow. It helps us create a really efficient workflow with easy to use settings. Wirecast is a professional production tool with some really great features such as multiple layers for editing, combined with drag and drop within those layers. Its stability and flexibility within a live production environment make it a powerful option and it’s competitive pricing opens up a large market of potential customers for this service.”

Wirecast is the only cross-platform, all-in-one live streaming production software that enables capture, live production and encoding of live streams for broadcast to multiple servers and platforms simultaneously. With powerful production capabilities, streamlined workflows, and expanded content source options, Wirecast offers the capabilities of more expensive hardware solutions with the flexibility and affordability of a software application.

A key Wirecast feature is its strong integration with the Facebook Live API. System features include streaming to pages, profiles, groups and events. There is an option for branded and sponsored content and place tagging; and live viewer and engagement tallies to monitor viewing audiences.

Other Wirecast production features include: