Since becoming a media entity in the United States, DAZN has slowly, but surely, gained ground in the streaming game. In 2019, the company experienced an entire year filled with continued growth. At the top, the highly anticipated rematch between heavyweight champion Anthony Joshua and Andy Ruiz Jr. garnered the title as the tmost-streamed event on the platform. 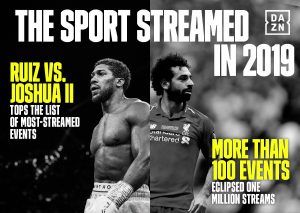 The Top 10 includes major football events, two bouts featuring consensus 2019 Fighter of the Year Canelo Alvarez and the professional boxing debut of YouTubers KSI and Logan Paul. In total, more than 100 events (107) each surpassed one million streams during the year.

Since launching in 2016, DAZN is now live in nine countries across four continents, including Austria, Brazil, Canada, Germany, Italy, Japan, Spain, Switzerland, and the United States.