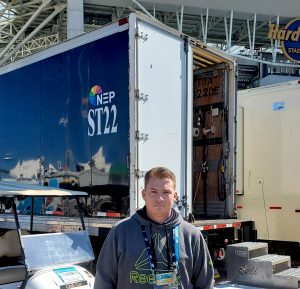 “With Bexel here doing infrastructure and support of trucks, Fletcher in robotics, AVS doing wireless video, CT doing all of the LED screens on the South Beach sets, and NEP’s trucks, we’ve been able to find some efficiencies,” says CT business executive Jason Newman. “The preproduction workflows are less siloed, and we can have easier conversations about things like space planning in a production truck and coordination of freight, timelines, schedules, and then pre-populating the trucks gets us in the right space.”

Truck-wise, NEP’s EN2 is onsite at Hard Rock Stadium for ESPN International, and ST25 is supporting the stadium’s perimeter video screens. Also parked in the international compound is Super B, serving as a hub for NFL Films signals; NEP EN1, producing the world feed of the game; Atlantic, involved with NFL tailgate; M15, for the Game Day Fan Festival; and Denali, the halftime show.

Bexel played a vital engineering and support role for the FATS (Feed a Truck Signals) cabin, the hub through which all signals pass and are then available across the domestic and international compound. It features an Evertz EQ26 with 544×744 inputs and outputs, Sony 4K monitors, Multidyne VF9000 fiber-transport frames, Genelec 5.1 monitors, RTS KP5032 panels, and TSL PAM MK2 audio monitors. Bexel is also providing 27 Canon box lenses and Cuescript promoters. 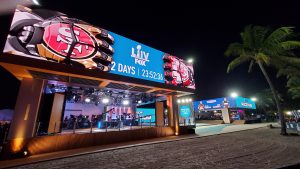 Newman has been closely involved with the South Beach Studios project because CT played a crucial role in the 5-mm videoboards that are wrapped around two sets and measure 310 ft. long by 16,432 pixels wide and have 12,287,000 active on-screen pixels.

“It took a lot of structural and engineering sign-off to get that done,” he notes. “Then, on the content side, we had to work with Vizrt and go through the workflow.”

The work by CT, Filmwerks (which built the sets), and Fox Sports raised the bar on Super Bowl Week studio facilities. Use of the LED signage gave the set a presence that integrated naturally within Ocean Drive on South Beach and its miles of neon signs, clubs, restaurants, and hotels.

“Hopefully, things like that will continue; it inspires the creatives,” says Newman. “The dollars-and-cents side is up to the marketing team to figure out, how to use and how to integrate that branding into the broadcast. As the week went on, everyone learned the rhythm of how to use the screens best. We want to help broadcasters realize how to leverage them.”