With North Americans deep into their third week of quarantine as a result of the coronavirus pandemic, many are looking for a welcome distraction from the stresses of the situation.

To help bring a sense of normalcy to fans, the NHL has launched “NHL Pause Binge,” a campaign across NHL.com, the league’s YouTube channel, and its various social channels that curates a robust collection of some of the NHL’s greater pieces of video content from its rich history. 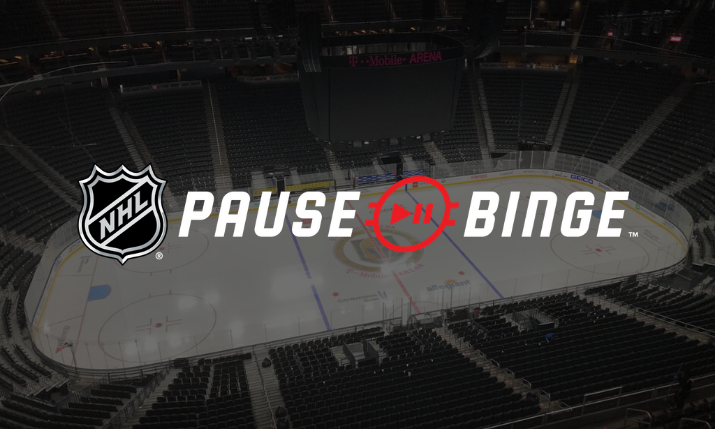 “Content, right now, is what people are yearning for and desiring,” says Steve Mayer, chief content officer, NHL, “and we put a lot of effort into giving people a bit more of their fill of hockey. This has been quite an interesting time, and we think we are putting out some pretty cool things and will continue to do so all the way through the pause. We’re trying to provide people at home, who are going through some really difficult times, with joy and entertainment. We know they love the NHL, and we’re trying to give them something they will enjoy.”

The chief goal of NHL Pause Binge is to put all this treasured content under one roof and make it exceptionally easy for users to find and watch. Among the content spotlighted are features from NHL Original Productions (including acclaimed series Road to the NHL Winter Classic, Behind the Glass, and NHL All Access) and full-length classic games from as long ago as the 1950s.

NHL.com and NHL’s social team are not only taking deep dives into the archive, releasing content plans designed to give fans happy memories to watch, but also providing activities and contests that fans can actively participate in. For example, Greatest Moments of the NHL Season…So Far features a tournament-style bracket of the year’s best moments for fans to watch and vote on.

According to Mayer, it has been important to remain sensitive to the current state of the world’s struggles. Immediately following the postponement of the season, the NHL content team wasn’t particularly aggressive in its video push, instead leaning more on retweeting and interacting with players and personalities who were reacting to the new environment. It wasn’t until about March 23 that Mayer and his team started to turn on the content spigot.

“In the sports world, everything happened so immediately,” says Mayer, “that one night changed the sports world forever. We immediately set the group on the idea trail. One of the biggest messages from me was that we want to stay respectful. A lot of people are going through a lot right now, including our players and everyone on the team level, and we need to respect that. Let’s just naturally let the first 10 days pass.”

In that time, to feed the NHL Pause Binge campaign, the operations team behind the NHL’s content machine needed to lean heavily into what, fortunately, were already existing cloud-based workflows. Fueled partially by the league office’s move to its new headquarters at One Manhattan West in the growing Hudson Yards, the NHL has been undergoing a digital transformation. The league has been migrating many of its core IT services to the cloud and was already seeing (even prior to the pandemic) a significant uptick in internal adoption of services like file-sharing, editing collaboration tools, video conferencing, and task-management software.

Naturally, all NHL staff are currently working remotely from their homes, but, according to a league spokesperson, most of the systems that service the editorial groups were already securely accessible from outside the office. The real challenge was ensuring that all producers and editors were outfitted with the equipment and, most important. the internet connectivity to handle this new archival-based workload.

“When we recognized that this was as serious as it is, one of the first things we said as a group was, How do we remotely stay in business,” says Mayer. “I think we were super smart in trying to be ahead of that. We made it so that our producers and editors could access our internal servers to be able to not only take down games and highlights and essentially be able to edit as if they were in our office. Our IT and studio-operations department were just incredible in allowing [our team] access. The team has been unbelievable in terms of thinking ahead and getting our entire group ready to go. We’re working around the clock. Honestly, we need to settle down with the new ideas because we are getting maxed out.”

NHL IT assisted in upgrading the internet download and upload speeds at the homes of the  remote workforce. In addition, the league is leveraging its asset-management system (Reach Engine by Levels Beyond), video-file–transfer system (Signiant Media Shuttle), and content file-sharing workflows (Box).,