With Socially Distanced NFL Draft, ESPN and NFL Team Up on One-of-a-Kind Production

ESPN VP, Production, Seth Markman: ‘This is the most complicated event I have been involved in’

In 1980, fledgling cable startup ESPN brought the NFL Draft into U.S. homes for the first time. Over the next four decades, the event exploded into a TV production in a class all its own. However, this year’s edition — the 40th anniversary of that first televised Draft — will truly be unlike anything viewers have ever seen. 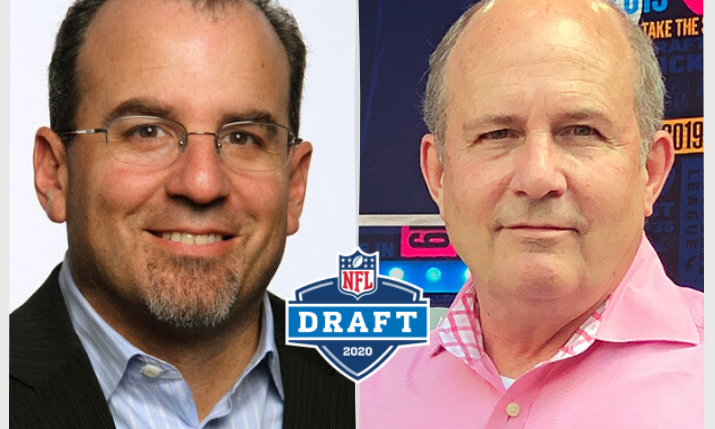 ESPN’s Seth Markman (left) and the NFL’s Mark Quenzel consider this year’s NFL Draft broadcast to be the most challenging show they have ever worked on.

Originally scheduled as a massive blowout in Las Vegas, the NFL Draft has taken on a completely new look in the face of the coronavirus pandemic. With limited personnel on the ESPN Bristol, CT, campus and hundreds of live video feeds zipping in from all over the country, ESPN and NFL Network will combine efforts into a single behind-the scenes production to present the Draft on ESPN and ABC for Rounds 1-3 (April 23-24), with a simulcast of Rounds 4-7 to follow on ESPN and NFL Network (April 25).

“It’s safe to say we’ve never had a year like this,” says Seth Markman, VP, production, ESPN. “[These are] very challenging circumstances in the midst of COVID-19, and yet we have a great opportunity to bring fans across the country a little bit of hope, a  bit of joy, and, maybe, a bit of an escape from what we’re all experiencing day to day.”

To pull it off, ESPN will be using studios and control rooms on the Bristol campus but under extreme safety precautions. On-air hosts and a few commentators will be in-studio, but the majority of analysts, reporters, and other contributors will participate remotely through production setups in their respective homes. That includes NFL Commissioner Roger Goodell, who will announce the early picks from his home.

On the production and operations side, ESPN has been up and operating throughout the pandemic (media is deemed an essential business in many states, included Connecticut). The Facilities Department has taken extraordinary steps in cleaning and setting up workstations that adhere to government-mandated social-distancing guidelines. According to Markman, on a typical Draft night, as many as 15-20 staffers might operate in a single control room. This year, each control room will be limited to seven people. In addition, the network is mandating that everyone working on the crew wear a mask.

“It’s tricky on a lot of levels,” Markman notes. “You are talking about producers wearing masks trying to communicate with the talent. Everything that’s going on in this broadcast is not ideal, but we do believe it is the safest environment.”

In all, Markman and NFL SVP, Production, Mark Quenzel estimate that the operations team will be juggling as many as 170-180 elements and feeds from various parts of the country. And that number is climbing by the day as the show continues to take shape. Approximately 58 of the feeds will be from the homes of Draft prospects, relying on not much more than home Wi-Fi connections. In addition, all general managers and coaches will have camera feeds from where they are drafting, with league-mandated protocols for when they can and cannot be used for air.

“I’ve been involved in Super Bowls, NBA Finals, Olympics,” says Quenzel, “and there’s nothing that even comes close to this. The thing we are really focused on is communication: not just communicating with so many more people than ever before simultaneously but communicating with most of them remotely and trying to make sure that that all works. That’s going to be a huge part of what we do: making sure that not only do we have all of the elements we need but that everyone knows when they are needed, what we are going to do, all in real time. That’s a huge challenge for everybody.”

Industry veterans who have worked on many of the largest sports production this industry has ever seen, Markman and Quenzel are frank: this is the greatest professional challenge either has ever faced.

“This is the most complicated event I personally have been involved in,” says Markman, who will hit 27 years at ESPN in June. “The coordination that it’s taking, the magnitude of the event we need to do here, the amount of feeds coming in, and the technology that we are trying to use [is all unique]. We haven’t been face-to-face with our employees to have any kind of meetings. I haven’t been in the ESPN building in three weeks. It has been complicated. I just don’t know what I can compare it to.

“We’re excited about it, and we do enjoy challenges,” he continues. “This isn’t one we’ve ever wanted to have, and we hope we never have to do it again. But I know everyone is going to rise to the challenge.”

Adds Quenzel, “We’re trying so many things that we’ve never done before. Some of them will work better than others. Some will not work as well as we had hoped, and we’re prepared to adjust for that. But, for me and for Seth, it’s worth trying.”

Stay tuned to Sports Video Group for more on the broadcast workflows being deployed for the 2020 NFL Draft.