When NASCAR decided to return to the track last month it kicked off a ripple effect on the team at Fox Sports that had to focus on how to work in new ways and have a production team spread across the U.S. that could work as one. An important part of that was the use of Haivision Makito X video decoders located in Fox Sports’ network centers in Charlotte, North Carolina and Los Angeles that could bring in multiple feeds and signals from the tracks.

“We’ve used Haivision for studio programming beginning two years ago and the challenge as NASCAR rolled around was being able to move around a large amount of video in realtime where we also had bandwidth restrictions,” says Brad Cheney, Fox Sports, VP of Field Operations and Engineering. “Haivision meets our latency methodology and offers clean, quality video so we relaunched with them.” 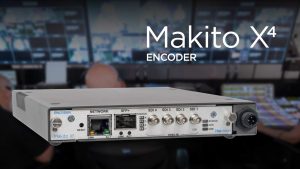 The Makito X encoder is being used by Fox Sports for NASCAR coverage.

Haivision’s low latency video technology was deployed in the field for the first time for NASCAR coverage to speed up the links while also providing bandwidth reductions. This allows both its production and broadcast engineering teams to work remotely and interact seamlessly with the onsite production and is all done on a private ethernet network between the track, LA and Charlotte, and a public network via the Haivision SRT Gateway providing low latency internet streaming for executives and production staff working from home. The NASCAR races mark the first time Fox is using the SRT Gateway.

At the broadcaster’s LA facilities, Haivision equipment enables remote replay and graphics operations. The team is comprised of three replay operators, two graphics operators as well as producers and assistant directors who are connected to and running machines in the mobile unit at the track. Fox Sports leverages the Haivision Makito X and SRT Gateway to bring back multi-viewers and other video sources back to them so that they can operate. 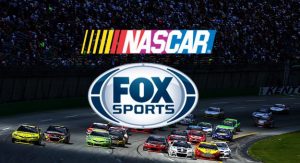 In Charlotte, meanwhile, producers and on-air announcers in Fox Sports’ facility in Charlotte are able to produce the race using multi-viewers enabled by Haivision Makito X and SRT Gateway so they can see the graphics that are being built in Los Angeles in real-time as well as the replay outputs. The producers in Charlotte tell the technical director at the track what replays are next.

Additionally, there are other engineers located around the U.S. involved in managing these networks. Video is sent via the private network back to LA where the Haivison SRT Gateway distributes all the feeds to Fox Sports’ executives, producers, and all of the engineering team so they can monitor for quality, timing, and quickly troubleshoot any problems. highlights that the latency is so low that it allows the engineering management team and executives to really be a part of what‘s going on rather than having to watch the race on satellite or cable TV with a delay of 8 to 12 seconds.

“In cases where we have the right amount of support and connectivity this opens up a new window for producing sports,” says Cheney. “It’s all about leveraging the best people for something and looking at situations where they might not be able to fly somewhere.”

The Haivision PlayPro app, meanwhile, allows for a feed to leave the track, head to Los Angeles, then get to the user at another location in less than a second.

Adds Mark Horchler, Haivision, director of product marketing: “Low latency and security over the Internet is key and the PlayPro app allows for the access of encrypted streams.”

Horchler says that one of the keys for Haivision encoders and decoders is extremely low latency coupled with features like sync of multiple streams over the Internet for multicam applications.

“A lot of producers, engineers, and executives are working from home and need access to live video feeds,” says Horchler of the ongoing COVID-19 crisis. “It’s accelerated the move to distributed workflows and those are probably here to stay.”

“The beauty of the Haivision technology is that it turns right on, everything just lines up and locks in, video is being transported, and people are ready to go to work,” says Cheney. “It’s a testament to how battle tested it is.”